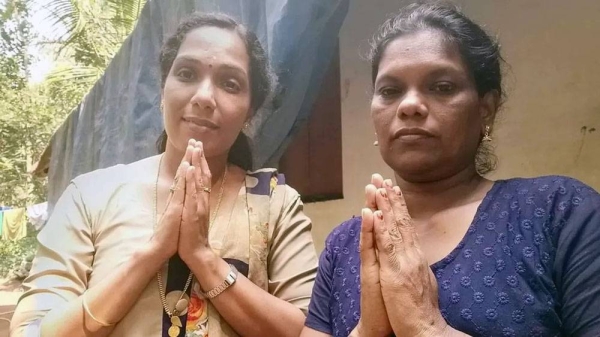 An Indian woman who asked for help to feed her children has received millions of rupees in donations from strangers on social media.
Subhadra, 46, who lives in the southern state of Kerala, had asked her son's teacher for 500 rupees ($6; £5) to buy food after her husband died.

Moved by her plight, the teacher started a crowdfunding campaign on social media.

By Sunday, the family had received 5.5m rupees in donations.]

Subhadra, who uses only one name, had been struggling to make ends meet since her husband's death in August.

She couldn't look for a job as the youngest of her three sons has cerebral palsy and requires constant care.

On Friday, she reached out to Girija Harikumar, a teacher at the local school where her middle child studies, for help as her children had nothing to eat.

Harikumar, a Hindi language teacher, told the BBC that she had asked the student, Abhishek, to tell her if his family was facing problems after his father's death. This was the first time the boy or his mother had asked for help.

"I gave her 1,000 rupees and told her I will do something," Harikumar said. She then visited the family and saw that they were living in grinding poverty.

"There was just a handful of grains in the kitchen and the children had nothing to eat," Harikumar said.

"I thought there was no point giving Subhadra small amounts of money now and then as it would be totally inadequate for the family," she added.

On Friday evening, Harikumar wrote a post on Facebook about the family's plight and asked people to help by sending any money they could afford.

She also shared Subhadra's bank account details in the post, so that the money could be directly transferred to her.

The post went viral and by Monday, Subhadra has received 5.5m rupees from kind strangers.

Some of the money will be used to finish a house that Subhadra's husband began building before he died. The rest will be deposited in the bank for their expenses.