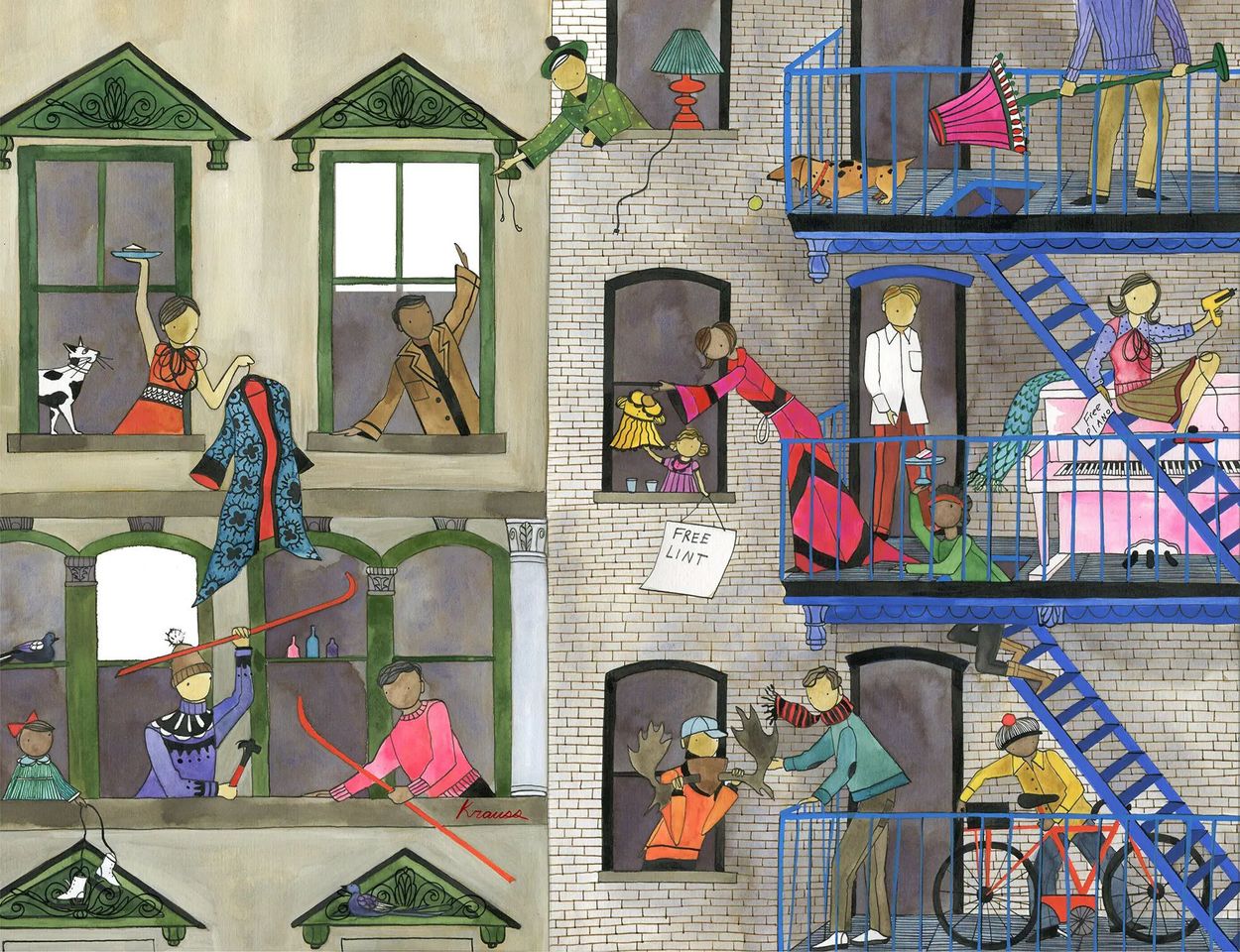 Inside the World of Buy Nothing, Where Dryer Lint Is a Hot Commodity

From medical supplies to half-eaten birthday cakes, Buy Nothing is fostering a quirky sense of community that is mostly fun and occasionally irritating.
David Stahl did not need leftover pickle juice because, really, no one needs someone else’s used brine. But a few months ago, he decided to ask for some just to see if it was possible, posting a request to an Upper West Side chapter of Buy Nothing, a hyperlocal Facebook group.

It turns out, people are willing to give away (and take) just about anything, if you ask. A week later, Mr. Stahl walked 10 blocks to a stranger’s apartment lobby and retrieved a one-gallon Mt. Olive jar of the pale green liquid.

“The doorman thought that I wanted the glass because it was such a large glass. I was like, ‘No, I just really like pickle juice,’” said Mr. Stahl, 30, a water resources engineer. He drank the brine with a friend, using it as a chaser for shots.

Welcome to the wild world of Buy Nothing, a network of social media groups, mostly on Facebook, where people give and receive things, treating the stuff taking up space in their homes as gifts meant to be shared and treasured. Members are encouraged to offer their time and talents, too, and loan items that someone may need for just a few hours, like a car or a cake pan. Created in 2013 by two women in Bainbridge Island, Wash., it has grown to 6,700 independent Buy Nothing Facebook groups in 44 countries. The Buy Nothing Project recently developed an app that it will release more widely in a few weeks.

Giving away the stuff that you no longer want is nothing new. Charities like the Salvation Army and Goodwill rely on these kinds of donations. And social media has made it easier for people to find free stuff on sites like Craigslist or through groups like Trash Nothing. But Buy Nothing turns the act of decluttering into a way to meet and befriend your neighbors. Because each group is geographically limited, sometimes encompassing only a few city blocks, and members are allowed to join only a single group, an active group can become a tight-knit trading post where a decorative birthday banner could make the rounds, shared repeatedly for months until it mysteriously disappears, as happened in one Brooklyn group earlier this year.

“We have plenty right here within each of our local communities to sustain us,” said Liesl B. Clark, one of the founders of the Buy Nothing Project. In the language of Buy Nothing, everything we possess has value, if you can find the person who needs it. “If we can reuse and refurbish and fix and repair and just keep recycling these items, nothing needs to be discarded,” Ms. Clark said.

Terms like “curb alert” or “first come first serve” are discouraged. You are not putting your stuff on the street hoping someone claims it before the trash truck comes. Instead, you are intentionally “gifting” your possessions. In this version of a gifting economy, where all items are of equal value, members are not allowed to trade or barter, as each object is seen as a gift independent of anything else. Such restrictions can prove frustrating for a member who may want to, say, trade goods for services.

The giver is encouraged to let an offer “simmer” for a period of time, selecting a recipient for some reason other than being the fastest one to reply. Members who raise their hands ask to “be considered,” and may offer a compelling reason for wanting, say, a table lamp. Or maybe they’re asked to tell a joke, or pick a number, and a winner is chosen. If you’re the lucky recipient of said table lamp, you may feel inspired to write a “gratitude” post, sharing your joy and photographs of the lamp in its new home.

The result, say group members around the country, is a sense of community that is mostly fun, sometimes quirky, and occasionally irritating.

Buy Nothing is “the only reason why I’m still on Facebook,” said Mr. Stahl, who has been a member since March. “There is no community meeting place anymore,” he added, except on Buy Nothing, where a member of his group recently offered a half-eaten birthday cake — a gift members were happy to take.

And it’s not just partially eaten food that people want. Oh, no. The list goes on.

There is the standard fare: used furniture, clothing, baby items and household goods. But the surprising things are what keep it interesting. In one Los Angeles group, used makeup, including lip gloss, frequently makes the rounds. Income disparity comes into sharp focus, too. In Silicon Valley, one group member gave away a piece of artwork that had, apparently, been bought for $10,000, while in the Germantown neighborhood of Philadelphia, members share essential items like canned food, cheese, milk and medical supplies.

Life lived in a gifting economy requires a measure of patience, a virtue that can be hard to find if you want to clean out your closet quickly.

“You have to let things simmer for a while. That can be a little annoying when you want something and you feel a little pressure that the group wants you to sit and wait,” said Janis Gross, 60, who teaches jewelry making and is a member of a Buy Nothing group covering Stuyvesant Town and Gramercy Park, in Manhattan.

Let the item simmer, as the group requests, and then you eventually have to choose one recipient among many. But how do you decide which stranger is deserving of your old ice-cube trays?

“It’s like getting picked for the basketball team — 10 people reply and how do you pick?” Ms. Gross said. “I don’t like the public nature of it. I don’t like having to say, ‘Sorry Mary, I’m going to give it to Fred.’”

Sometimes people don’t show up to claim their stuff, or make it difficult to arrange a time for a pickup. Private messages can get lost in Facebook Messenger, leading to confusion or disappointment. Some members seem to claim more stuff than others, simply because they spend more time on Facebook. When you know another member personally, which is likely when everyone lives in the neighborhood, you might offend a friend if you choose someone else to take your loot.

But for Ms. Clark, the public nature of the interactions is the point. The transparency allows members to keep one another in check. “Gifting communities are a window into human nature,” she said, adding: “We all have to get used to being uncomfortable in some situations.”

In a group that covers a large swath of Brooklyn, including Boerum Hill, Gowanus and Red Hook, a glass sex toy (unused, according to the giver) was a particularly popular item recently.

“The other day, somebody posted dryer lint,” said Susan Lightman, a member of that group. Dryer lint, she soon learned, has many uses, including as hamster bedding. “It’s just the randomness of it that is amazing.”

Ms. Lightman, who works in advertising, has given her fair share of random gifts, too, including a fish taco that she ordered but did not eat, and dirty water from her 30-gallon fish tank. Her husband doubted that anyone would want dirty fish water. But he was quickly proved wrong, as the nutrient-rich brew makes for excellent fertilizer.

She left a bucket outside her building, so members could come by and scoop it out. The dirty water was such a hit that she began offering it regularly, periodically announcing, “It’s fish-poop water time!”

Within hours, her neighbors would come and take it all.
#Facebook