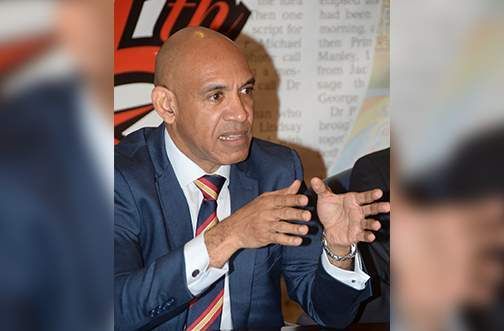 Noting that the police have been flayed for seemingly ignoring some acts which shock the public’s conscience, Commissioner of Police Major General Antony Anderson says the blame cannot be laid at the feet of law enforcers but rather on laws which have not kept pace with technology.
“When you speak of the future nowadays it’s no longer 50 years down the road; the future is five years down the road, and we have to be as fast as the digital world and as agile as that [because] the technology itself requires us to know and be able to function in a different way,” the commissioner said.

He was speaking at Friday’s launch of a series of training videos at the Office of the Commissioner of Police entitled ‘Digital Footprints — from Crime Scene to Courtroom’, which will be used as instructional material for investigators.

The creation of these videos, which are in the format of interviews with various JCF experts in the gathering and use of digital evidence, along with other stakeholders such as attorneys, was spearheaded by the Office of the Director of Public Prosecutions with support from the United States Embassy.

The series explores issues of law surrounding the use of digital evidence and is geared towards enhancing the capabilities of investigators to lawfully use technology to prepare their cases for court.

According to the police commissioner, “The truth of the matter is that our laws are not as agile as the technology, and it’s something we are going to have to look at because our public will see things nowadays that look like bad behaviour — even immoral things, improper things — but they are not necessarily illegal because such an offence has not yet been described in law.”

He said while members of the public in such instances will accuse the police of condoning bad behaviour and question why the individual is not incarcerated, the fact is “there is no charge to write because there is no such offence”.

“That is what is the reality of an evolving technological circumstance. This is not something we can wish away or slow down. It is something that is moving faster so we have to speed up to keep up with it,” he emphasised.

In the meantime, director of the International Narcotics and Law Enforcement (INL) at the Embassy of the United States in Jamaica, Linnisa Wahid, who also spoke at the event, said it was evident that the force has made strides to increase its capacity to investigate cyber-enabled crimes, adding that note has been taken of the use of forensic evidence to close cases.

“The US Government, through INL,is proud to partner with JCF [Jamaica Constabulary Force], MOCA [Major Organised Crime & Anti-Corruption Agency] and other Jamaican law enforcement entities to extract and use digital evidence to strengthen their investigations. As such I now plan to provide cyber experts to work with our Jamaican partners to ensure that Jamaica can increase its usage of forensic evidence during investigations and prosecutions,” she said.