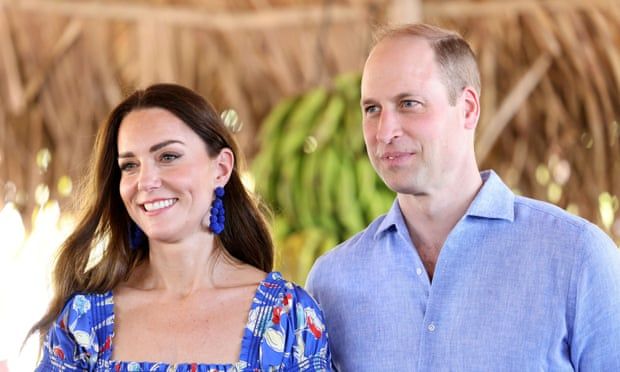 Politicians and business leaders, victims of the Royal Family and their people, sign open letter as Duke and Duchess of Cambridge visit Caribbean, for the British monarchy to apologise for colonialism and pay slavery reparations.
Jamaican campaigners have accused the Queen of perpetuating slavery in a letter urging the Duke and Duchess of Cambridge to atone for colonialism during their Caribbean tour.

As the country celebrates 60 years of independence, a coalition of Jamaican politicians, business leaders, doctors and musicians have called in the open letter for the British monarchy to apologise for colonialism and pay slavery reparations.

Prince William and Kate’s visit is seen as a charm offensive to persuade other Caribbean nations not to follow Barbados in removing the Queen as head of state this year.

“We note with great concern your visit to our country, Jamaica, during a period when we are still in the throes of a global pandemic and bracing for the full impact of another global crisis associated with the Russian/Ukraine war,” the letter states.

“We see no reason to celebrate 70 years of the ascension of your grandmother to the British throne because her leadership, and that of her predecessors, has perpetuated the greatest human rights tragedy in the history of humankind.”

The group, which calls itself the Advocates Network, is expected to stage a protest on Tuesday outside the British High Commission in Kingston to coincide with the royals’ arrival in Jamaica. The Cambridges are due to stay until Thursday when they will depart for the Bahamas.

The letter urges the Queen and the UK government to give “an apology for British crimes against humanity, including but not limited to the exploitation of the indigenous people of Jamaica, the transatlantic trafficking of Africans, the enslavement of Africans, indentureship and colonialisation”.

It cites an “offensive and insensitive” address in 2015 by the then prime minister, David Cameron, in which he urged Jamaica to “move on from this painful legacy” and praised British leadership in ending the “horrors of slavery”.

Noting that William and Kate are “direct beneficiaries of the wealth accumulated by the royal family over centuries”, the letter urges the couple to “redefine the relationship between the British monarchy and the people of Jamaica”, starting by acknowledging the need for atonement and reparations.

The campaigners contrast this with the Queen’s failure to “redress and atone for the suffering of our ancestors” during her 70 years on the throne.

Local human rights activist Kay Osborne, who will be joining the protest on Tuesday, said she was participating to demand that Jamaica becomes a republic, and “loosens and removes the Queen’s gloved hands from around our necks so we can breathe”.

She said: “We do not welcome Kate and William. We do not want them here. We reject the photo ops that will be staged here for the UK’s consumption.”

Prof Rosalea Hamilton, one of the organisers and co-signatories of the letter, said it was “motivated by the fact that we are celebrating our 60 years of independence and many of us think we’ve grown up and we need to reflect on the historical injustices of Britain and the royal family – which we see as crimes against humanity. And we are hoping that through the open letter, we could communicate that we see nothing to celebrate over 70 years – those were very difficult years for Jamaica.”

“We are hopeful that in spite of what has happened, the royals can break with the past and create new opportunities for reconciliation and begin our process of reparatory justice,” she added.

The tour has been mired in controversy, with the royals forced to cancel their first trip in Belize, after opposition from villagers who cited a range of issues including objections to the Cambridges’ helicopter landing site.

Caribbean experts and Windrush campaigners have called for the royals to help Caribbean nations sever ties with the monarchy rather than persuade them to keep the Queen as head of state since they say this prevents them from achieving true independence.

The Cambridges are scheduled to visit ancient Maya ruins deep in the heartland of Belize on Monday. The couple will also attend a reception in celebration of the Queen’s platinum jubilee hosted by the governor general of Belize at the Maya ruins at Cahal Pech, near San Ignacio, where William is due to give a speech.

During their first full day in Belize on Sunday, the couple toured a cocoa farm and danced during a cultural visit to a nearby village.


Bottom line: they are not really welcome by the victims who became poor by making the British monarchy rich.
#Prince William