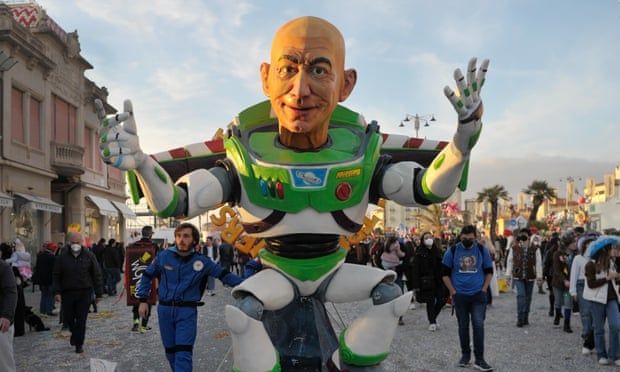 If we are going to send more humans to the Moon and eventually to Mars, will the goal be to benefit the people of the US and the world, or to make billionaires even richer?

On 20 July 1969, 650 million people throughout the world watched with bated breath as Neil Armstrong successfully fulfilled President Kennedy’s vision. The United States achieved what had seemed impossible just a few decades before. We had sent a man to the moon.

On that historic day, the entire world came together to celebrate the enormous accomplishment as Armstrong’s voice boomed from our television sets: “That’s one small step for man, one giant leap for mankind.”

In just eight short years the US, led by our extraordinary scientists, engineers and astronauts at Nasa, had opened up a new world for humanity. And while the entire world rejoiced, there was a special joy and pride in our country because this was an American project. It was our financing, our political will, our scientific ingenuity, our courage that had accomplished this milestone in human history. We had not only “won” the international space race, but more importantly, we had created unthinkable opportunities for all of humankind.

Fifty-three years later, as a result of a huge effort to privatize space exploration, I am concerned that Nasa has become little more than an ATM machine to fuel a space race not between the US and other countries, but between the two wealthiest men in America – Elon Musk and Jeff Bezos, who are worth more than $450bn combined.

After many billions of dollars of taxpayer funding the American people are going to have to make a very fundamental decision. If we are going to send more human beings to the moon and eventually to Mars, who will control the enterprise and what will be the purpose of that exploration? Will the goal be to benefit the people of the United States and the entire world, or will it be a vast boondoggle to make billionaires even richer and open up outer space to corporate greed and exploitation?

At this moment, if you can believe it, Congress is considering legislation to provide a $10bn bailout to Jeff Bezos’s Blue Origin space company for a contract to build a lunar lander. This legislation is taking place after Blue Origin lost a competitive bid to SpaceX, Musk’s company.

Bezos is worth some $180bn. In a given year, he has paid nothing in federal income taxes. He is the owner of Amazon, which, in a given year, has also paid nothing in federal income taxes after making billions in profits. Bezos has enough money to own a $500m mega-yacht, a $23m mansion in Washington DC, a $175m estate in Beverly Hills and a $78m, 14-acre estate in Maui.

At a time when over half of the people in this country live paycheck to paycheck, when more than 70 million are uninsured or underinsured and when some 600,000 Americans are homeless, should we really be providing a multibillion-dollar taxpayer bailout for Bezos to fuel his space hobby? I don’t think so.

Let’s be clear, however. This issue goes well beyond just one contract for Bezos to go to the moon.

The reality is that the space economy – which today mostly consists of private companies utilizing Nasa facilities and technology essentially free of charge to launch satellites into orbit – is already very profitable and has the potential to become exponentially more profitable in the future. Bank of America predicts that over the next eight years the space economy will triple in size to $1.4tn – that’s trillion with a “t”.

In 2018, private corporations made over $94bn in profits from goods or services that are used in space – profits that could not have been achieved without generous subsidies and support from Nasa and the taxpayers of America. The satellite business is growing rapidly. SpaceX alone plans to launch tens of thousands of its Starlink telecommunications satellites over the next few years.

In addition to the launching of new satellites, corporations like SpaceX will be making substantial sums from the “space tourism” business. Recently, three extremely wealthy individuals paid $55m each in order to visit the International Space Station. The good news is that if you are a billionaire tired of vacationing in the Caribbean, there are some exciting travel opportunities for you. The bad news is that American taxpayers are subsidizing some of that trip.

And while it may seem like a bad science fiction movie today, decades from now the real money to be made will not come from satellites or space tourism but to those who discover how to mine lucrative minerals on asteroids.

In fact, both Goldman Sachs and the noted astrophysicist Neil deGrasse Tyson have predicted that the world’s first trillionaire will be the person who figures out how to harness and exploit natural resources on asteroids.

Nasa has identified over 12,000 asteroids within 45m kilometers of Earth that contain iron ore, nickel, precious metals and other minerals. Just a single 3,000ft asteroid may contain platinum worth over $5tn. Another asteroid’s rare earth metals could be worth more than $20tn alone. According to the Silicon Valley entrepreneur Peter Diamandis, “There are twenty-trillion-dollar checks up there, waiting to be cashed!”

The questions we must ask are: who will be cashing those checks? Who will, overall, be benefiting from space exploration? Will it be a handful of billionaires or will it be the people of our country and all of humanity?

As it stands now, as a result of the 2015 Space Act that passed the Senate with virtually no floor debate, private corporations are able to own all of the resources that they discover in space. In other words, the taxpayers of this country who made it possible for these private enterprises to go into space will get a 0% return on their investment.
Advertisement

The time is now to have a serious debate in Congress and throughout our country as to how to develop a rational space policy that does not simply socialize all of the risks and privatize all of the profits. Whether it is expanding affordable high-speed internet and cellphone service in remote areas, tracking natural disasters and climate change, establishing colonies on the moon and Mars or mining asteroids, the scientific achievements we make should be shared by all of us, not just the wealthy few.

Space exploration is very exciting. Its potential to improve life here on planet Earth is limitless. But it also has the potential to make the richest people in the world incredibly richer and unimaginably more powerful. When we take that next giant leap into space let us do it to benefit all of humanity, not to turn a handful of billionaires into trillionaires.