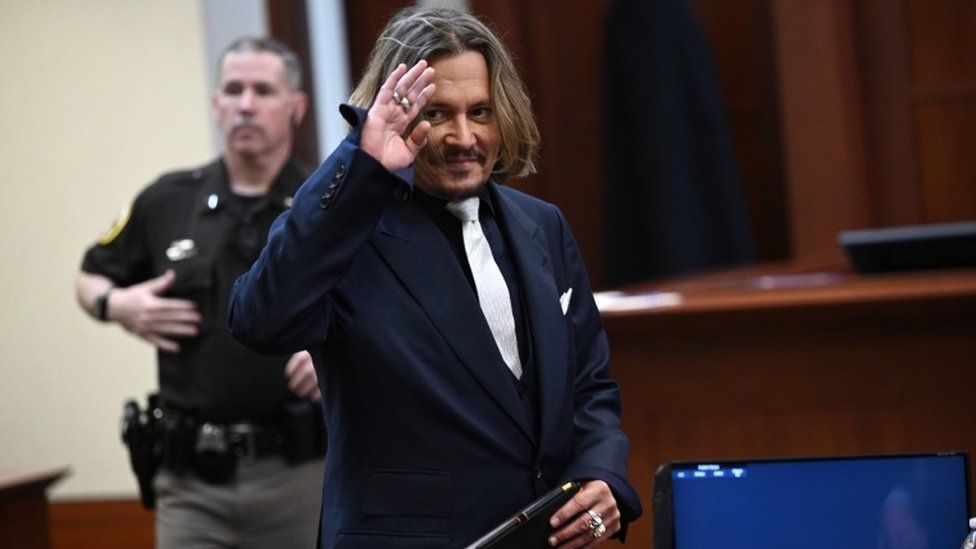 Lawyers for Johnny Depp branded Amber Heard a liar, "obsessed" with her image, in opening arguments of the defamation trial between the former spouses.
The case was brought after an article by Heard in which she claimed to be a victim of domestic abuse.

But Ms Heard's team argued Mr Depp brought her to court simply to "destroy her".

Ms Heard has in turn, sued him, with a $100m counterclaim.

Hordes of fans have already gathered outside the Virginia court for the trial, expected to last up to seven weeks.

At issue in the trial is Ms Heard's 2018 opinion piece in the Washington Post, describing herself as a "public figure representing domestic abuse". Mr Depp says the article - which does not mention him by name - is defamatory and derailed his career.

Beginning a day of opening arguments, Camille Vasquez, a lawyer for Mr Depp, told jurors Ms Heard had been the aggressor throughout the relationship.

Ms Heard concocted a role for herself as victim, Ms Vasquez said, once Mr Depp had asked her for a divorce in attempt to "avoid humiliation".

"She is obsessed with her public image," she said. "She has been living and breathing this role for years now and she is preparing to give the performance of her life."

Lawyers for Ms Heard instead claimed the actress had endured emotional, verbal and physical harassment at the hands of Mr Depp.

"Mom would, she would scream, she would yell. She would hit [Dad], call him names," Ms Dembrowski said. Mr Depp never fought back, she said.

Ms Dembrowski described her famous sibling as a gentle and loving brother, son and father to his two children.

According to Ms Dembrowski, her brother's demeanour changed when he became involved with Ms Heard. "He seemed sadder," she said.

"She [Ms Heard] said, 'Dior, why would Dior want to do business with you? You don't have style... She called him an old fat man," Ms Dembrowski said.

Mr Depp's sister told jurors she was "devastated" by the news that Mr Depp would marry Ms Heard, and fearful that her brother's relationship was mirroring that of their parents.

Ms Dembrowski is the first of an estimated 120 witnesses who will be called to testify in Virginia in the coming weeks, helping to sketch competing accounts of Mr Depp and Ms Heard's relationship.

On Sunday, ahead of the trial, Ms Heard released a statement to Instagram, writing that she has "always maintained a love for Johnny".

"It brings me great pain to have to live out the details of our past life together in front of the world," she said.

The words were delivered with a flourish, the beginning of a case about how Johnny Depp had been wounded, emotionally and materially by the words of Amber Heard. Benjamin Chew, leading Johnny Depp's legal team, laid out what we are about to witness, a case that will try to portray Amber Heard as a liar, a "troubled" and "manipulative" woman who was, they say, the real abuser.

The opening statement was delivered with all the slickness of a Hollywood movie, you almost felt there was going to be a round of applause at the end but, inside the court, all was calm.

Watching was a crowd made up largely of Depp fans. Before court proceedings began they were warned to keep phones hidden, not to take pictures, there would be no shouting of 'we love you, Johnny.' But as it began there was not a murmur or a sign of movement. Confidence was high that this would vindicate their idol.

This is going to be, they feel, the full story with evidence from forensic experts, a counsellor, the police and friends. Johnny Depp may have lost his case in London - this they feel will be different.

Amber Heard's legal team then presented the challenge. Yes, she had accused him of abuse but that was not what her article in the Washington Post was about. She did not name Johnny Depp, she did not write the headline and in America there is a special constitutional protection for words written in the newspapers.

Most lawyers would agree that bringing a successful libel action in America is much harder than in the UK and in the case in Britain, the judge came down firmly on the side of Amber Heard's version of events.

Today, however, was just an overture. Jurors were warned that what was to come would be graphic, neither side said they wanted to reveal the details of their turbulent private life and celebrity friends but that is now where we are.