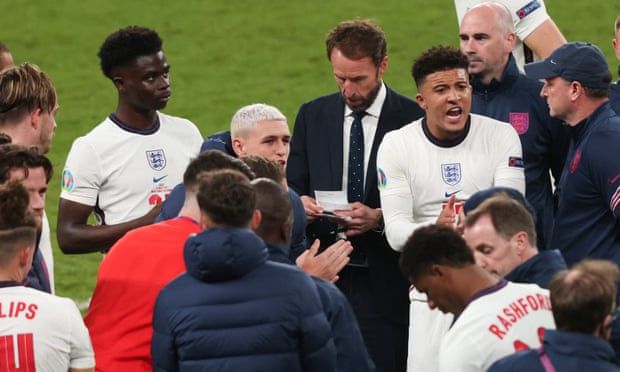 Boris Johnson and Priti Patel have been accused of hypocrisy over their stance on racism in football after they condemned the abuse of three black England players, having previously refused to criticise fans who booed the team for taking the knee.

Both the prime minister and home secretary said they were appalled by social media abuse of Marcus Rashford, Bukayo Saka and Jadon Sancho, who missed penalties in the Euro 2020 final at Wembley on Sunday night.

Responding to Patel’s statement on Twitter, the England player Tyrone Mings said: “You don’t get to stoke the fire at the beginning of the tournament by labelling our anti-racism message as ‘Gesture Politics’ & then pretend to be disgusted when the very thing we’re campaigning against, happens.”

Sayeeda Warsi, a Conservative peer and former co-chair, sent a public message to Patel, the home secretary, calling on her and all Conservatives to “think about our role in feeding this culture in our country”.

“If we ‘whistle’ & the ‘dog’ reacts, we can’t be shocked if it barks & bites,” Lady Warsi tweeted. “It’s time to stop the culture wars that are feeding division. Dog whistles win votes but destroy nations.”

She added: “As a proud centre-right politician, as a proud part of a diverse, vibrant nation that produced a football team that spoke to and represented England in all its modern diverse glory, it shames me that in 2021 some in politics are still playing fast & loose with issues of race.”

Sir Peter Fahy, the former chief constable of Greater Manchester and vice-chair of the body representing police chiefs, told the Guardian that some politicians had “wilfully” misinterpreted why the England players were making the protest gesture.

Fahy said: “You need to take a very clear stance on anti-racism. I do think you cannot be passively anti-racist. You have to resist it [anti-racism] being a political issue and be clear it is a moral issue. You have to make your position crystal clear.

“There is a connection. Politicians being ambivalent about their support, choosing to wilfully misinterpret what the England players are doing. That means that minority will see that as tacit support. They are giving them room to operate, especially those trying to make out that [taking the knee before games] is a political issue.”

Keir Starmer, the Labour leader, also criticised the prime minister, saying he had “failed the test of leadership, because whatever he says today about racism, he had a simple choice at the beginning of this tournament in relation to the booing of those who were taking the knee. The prime minister failed to call that out and the actions and inactions of leaders have consequences, so I’m afraid the prime minister’s words today ring hollow.”

Angela Rayner, Labour’s deputy leader, was even more explicitly critical, saying Johnson and Patel “gave licence to the racists who booed the England players and are now racially abusing England players”. She said they were “like arsonists complaining about a fire they poured petrol on – total hypocrites”.

The former England defender Gary Neville joined those questioning Johnson’s authority on the subject of racism, telling Sky News: “The prime minister said it was OK for the population of this country to boo those players who were trying to promote equality and defend against racism. It starts at the very top. I wasn’t surprised in the slightest that I woke up to those headlines; I expected it the minute the three players missed.”

Neville’s former Manchester United and England teammate Rio Ferdinand highlighted that the players who missed would have been idolised by those who abused them had the result gone the other way.

No 10 defended the prime minister against accusations of hypocrisy, his spokesperson saying he “utterly rejects that claim”. “[Johnson] was clear he wanted to see everyone getting behind the team to cheer them on and said racism in any form has no place in our society. He made it extremely clear … that he wanted to see the whole nation getting behind the team and not booing,” the spokesperson said.

Johnson tweeted: “This England team deserve to be lauded as heroes, not racially abused on social media. Those responsible for this appalling abuse should be ashamed of themselves.” He began his later coronavirus press briefing with a tribute to the England team, saying those directing racist abuse at them should “crawl back under the rock from which you emerged”.

Patel said she was “disgusted that England players who have given so much for our country this summer have been subject to vile racist abuse on social media.

“It has no place in our country and I back the police to hold those responsible accountable,” she wrote on Twitter. She later reiterated her condemnation of the racist abuse as she spoke in the House of Commons and said the government would do more to make tech companies stamp out online abuse on their platforms to make sure racists online “have no place to hide, and action is taken”.

As the players were subjected to a barrage of online abuse, one Tory MP had to apologise for suggesting Rashford should have concentrated on football rather than “playing politics” in an apparent reference to his campaign for free school meals.

Natalie Elphicke, the Tory MP for Dover and Deal, made the comment in a WhatsApp message to fellow MPs, suggesting Rashford should not have spent time on his successful campaign for free school meals for low-income pupils in the school holidays. 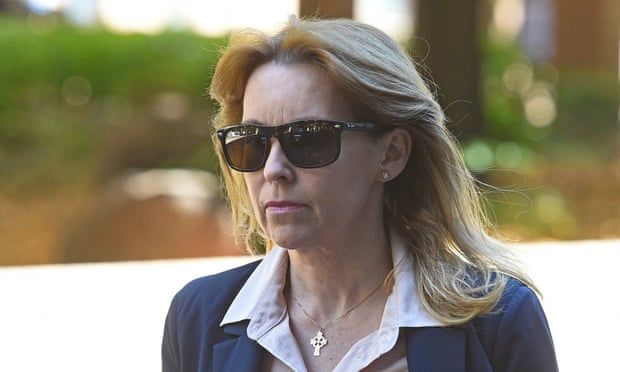 In comments first reported by GB News, Elphicke said: “They lost – would it be ungenerous to suggest Rashford should have spent more time perfecting his game and less time playing politics?”

Labour seized on the message, with Rayner saying Elphicke had been “sneering at an inspirational player who stepped up to feed hungry kids when [Tory MPs] voted to leave them without food”.

Elphicke released an apology shortly afterwards, saying: “I regret messaging privately a rash reaction about Marcus Rashford’s missed penalty and apologise to him for any suggestion that he is not fully focused on his football.”