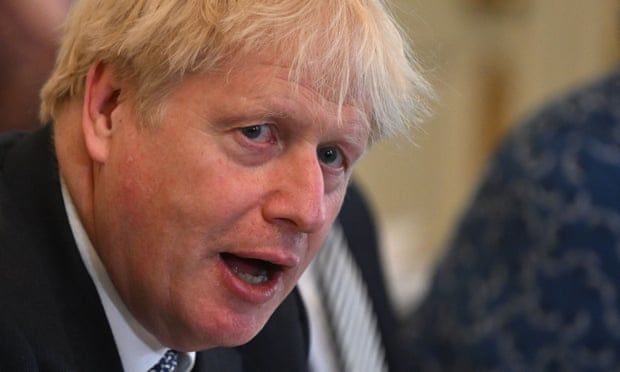 Johnson’s terrible legacy: the PM who held his party and his country hostage

The public, MPs and one-time allies in cabinet want him out. Johnson’s decision to face them all down is a landmark in our political history, says Guardian columnist Simon Jenkins
It was meant to be a mafia death, with no need for a 1922 Committee manoeuvre or an MPs’ vote.

When the men in grey suits left Downing Street on Tuesday night, they put on the table the requisite revolver and bottle of whisky. Boris Johnson apparently tossed them in the bin. Michael Gove, very much a cabinet big beast was one of those urging the PM to resign. On Wednesday night he was sacked. Johnson pretty much threw him in the bin too.

The Tory party remains an oligarchy. Over the course of the day an unprecedented 40 ministers and their aides quit Johnson’s side. They will prevail, but not just yet. Johnson won’t go without blood, sweat and tears.

If he tries to cling on into next week, it seems certain that the party’s 1922 Committee will meet, change its rules and vote no confidence in him. His vainglorious televised cabinet meetings will look horribly empty. He cannot possibly tell the Queen he commands a parliamentary majority.

At a certain point it is not integrity or even competence that is required of a political leader. The issue is simple dignity. The wilful self-delusion of Johnson through one Downing Street fiasco after another could possibly pass muster if it were thought to conceal a steely sense of purpose. But it won’t because it conceals nothing but a feckless ambition, still bolstered by the slavish support of a band of second-rate cronies. His time is up, but they won’t tell him and he cannot see it.

Johnson appears still to believe he can appeal to a popular electoral mandate over the heads of his parliamentary colleagues: a grim parody of the lingering campaign of his opposite number and erstwhile admirer, Donald Trump in America. But it won’t and can’t work. In Britain, layers of political membrane separate the office of prime minister from the electorate.

The issues that have brought Johnson down – Partygate, honours sleaze, the resignation of Lord Geidt, (his former ethics adviser), and of course the allegations levelled at his former deputy chief whip Christopher Pincher – may not be matters of life and war and death, but still they matter and their cumulative effect has drained him of authority among his colleagues, and the public.

A prime minister of ability and stature might have shrugged them off, but Johnson is not that prime minister: his apologies have been half-hearted, his remedies vacuous. He seemed genuinely not to care about openness or truthfulness or to understand what part they should play in the exercise of power.

His final remarks to parliament on Wednesday suggested a hope that people would not welcome a sudden upheaval in Downing Street at a time of stress in the nation’s affairs, and it is a measure of his collapse that his colleagues are now prepared to take that risk. They are allowed by the British constitution to do so.

Johnson has left his country in the most appalling mess, a mess clearly to be symbolised by the manner of his leaving.

He can retreat to a bunker, rage and even reshuffle, but the game is up. He won’t be allowed to hold his party, and his country hostage for long.
#Boris Johnson  #Donald Trump  #Johnson