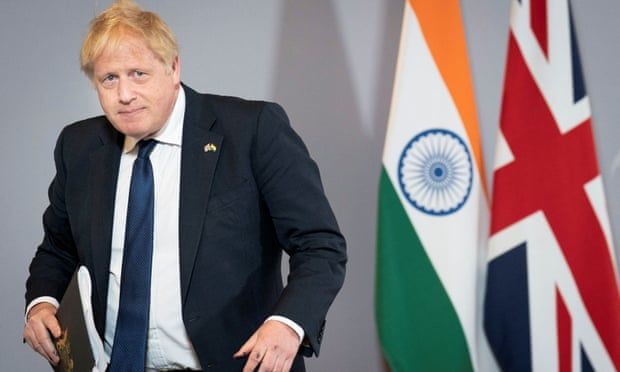 Speaking in Delhi at the end of a two-day visit, the UK prime minister warned that Vladimir Putin was resorting to a “grinding approach” in Ukraine; and suggested the UK would help to “backfill” countries including Poland if they provided heavy weaponry such as tanks to Kyiv.

Johnson was asked a report by the Royal United Services Institute (Rusi), warning that India was one of a number of major routes for smuggling arms to Vladimir Putin’s regime.

He pointed to the ban on exporting technology products to Russia, saying: “We want to ensure we keep that tight. We’ll be making sure that we don’t allow any loopholes of any kind … we will take steps to make sure that stuff doesn’t go through other routes to Russia.”

Hours before the Rusi analysis was published, the government announced it would ease arms exporting licensing arrangements with New Delhi by issuing an open general export licence to India, hailing closer defence cooperation as one of the wins from the prime minister’s two-day trip.

The report from Rusi, a 26-page overview of Russia’s military situation, says western economic sanctions mean Moscow will become increasingly reliant on component-smuggling to ensure its jets, missiles and other hi-tech munitions can function. Some components have a dual civilian and military use.

Its authors, Jack Watling and Nick Reynolds, warn that “Russia has established mechanisms for laundering these items through third countries”, and they argue that India should be subject to specific restrictions. “Restricting access, therefore, likely means preventing export to countries such as India of goods that are in some instances used for civilian purposes,” the two write.

They add: “Moreover, there are myriad companies based around the world, including in the Czech Republic, Serbia, Armenia, Kazakhstan, Turkey, India and China who will take considerable risks to meet Russia supply requirements.”

Labour’s shadow defence secretary, John Healey, accused Johnson of going on “a vanity trip”, and urged him to do more to press India to clamp down on exports that could be used in defence.

“Boris Johnson’s vanity trip to India was designed to distract from his law-breaking and failure to tackle the cost-of-living crisis. But he can use this report to help halt the Russian war in Ukraine. He must press for urgent action from prime minister Modi to clamp down on weapons parts passing through India and into Russian hands,” he said.

Asked about briefings from western intelligence figures suggesting the Ukraine conflict could go on for many more months, and may result in a Russian victory, Johnson said: “The sad thing is that that is a realistic possibility.

“Of course, Putin has a huge army. He has a very difficult political position because he’s made a catastrophic blunder, so that the only option he now has really is to try to use his appalling, grinding approach, led by artillery, trying to grind the Ukrainians down.”

Johnson said Putin was close to securing Mariupol – but he paid tribute to the resistance of Ukrainians: “No matter what military superiority Vladimir Putin may be able to bring to bear in the next few months – and I agree it could be a long period – he will not be able to conquer the spirit of the Ukrainian people.”

He announced that the UK would reopen its embassy in Kyiv next week, and suggested more ministers could follow his lead and visit the Ukrainian capital in the coming weeks.

And he suggested the UK could send weaponry to neighbouring countries who could provide Ukraine with arms. “We are looking at sending to tanks to Poland to try to help them as they send some of their T72s [tanks] to Ukraine,” he said.

An MOD spokesperson clarified the remarks on Friday evening, saying: “As announced by the prime minister, the UK is currently exploring sending British Challenger 2 tanks to Poland. While no decisions have been taken, these would be deployed on a short-term basis and operated by UK service personnel to bridge the gap between Poland donating tanks to Ukraine, and replacements arriving.”

Delivering a statement alongside Johnson on Friday, Modi called for an “immediate ceasefire” in Ukraine, and emphasised the importance of diplomacy, but did not criticise Russia, which is India’s biggest supplier of arms.

The Russian foreign minister, Sergei Lavrov, met Modi in Delhi this month, and insisted the two countries would continue to find ways to trade, despite western sanctions on Russia.
#Boris Johnson  #Johnson