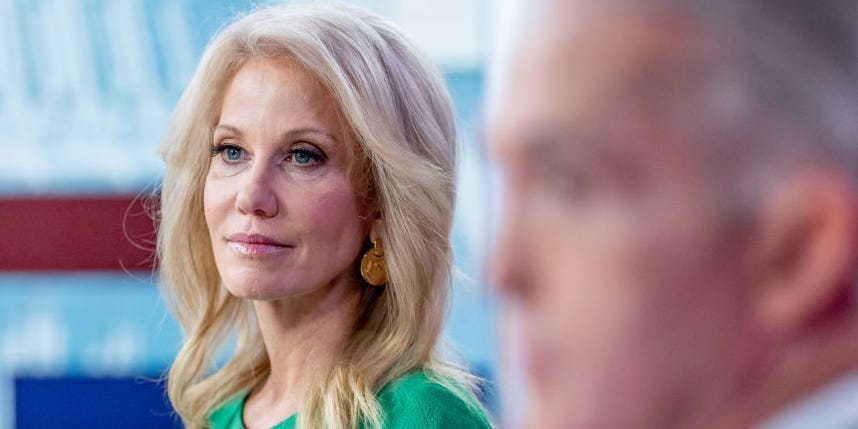 Kellyanne Conway slams GOP senators who didn't stump for Herschel Walker ahead of the Senate runoff: 'Why weren't you in Georgia?'

"Let me just say something respectfully to the 49 Republican senators: Where were most of you? Why weren't you in Georgia?" Conway asked on Fox News.
Former Trump White House senior counselor Kellyanne Conway blasted GOP senators for not doing more to support Herschel Walker, who lost a high-profile Senate runoff in Georgia to Democratic Sen. Raphael Warnock on Tuesday.

Conway, a veteran pollster who managed former President Donald Trump's successful 2016 White House campaign, lit into Republican lawmakers for what she said was their insufficient help toward a candidate who could have helped conservatives gain ground on Capitol Hill.

"People are saying, 'We need a new message.' Let me just say something respectfully to the 49 Republican senators: Where were most of you? Why weren't you in Georgia?" she asked during an appearance on Fox News.

"A few of them were, but they all should have been, because they should have been there in some form, town hall, in person," she said. "Where were the other senators to say, 'I want Herschel Walker, not Raphael Warnock in the Senate with me?'"

Throughout Walker's campaign, lawmakers including Sens. Lindsey Graham and Tim Scott of Scott Carolina, Rick Scott of Florida, Ted Cruz of Texas, Tom Cotton of Arkansas, and John Kennedy of Louisiana came to the Peach State to campaign alongside the former University of Georgia football star.

In last month's general election, Warnock edged out Walker 49.4%-48.5% statewide, which triggered a runoff as neither candidate hit the requisite 50% of the vote to declare victory.

While both candidates would go on to have an additional four weeks to campaign, the result was disconcerting to many Republicans, as the other statewide GOP candidates in Georgia were all victorious in their respective races — led by incumbent GOP Gov. Brian Kemp, who defeated superstar Democrat Stacey Abrams.

During the runoff period, Democrats emphasized early voting, allowing them to bank a huge number of votes headed into Election Day, similar to what the party stressed during last year's dual runoff elections.

Conway during her appearance said that Republicans needed to firmly understand the reality of early voting.

"We need to bank these votes early," she said. "We're taking a big chance somebody can get off work, out of the house, out of traffic, not feeling sick that day. If you can bank their votes in October, let's do it."