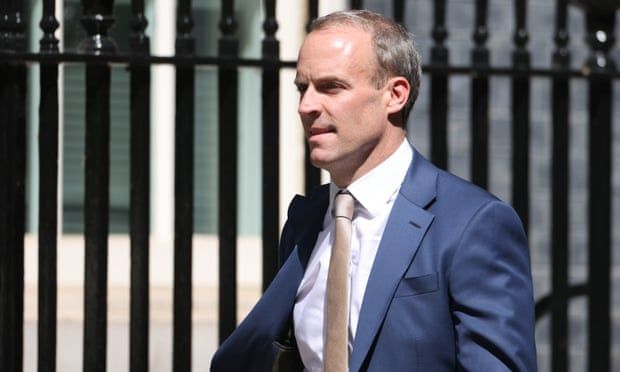 Dominic Raab is planning to curb judges’ powers in a move likely to make it harder to bring successful legal challenges against the government in England and Wales, according to a leaked document seen by the Guardian.

The Ministry of Justice (MoJ) paper suggests the justice secretary, who is also deputy prime minister, is considering changes that would have the effect of limiting ministers’ accountability in judicial reviews brought by claimants concerned about the way decisions have been taken by public bodies.

The move comes amid rhetoric by ministers about overreach by judges and “lefty lawyers”, with the recent judicial review case – still outstanding – challenging the Rwanda deportation flight having attracted the ire of government.

Despite the government having consulted on judicial review only last year and parliament then passing the Judicial Review and Courts Act, which came into effect on 15 July, the MoJ document says: “You (DPM [deputy prime minister]) have indicated that you are minded to consult on further reforms to judicial review”.

It then makes suggestions for change – “subject to your initial policy steers and the outcome of any consultation” – which several experts told the Guardian would have the effect of making it more difficult to bring a successful review.

Charlie Whelton, policy and campaigns officer at Liberty, said: “This leaked document suggests that the government plans to make it even harder for people to challenge them and make themselves even less accountable to the public.

“Over the past couple of years, we’ve seen an unprecedented assault on our legal rights, including in the Judicial Review and Courts Act and through ongoing proposals to scrap the Human Rights Act. The government is determined to make it as difficult as possible to take them to court and hold them accountable for unlawful actions.

“Whether by putting up more barriers to bringing cases, overturning judgments they don’t like or blocking off more and more actions from challenge, the government’s attempts to avoid accountability set a very dangerous precedent for all future governments of all stripes.”

The Judicial Review and Courts Act removed the right of parties to bring a review against decisions by tribunals in mainly immigration/asylum and social security cases. But many believe Raab’s predecessor, Robert Buckland QC, who instigated the bill, was sacked because it did not go far enough in curbing judicial scrutiny.

The MoJ document suggests Raab is determined to do so. One proposed change is “assessing the intensity of review to apply in different cases”, which could mean anything from dictating the criteria judges must apply to excluding them from hearing cases in certain areas of government decision-making.

It also refers to changing cost rules on “standing”, which requires the claimant to have “sufficient interest” to bring a case. By increasing the cost burden if parties are found not to have standing, the government could be seeking to discourage NGOs, which pursue cases with implications for many individuals beyond the claimant.

Finally, it suggests “addressing” named individual cases, including Privacy International, which determined that the secretive investigatory powers tribunal was subject to judicial review, and the Guardian’s successful attempt to get secret letters written by Prince Charles to government ministers published. In the latter case, the supreme court ruled that the attorney general could not block publication just because he disagreed with the upper tribunal’s decision to permit it.

While introducing legislation to parliament in response to a particular case is a government’s right, it has previously been suggested that it wants to allow ministers themselves to strike out findings from judicial reviews they disagree with.

Jolyon Maugham QC , the director of the Good Law Project, which has been involved in high-profile judicial reviews against the government relating to Brexit and the VIP lane for suppliers of Covid personal protective equipment, said: “We already have laws to prevent cases that lack merit. And the efficacy of judicial review as a tool for inhibiting the law-breaking of ministers is already under grave pressure.

“These measures are designed to repel the tiny rump of cases that can nevertheless succeed. What Raab seems to want is a world in which the government is above the law.”

The Guardian revealed in June that the number of high court judicial reviews (31) found for the claimant last year and the success rate (2.2% as a proportion of total cases lodged, or 30% of those that went to a final hearing) were the lowest since records began in 2001, prompting fears that government rhetoric was having a chilling effect on judges.

The MoJ said it does not comment on leaked documents.