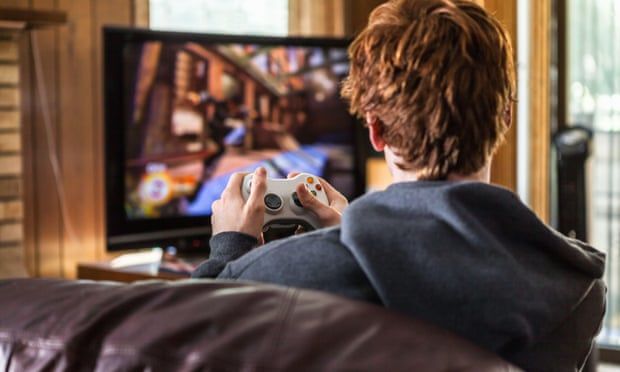 Gaming fans joined by million of newbies in 2020 resulting in £1.6bn more spent compared with 2019
The UK video games market hit a record £7bn last year as lockdown fuelled an unprecedented boom in the popularity of mobile games, consoles and virtual reality headsets.

The gaming industry has proved to be a coronavirus winner, with tens of millions of consumers looking for relief from indoor boredom. Gaming fans were joined by millions of newbies seeking out home entertainment, resulting in £1.6bn more being spent on games compared with 2019, an unprecedented 30% year-on-year increase.

“The figures confirm just how valuable games proved to people across the country during one of the toughest years of our lives,” said Dr Jo Twist, the chief executive of UK games industry body Ukie, which puts out the annual figures. “We all know how important entertainment, technology and creativity have been over the last year.”

The biggest year in UK gaming history was sparked by the serendipitous timing of the launch of Nintendo’s family-friendly phenomenon Animal Crossing: New Horizons on 20 March, as Boris Johnson informed the public that the nation was going into its first lockdown the following week.

The top seller during the first lockdown, outpacing hardcore gamer favourites such as Call of Duty, Animal Crossing helped fuel a 24% increase in digital game sales for consoles to £1.7bn last year. Total digital sales, including those for mobiles and PCs, climbed 21% to £3.9bn. Overall sales of games software, including “boxed” games, climbed to £4.55bn.

“During the initial Covid lockdown period, when many stores were closed and other entertainment sectors were affected, software sales for Nintendo Switch were up 215% year-on-year,” said Dorian Bloch, senior client director at GfK Entertainment.

Animal Crossing also underpinned a record 75% increase in spending on new consoles to £853m, as the public scrambled to get their hands on the latest home entertainment gaming systems. Last year, overall sales of Nintendo’s Switch outpaced those of the eagerly awaited new PlayStation and Xbox consoles, which hit the market in November.

In addition, the report said that the shift to home working fuelled a 70% increase in sales of PC games hardware to £823m, as consumers out of the eye of bosses sought to “purchase dedicated games computers to ensure home working set-ups could double as entertainment systems”. Total spend on all games hardware rose 61% to £2.26bn.

The lockdown also prompted consumers to experiment with newer technologies with sales of virtual reality hardware, such as headsets, climbing 29% to an all-time high of £129m.

However, it was not all good news for the video games sector as the coronavirus affected parts of the industry that rely on physical engagement.

Income from events plummeted 97% to just £249,000, and book and magazine revenue fell by more than a quarter to £10.5m. With cinemas shut for large parts of last year, revenue generated from game-related films and soundtracks fell by 22% to £23m.

The UK video games industry is the biggest in Europe, and the fifth biggest in the world, behind the gaming juggernauts Japan, South Korea, China and the US.
#Covid  #Coronavirus  #Boris Johnson