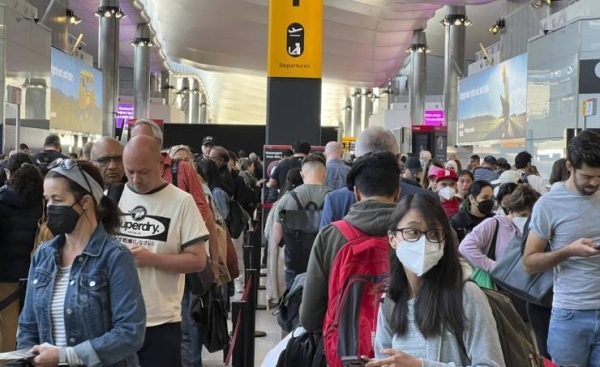 London’s Heathrow Airport apologized on Monday to passengers whose travels were disrupted by staff shortages and warned it may ask airlines to cut more flights from their summer schedules to reduce the strain if the chaos persists.
Heathrow, Britain’s busiest airport, said service levels have been unacceptable at times in recent weeks, with long lines for security, delays helping passengers with reduced mobility, and luggage going missing or arriving late.

“We want to apologize to any passengers who have been affected by this,” the airport said in a monthly traffic update.

Booming demand for summer travel after two years of COVID-19 travel restrictions have swamped airlines and airports in Europe, which have been left shorthanded after laying off many pilots, cabin crew, check-in staff, ground crew and baggage handlers.

At Heathrow, unclaimed luggage has piled up in arrivals because of a technical glitch in the baggage system.

Compounding the problem, Heathrow said the punctuality of arriving flights is “very low” because of delays at other airports and airspace congestion across Europe.

Heathrow said it started recruiting in November in anticipation of this summer’s recovery in travel demand and expects security staffing will be back to pre-pandemic levels by the end of July. It also has reopened Terminal 4 to give passengers more space.

UK airlines have been slashing their summer flight schedules after authorities ordered them to ensure they can operate without disruption over the summer. British Airways has cut 11% of its flights between April and October to avoid canceling flights on the day of departure.

Heathrow CEO John Holland-Kaye said the airport will review the airlines’ proposed cuts “and will ask them to take further action if necessary.”

Underlining Heathrow’s woes, the airport said in a separate statement that it ordered airlines operating in Terminals 3 and 5 to cancel 61 flights Monday because it was expecting more passengers there than it has capacity to serve.
#COVID-19  #Covid