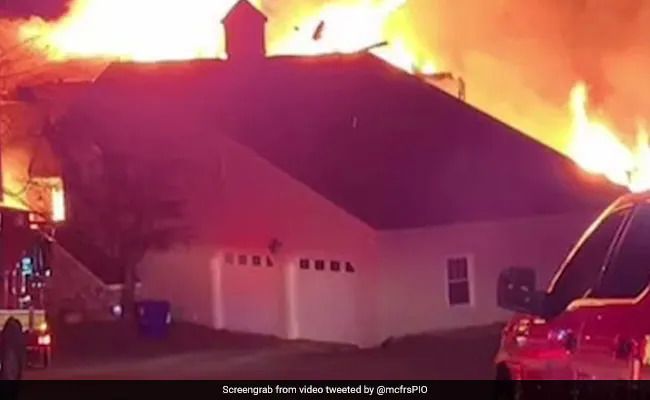 Man Burns Down $1.8 Million Home While Trying To Get Rid Of Snakes

The images showed the fire engulfing the property and also what was left of it when the fire was doused.

People can go to extreme lengths to protect themselves. At times, their efforts end up causing more damage. A similar thing happened to a man in the US state of Maryland. The person tried to smoke out a snake infestation in his home but ended up burning down the property spread over 10,000 square feet.

According to CNN, snakes had been a recurring issue for this owner and the previous tenant as well. So, the man decided to use coals as the heat source to create enough smoke to weed out the snakes. But he mistakenly placed the coals too close to combustible materials, eventually setting the house on fire.

Several images of the burnt house were shared on social media by Pete Piringer, chief spokesperson for the Montgomery County Fire and Rescue Service. The photos showed the fire dangerously engulfing the property and also what was left of it when the fire was doused. Thankfully, no human injuries were reported. But the status of snakes too remained undetermined.

While this has caused agony for the homeowner. Many people shared interesting and funny takes wondering why the homeowner did not try other, safer options.

A user said, “Any idea how old that house was? Ours is ancient and I usually have to capture and release snakes every year. I'm not sure I ever would have tried smoking them out.”

“I mean idk [I don't know], how about calling some kind of snake removal professional? She never thought about that?” said another.

This person represented the snakes and said that the homeowner should have left them alone.

However, one user joked about how he too would have burnt his house had it been infested by snakes.

“I'm with you there. If the snakes survived that. Just give them the deed,” wrote another.

The fire had started in the basement and quickly spread through the multi-storey home but luckily no one was there when it happened. ABC News reported that the damages will cost more than $1 million (Rs. 7.52 crores). The house was recently purchased for $1.8 million (Rs. 13.55 crores).