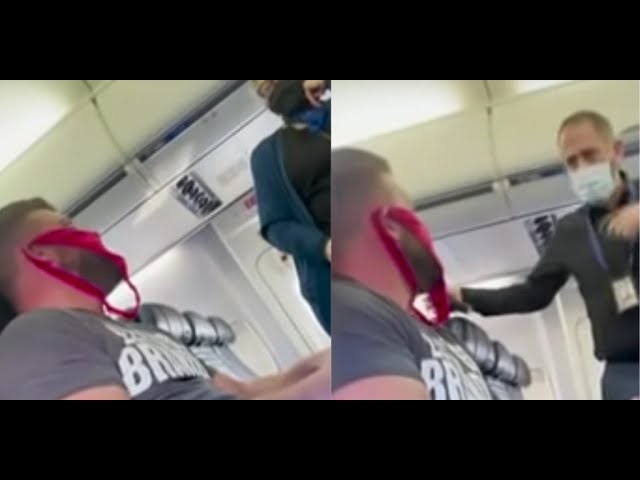 Adam Jenne told local news outlets that he wore the thong to challenge the federal mask mandate. In an interview with WBBH, Jenne compared himself to the civil-rights pioneer Rosa Parks.
A man was removed from a United Airlines flight after he used a red thong as a face mask.

Adam Jenne, 38, of Cape Coral, Florida, was asked to disembark from a flight set to take off from Fort Lauderdale-Hollywood International Airport after getting into a dispute with flight attendants, the Fox affiliate WSVN 7News Miami reported.

In a video circulating on Twitter, Jenne could be seen wearing the thong on his face. A staff member approached Jenne and asked him to disembark for noncompliance with the airline's mask requirements.

Jenne told WSVN 7News that he was wearing the underwear on his face instead of a mask to challenge the mask mandate on flights. There is a federal mask mandate in place that requires travelers in the US to wear a face mask on planes, trains, and buses, as well as in airports and other transit stations.

"Illustrating that absurdity by wearing women's underwear on my face sounds perfect," said Jenne, who wore an anti-President Joe Biden T-shirt on the flight that said "Let's Go Brandon."

In an interview with the NBC affiliate WBBH, Jenne compared his actions to that of the civil-rights pioneer Rosa Parks.

"Everything else that has sparked change in this country has started from everyday people. Rosa Parks wasn't famous. She changed the course of history," Jenne told the network.

Jenne also said he'd worn underwear on his face on more than one flight, though this could not be independently verified.

"Every single flight has been met with different reactions from the flight crew. Some with a wild appreciation, others confrontational," Jenne told WBBH. He added that he was allowed to fly most of the time, but on this occasion in Fort Lauderdale, he was asked to disembark by airport security.

Jenne told WSVN 7News that he later received an email from United Airlines that said he was barred from flying on the airline while the company reviewed his case.

In a statement to WBBH, United said it stood by the employees who made the call to remove Jenne from the aircraft.

"The customer clearly wasn't in compliance with the federal mask mandate, and we appreciate that our team addressed the issue on the ground prior to takeoff, avoiding any potential disruptions on the air," the statement said.
#Joe Biden