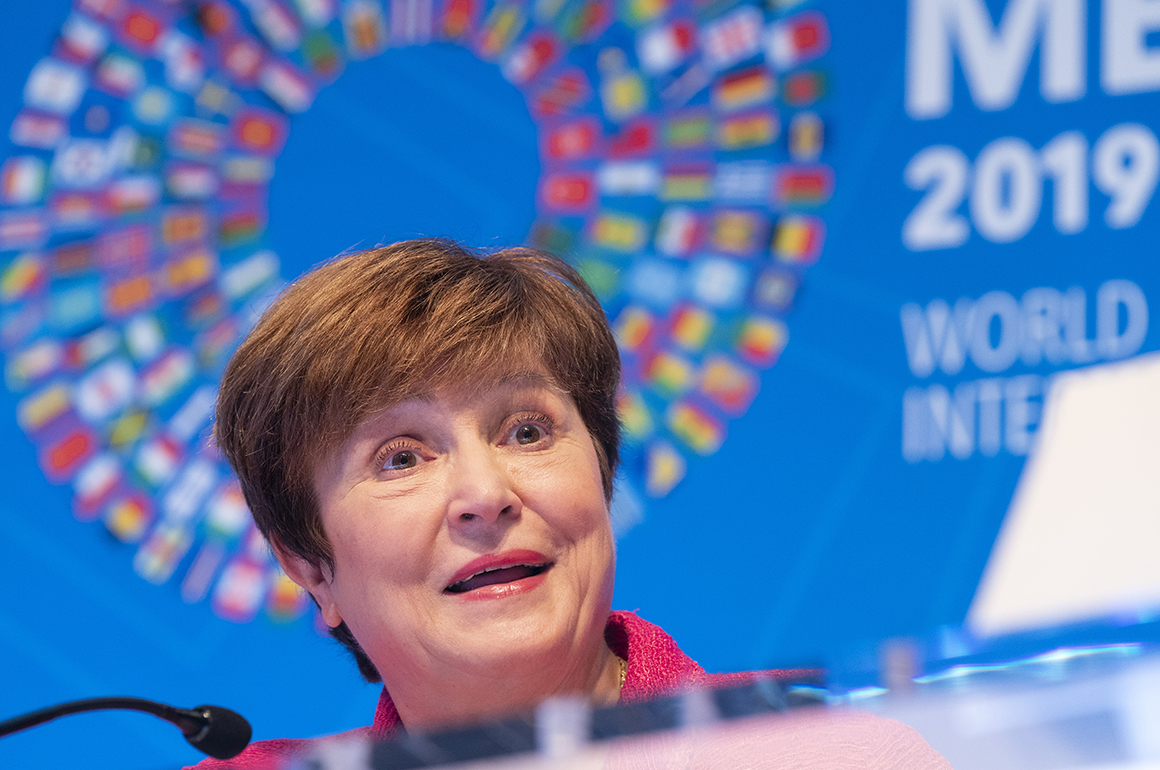 Meet the most powerful woman in Washington not named Nancy

Get used to pronouncing Kristalina Georgieva’s name (it’s Gor-ghee-ava). She’s the most powerful woman in Washington not named Nancy.
Her new job atop the International Monetary Fund - the 75-year-old institution that acts as the world’s economic safety net, dispensing billions to help failed economic states and guarding the global economy from meltdown - comes with particularly acute challenges.

As the world’s finance ministers - the IMF’s masters - gather in Washington this weekend for Georgieva’s first annual meeting, economic growth is slowing in 90 percent of the world and recession looms. Trade’s slowing, too, amid American and Chinese sniping and Brexit uncertainty.

The IMF’s members no longer agree on many things, from how to bolster growth to how to govern themselves. And Georgieva’s agenda is likely to push them out of their comfort zones further.

She wants to take the Fund away from its orthodox origins so it deals with “human security” (a favorite Georgieva phrase) and provides preventive economic care, rather than punitive economic cures.

In practice that means embracing gender equality, pushing green investments and aligning global institutions. Paschal Donohoe, Ireland’s finance minister, told POLITICO that Georgieva’s agenda is “very exciting and important” — strong words from a country that was still mired in an IMF bailout in 2017.

The approach is mostly an extension of her predecessor Christine Lagarde’s belief in broad-based economic growth — the pair even paraded for a girl power photo-op Friday to underscore the point.

While Georgieva wants to broaden the IMF’s agenda, she will actually have less room to maneuver than she did in her prior stint as World Bank CEO.

Georgieva will need to win over both the IMF executive board - a 24-strong body that is more active than the World Bank’s four fragmented boards - and the comfortable staff of the fund, who mostly enjoy tax-free salaries and comfortable working hours. Many staff would prefer the fund to stick to what they view as its core business of economic surveillance.

Where Georgieva arrives with an advantage over Lagarde is in being the first true insider at the Fund in decades. She is a hard-core Ph.D. economist with a 30-year track record working for global and regional institutions like the World Bank, United Nations and European Union.

What traditionalists dismiss as non-core business, Georgieva sees as an essential piece of a global puzzle.

For her, global institutions have to align both horizontally with each other, and vertically with the populations they support.

It’s one thing for the IMF to say it supports the United Nations Sustainable Development Goals. But shouldn’t the IMF, World Bank and the Organization for Economic Cooperation and Development have a joint strategy on inequality, or on other global topics like climate change?

“Alignment [between global institutions] came up during her candidacy,” said Samir Suleymanov, head of the World Bank’s Strategic Initiatives Unit, who has worked with Georgieva on and off for two decades. He says alignment work is already underway and that Georgieva “sees eye to eye with David Malpass [the Trump-nominated World Bank president] on many things. There’s now an expectation of increased alignment. If not joint action then coordinated thinking and approaches.” With Lagarde starting as head of the European Central Bank in December, the time appears ripe for this sort of coordination.

Georgieva, 66 years old, will also need to activate her personal relationships with leaders such as Vladimir Putin (Georgieva speaks Russian and once ran the World Bank’s Moscow office), Narendra Modi, Angela Merkel and Emmanuel Macron to increase the IMF’s impact.

Understanding Georgieva’s agenda, and the allies she will work with, means understanding France in particular. The French have held the IMF presidency for 49 of the past 56 years, regarding the post almost as their own.

Yet France went to the wall to install Georgieva as IMF president — the French finance minister Bruno Le Maire spent large chunks of July on the phone to fellow finance ministers making the case, even though it meant pushing the fund to waive its usual 65-year age limit for the post.

If there was no quid pro quo in the arrangement, that’s because it was unnecessary. The French government shares Georgieva’s holistic views on how to motor growth: by investing in women, the green economy and the digital revolution. And Georgieva has cultivated an alliance with France’s president, Macron, since 2015 when he was an upstart junior economy minister, and she was the European Commission vice president holding the bloc’s purse strings.

In other words, Georgieva and France will share an agenda into 2020 and beyond. But it will take more than France to keep Georgieva afloat.

With the Trump administration in a default skeptical mode about international institutions, Georgieva needs American allies. She has them in Ivanka Trump and Malpass, her Trump-appointed former boss at the World Bank, in addition to a string of relationships she developed with the George W. Bush and Obama administrations, most notably as a sidekick of Robert Zoellick, a former World Bank president.

Georgieva and the U.S. administration already see eye to eye on gender equality. Georgieva has promised to pursue it relentlessly in a move that dovetails with Ivanka Trump’s W-GDP and We-Fi economic empowerment programs. Ivanka Trump and Georgieva are known to have grown close over the past two years, with the White House signaling that it is keeping an open door for opportunities to collaborate with the IMF. (The U.S Treasury Department, which manages the U.S. relationship with the IMF, did not respond to a request for comment.)

The biggest point of tension with the United States could be climate policy. Georgieva used some of her first appearances at this week’s IMF meetings to announce that climate risk would soon be integrated into IMF economic surveillance and recommendations. The IMF not only supports carbon taxes, this month it suggested a rate of $75 a ton in 2030, while admitting it means “household electric bills would go up by 43 percent cumulatively over the next decade.”

Georgieva’s past playbook shows she will frame climate problems almost purely in economic terms, where the cause of climate change matters less than the response. Georgieva’s World Bank team pointed to a doubling of its climate action investments - to $200 billion between 2021-2025 - that occurred during the Trump administration and under Georgieva’s leadership.

Keeping China in the IMF tent could be Georgieva’s hardest task of all. Miffed by long-standing resistance among advanced economies to giving emerging economies even more power in the IMF’s complicated voting structure, China has aggressively worked around the IMF to create its own series of infrastructure and investment banks over the past five years: the Asian Infrastructure Investment Bank, the Silk Road Infrastructure Fund, a $240 billion crisis fund called the Chiang Mai Initiative and a $100 billion liquidity arrangement with Brazil, Russia and South Africa.

Georgieva can at least point to more direct experience than anyone in dealing with cranky shareholders in multilateral institutions. Georgieva was deeply involved in the World Bank’s last two multibillion dollar capital increases, and in increasing the share of votes held by “developing and transition” economies in the bank. As the EU’s chief operating officer Georgieva managed its budget and HR system, two of the biggest sources of tension between the bloc’s civil service, member countries and voting population.

The World Bank’s Suleymanov said that while “of course she has her own views,” Georgieva’s greatest strength is “a special ability to find credible common ground. She does it without turning the common ground into the lowest denominator.”

What Georgieva doesn’t have a talent for is suffering fools and those who try to break and bend the rules.

The Bulgarian’s kind smile and positive and soft-speaking manner disguises an iron will.

When the EU’s chief diplomat Catherine Ashton in 2011 wanted to fold Georgieva’s EU humanitarian mission into her own diplomatic service, Georgieva unexpectedly went public, announcing the change would happen “over my dead body.” Georgieva won.

When she became fed up with the Machiavellian tactics of Martin Selmayr, then chief of staff to European Commission President Jean-Claude Juncker, a man she described as “poisonous” to POLITICO, Georgieva arranged for the World Bank to create a new CEO post, then upped and left.

In this, her last big institutional role, Georgieva won’t be leaving in a hurry.

But after a decade as the bridesmaid of global politics, finding herself always the vice president, No. 2, or the person who just missed out on a top job, Georgieva’s got nothing to lose by running the IMF with her elbows out.
#Angela Merkel