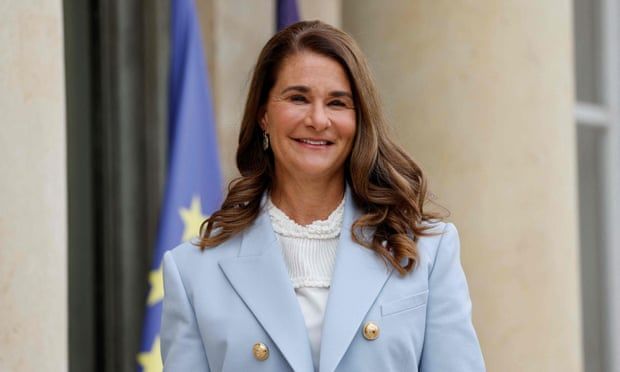 Billionaire says she gave ‘every single piece of myself’ to 27-year marriage to Microsoft co-founder and says many factors led to divorce
Melinda French Gates has addressed her divorce from Bill Gates publicly, saying that although she and the Microsoft co-founder are “friendly at this point”, she is not ready to label her relationship with Gates as “friends”.

In a recent interview with CBS’s Gayle King, French Gates said multiple factors resulted in the couple’s high-profile divorce last May after 27 years of marriage.

“It wasn’t one moment or one specific thing that happened. There just came a point in time where there was enough there that I realized it just wasn’t healthy. I couldn’t trust what we had,” the billionaire philanthropist said.

French Gates revealed that she cried numerous times during her marriage, sometimes while lying on the floor. “How can I get up? How am I going to move?” she would ask herself, she said.

“I gave every single piece of myself to this marriage. I was committed to this marriage on the day we got engaged and until the day I got out of it … but I also think society used to put things on women like it was our fault,” she said. “I did nothing wrong so I hold my head high.”

In 2021, Gates acknowledged that he had an affair with a Microsoft employee, which Microsoft asked its board to investigate shortly before his resignation from the board in 2020.

“There was an affair almost 20 years ago which ended amicably,” said Gates’s spokesperson Bridgitt Arnold.

Speaking about the affair, French Gates said she “certainly believe[s] in forgiveness, and so I thought we had worked through some of that”.

When asked about one report that claimed Gates had multiple affairs, French Gates said: “You know, I think those are questions Bill needs to answer.”

She added that she met Epstein once, because “I wanted to see who this man was and I regretted it from the second I stepped in the door”.

“He was abhorrent, evil personified. I had nightmares about it afterwards,” French Gates said.

Pressed about Gates’s continued meetings with Epstein despite her disapproval, she said: “Any of the questions remaining about Bill’s relationship … those are for Bill to answer.”

French Gates said she will keep working with her former husband at the Bill and Melinda Gates Foundation, which they co-founded more than 20 years ago.

“We certainly have a working relationship and I would say we’re friendly at this point,” she said.

French Gates said: “Friends is a different word for me … that might come over time but for me there’s still healing that needs to happen.”

She said that she is open to falling in love and dating again. “I hope that happens for me again. I’m dipping my toe in that water a little bit,” she said.

Last month, French Gates announced she would no longer be channeling the majority of her wealth through the Gates Foundation, one of the world’s largest philanthropic organizations.

“I think philanthropy is most effective when it prioritizes flexibility over ideology – and why in my work at the foundation and Pivotal Ventures I’ll continue to seek out new partners, ideas and perspectives,” French Gates wrote, referring to her investment and incubation company that she founded in 2015.
#Melinda Gates  #Bill Gates