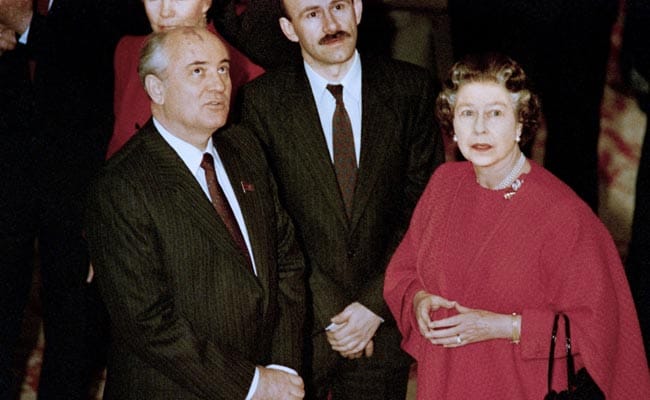 Queen Elizabeth II Death: The queen was the first British monarch in history to visit Russia, when she was hosted by president Boris Yeltsin in 1994.

From a string of US presidents to Lady Gaga, Queen Elizabeth II met leading political and artistic personalities from around the globe during her record-breaking time on the throne.

Some were despised dictators, others world-famous guitarists she made polite conversation with. Regardless of the personalities, she always kept her composure.

Here are some of her famous meetings:

After her accession in 1952, the queen met all sitting US presidents with the exception of Lyndon B Johnson. That spans 14 heads of state, from Dwight D Eisenhower to Joe Biden.

During the Cold War, however, her meetings with leaders from the Soviet bloc were few and far between.

But it would be more than three decades later, in 1989, that Mikhail Gorbachev would be invited for an audience. It came after he launched a policy of "perestroika" (restructuring) which led to the collapse of the Soviet Union.

The queen was the first British monarch in history to visit Russia, when she was hosted by president Boris Yeltsin in 1994.

Russian President Vladimir Putin met the queen during a state visit to Britain in 2003.

She had a particularly warm relationship with South Africa's anti-apartheid hero Nelson Mandela, one of the few who called her by her first name.

But the head of state also received the leaders of some of the world's most repressive regimes.

They included Zaire's Mobutu Sese Seko, who paid a state visit to Britain in 1973 and Zimbabwean president Robert Mugabe in 1994.

Romania's dictator Nicolae Ceausescu was invited by the government -- and to the queen's reported displeasure -- in 1978.

She is said to have hidden in a bush in the grounds of Buckingham Palace while walking her corgis to avoid talking to him.

On June 27, 2012 the British monarch exchanged a historic handshake in Belfast with Martin McGuinness, a former Irish Republican Army paramilitary commander who had become number two in the Sinn Fein party, which does not recognise her sovereignty over Northern Ireland.

It was a gesture that would have been unimaginable just a few years earlier amid the bitterness of the deadly conflict in Northern Ireland.

The IRA had assassinated her relative, Lord Louis Mountbatten, in 1979.

"Hello, are you well?" McGuinness -- by then deputy first minister in the power-sharing government in Belfast -- asked the monarch.

"Thank you very much. I am still alive anyway," she responded.

The photograph of their handshake, which came 14 years after the Good Friday peace accords that largely ended the three decades of conflict, was beamed around the world as a historic moment of reconciliation.

In her autobiography, British crime writer Agatha Christie wrote that buying a car and dining with the queen at Buckingham Palace had been the two most exciting moments of her life.

She remembered "her kindness and easiness in talking" and described her as "so small, and slender, in her simple dark red velvet gown with one beautiful jewel".

Spice up your life

From Michael Jackson, when he was still an adolescent, to Lady Gaga and Madonna, she also encountered some of the world's biggest pop stars, sometimes giving rise to amusing scenes.

In 1997, with perfectly coiffed hair and white gloves, she was photographed shaking hands with the Spice Girls, wearing thigh-high split gowns and showing off plunging necklines.

In 2005, at a pop star bash at Buckingham Palace, the queen asked guitarist Eric Clapton, "Have you been playing a long time?".

In 2012 she took part in a spoof video with James Bond star Daniel Craig in which she appeared to parachute into the opening ceremony of the London Olympics.

She met her fictional double, actress Helen Mirren, on several occasions. Mirren won an Oscar for having played the title role in "The Queen" in 2006.

The real monarch made Mirren a dame in 2003.