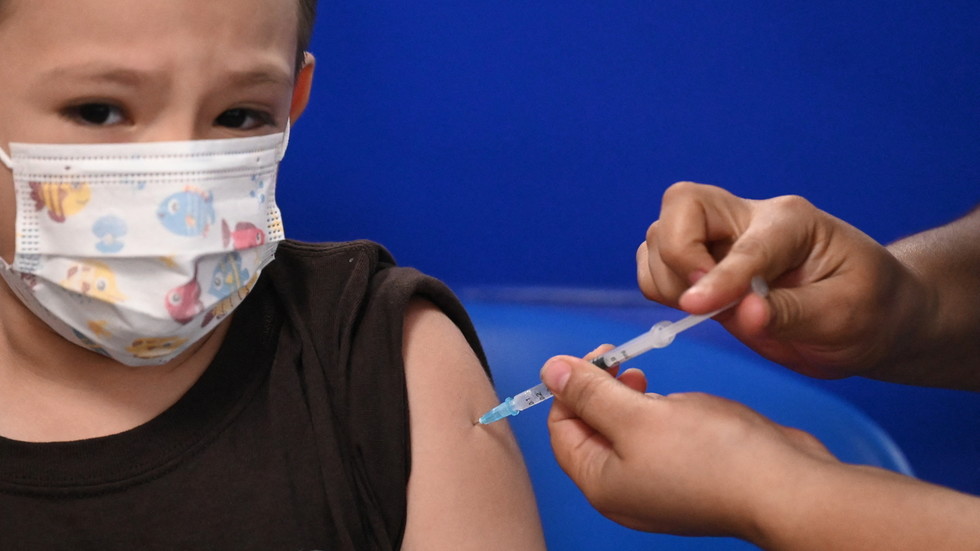 Moderna Inc has claimed that its mRNA Covid vaccine is “well tolerated” in children between the ages of six to 11, and announced that the firm plans to submit the data from its study to regulatory bodies worldwide shortly.
In a statement released on Monday, the company said its interim data from Phase 2/3 of the KidCOVE study showed the vaccine produced a “robust neutralizing antibody response.”

Healthy children between the ages of six and 11 participating in the study were given two doses, half the size of what adults receive, 28 days apart. According to the notice, the jab “was generally well tolerated with a safety and tolerability profile generally consistent with the Phase 3 COVE study in adolescents and adults.”

The majority of adverse events were mild or moderate, Moderna said, with the most common side effects documented including fatigue, headache, fever, and injection site pain.

Stephane Bancel, Chief Executive Officer of Moderna, said the company looks “forward to filing with regulators globally and [remains] committed to doing our part to help end the COVID-19 pandemic with a vaccine for adults and children of all ages.”

While recruitment is complete for the six to under 12 years cohort, which saw 4,753 subjects in this age group take part, the study “continues to enroll children [aged] six months to under six years of age.”

The publication of the firm’s findings comes shortly after a handful of Nordic nations decided to suspend their usage of the vaccine to some extent earlier this month, citing concerns over heart inflammation in young adults.

Iceland’s health authorities fully halted the use of Moderna’s Covid vaccine for all ages, while Sweden put a pause on the company’s jab, marketed as Spikevax, for all young people under 30. Finland took a similar approach, but ruled this vaccine out for young male Finns only, and Norway recommended that men under 30 opt for Pfizer instead.
#COVID-19  #vaccine  #Pfizer  #Covid