Elon Musk is expected to become Twitter's temporary CEO after closing his $44 billion takeover of the social-media firm, a person familiar with the matter said on Thursday, as the billionaire inches closer to securing funds for the deal.

Musk, the world's richest man, is also the CEO at Tesla Inc (TSLA.O) and heads two other ventures, The Boring Company and SpaceX.

Tesla shares dropped over 8% on Thursday, as investors fretted that Musk's involvement with Twitter could distract him from running the world's most valuable electric-car maker.

Twitter shares, on the other hand, extended gains and were up about 4% at $50.89, closer to the deal price of $54.20, as investors bet that the new funding made the completion of the deal more likely.

Parag Agrawal, who was named Twitter's CEO in November, is expected to remain in his role until the sale of the company to Musk is completed. CNBC first reported on Thursday that Musk plans to become CEO of Twitter on an interim basis.

Earlier on Thursday, Musk listed a group of high-profile investors who are ready to provide funding of $7.14 billion for his Twitter bid, including Oracle's co-founder Larry Ellison and Sequoia Capital. 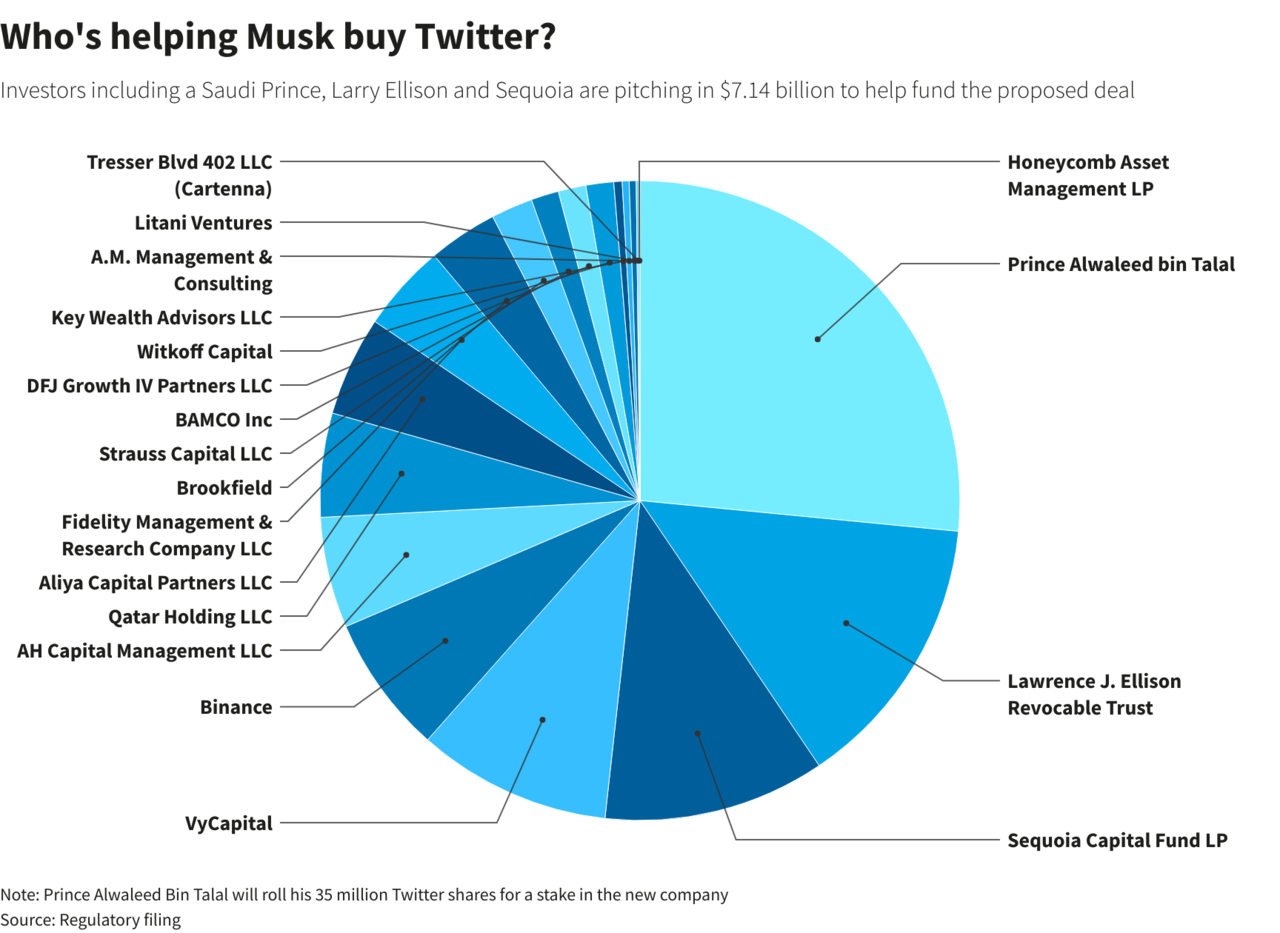 Saudi Arabian investor Prince Alwaleed bin Talal, who had said last month that the deal price was not sufficient for him to sell his shares, said Musk would be an "excellent leader" for Twitter and agreed to roll his $1.89 billion stake into the deal.

"Great to connect with you my "new" friend @elonmusk ... Kingdom Holding Company and I look forward to roll our ~$1.9 bn in the "new" Twitter," Alwaleed said in a tweet.

Musk increased the financing commitment to $27.25 billion, which includes commitments from 19 investors, while reducing a margin loan from Morgan Stanley to $6.25 billion. He has already secured commitments for $13 billion in loans. 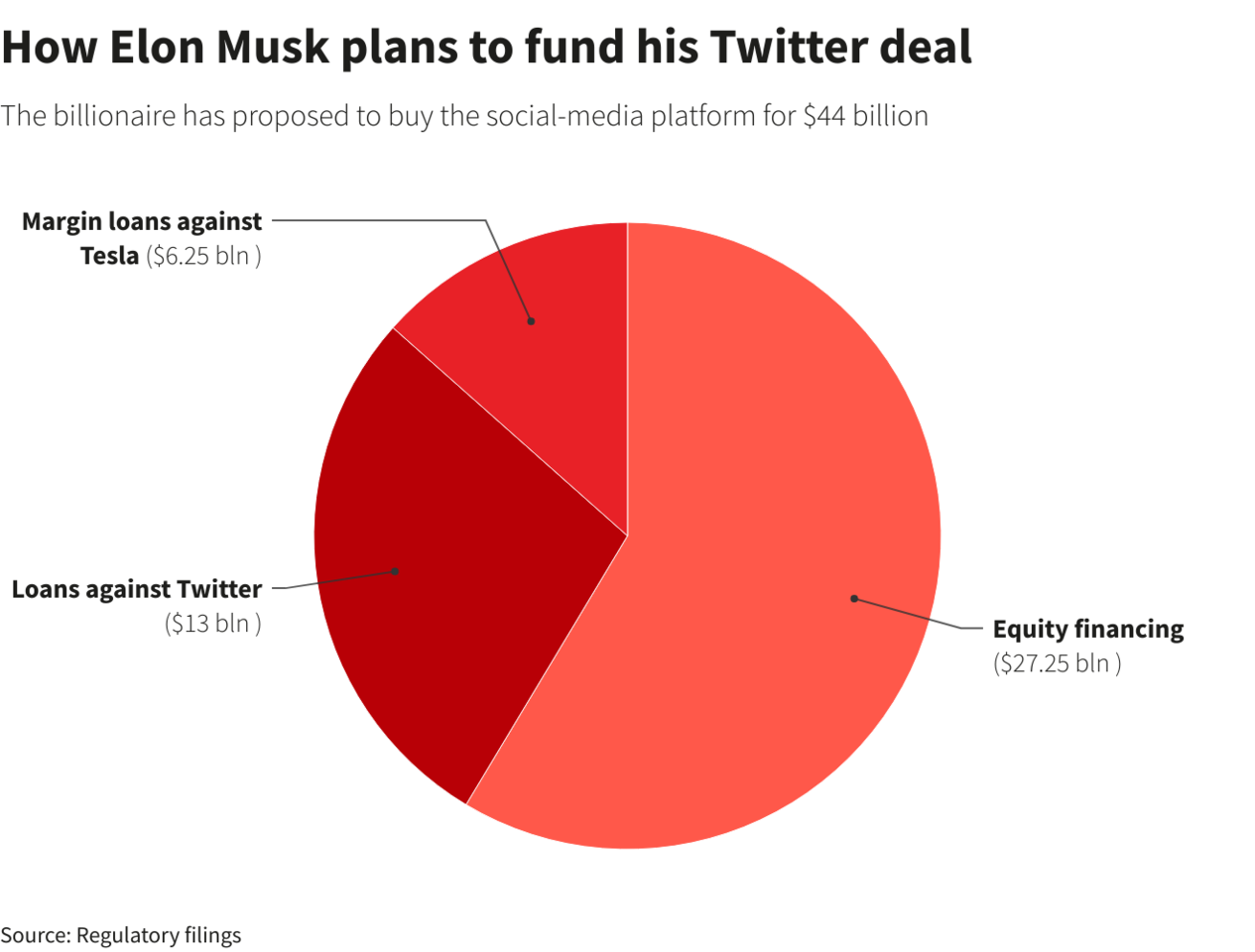 "We hope to be able to play a role in bringing social media and web3 together and broadening the use and adoption of crypto and blockchain technology," Binance CEO Changpeng Zhao said.

Reuters reported on Monday that Musk was in talks with large investment firms and high-net-worth individuals about taking on more financing for his Twitter acquisition and tying up less of his wealth in the deal.

Musk will continue to hold talks with existing shareholders of Twitter, including the company's former chief Jack Dorsey, to contribute shares to the proposed acquisition, according to a regulatory filing.

Larry Ellison, a board member at Tesla and a self-described close friend of Musk, has committed $1 billion for the funding.

Musk, a self-proclaimed free speech absolutist who has advocated user-friendly tweaks to Twitter, such as an edit button and defeating "spam bots" that send overwhelming amounts of unwanted tweets, has previously said he would try to keep as many investors in Twitter as possible.

Investors have been fretting over whether Musk will complete the Twitter deal.

In April, he decided at the last minute not to take up a seat on Twitter's board. In 2018, Musk tweeted that there was "funding secured" for a $72 billion deal to take Tesla private but did not move ahead with an offer.

Musk would have to pay a $1 billion termination fee to Twitter if he walked away, and the social media company could also sue him to complete the deal.