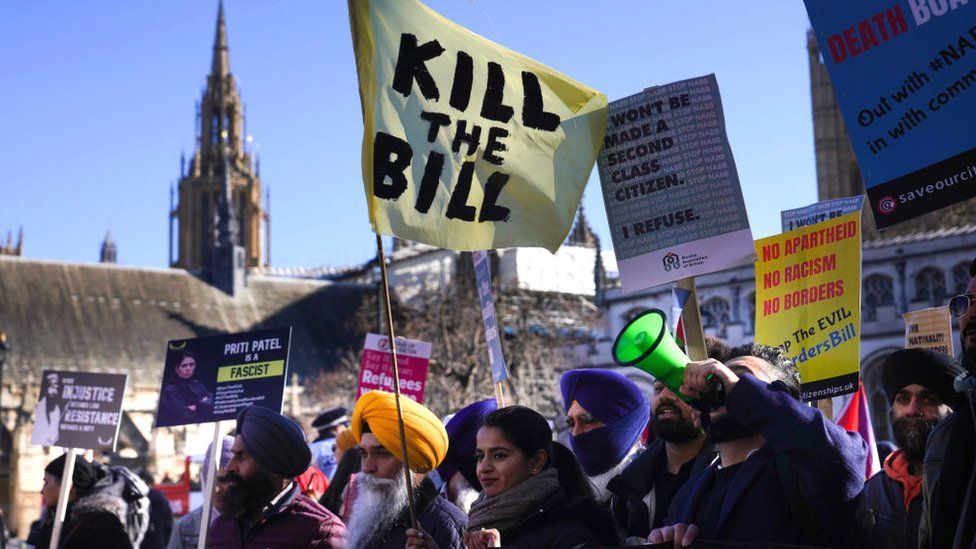 Nationality and Borders Bill: Can you lose your citizenship?

The government will have the right to strip a person of their British citizenship without telling them, under new powers being voted on by MPs.

The plan - which is part of the controversial Nationality and Borders Bill - is expected to pass into law soon.

Citizenship is a legal status. If someone is a UK citizen they have the legal right to live in the country, as well as access to services such as welfare, education and healthcare. They can also vote.

Citizenship is also an identity, and often forms part of a person's sense of self and belonging.

Some people who are not citizens have the right to live in the UK permanently with the same rights - they are said to have settled status, or fixed leave to remain.

Under the new law, the Home Office would be given the power to remove someone's UK citizenship without having to tell them.

The government says it would only use this in "exceptional" circumstances, such as if someone was in a war zone, or in hiding and impossible to contact.

But campaigners say that the move would chip away at citizenship protections, and is likely to disproportionately target ethnic minorities.

What is the current law?

At the moment, the home secretary can strip someone of their citizenship for the following reasons:


*  The person obtained citizenship through fraud

The Home Office needs to notify the person, who in turn has the right to appeal - although this can be a lengthy process.

The Home Office also needs to believe that the person is eligible to apply for citizenship in another country. The UK has responsibilities under international law to avoid leaving people stateless.

How many people have been stripped of their citizenship?

However the Home Office says between 2010 and 2018, an average of 19 people per year were stripped of their citizenship where it was "conducive to the public good", and an average of 17 people a year because of fraud.

The immigration law website Free Movement says their research reveals that more than 460 people had their citizenship removed between 2006 and 2020 - 175 for national security reasons, and 289 for fraud.

Who are those people?

The most high-profile recent case of someone having their citizenship removed was Shamima Begum, one of three east London schoolgirls who travelled to Syria in 2015 to support the Islamic State group (IS).

Ms Begum was born in the UK to parents of Bangladeshi heritage and was 15 when she left.

In February 2020, a tribunal ruled that removing Ms Begum's citizenship was lawful because she was "a citizen of Bangladesh by descent", so removing her British nationality wouldn't make her stateless. Bangladesh said that was not the case and she would not be allowed into the country.

In February 2021, the Supreme Court decided that she wouldn't be allowed back into the UK to appeal against the decision.

Another person who had his citizenship deprived for national security reasons was Tauqir Sharif, an aid worker from Walthamstow. He moved to Syria in 2012 with his wife, and was stripped of his citizenship in 2017.

The Home Office said it believed Mr Sharif had links to a group aligned with al-Qaeda. He denied the claim, and called the system "unfair" and "racist".

What about other countries?

US-born citizens can't have their citizenship revoked because citizenship is a birth right guaranteed in the US constitution.

However, naturalised US citizens - that is, people who have immigrated to the US - can have their nationality stripped for a few reasons, including for being members of a proscribed group and for obtaining their US citizenship through fraud.

In Australia, a person can have their citizenship removed on national security grounds, if they are a dual citizen of another nation.

Citizenship can be removed for treason, disloyalty and other national security reasons in 14 EU states, including Greece, France and Romania.

In recent years, the UK has stripped more people of their citizenship than any other country apart from Bahrain, according to a report released by the Institute on Statelessness and Inclusion.