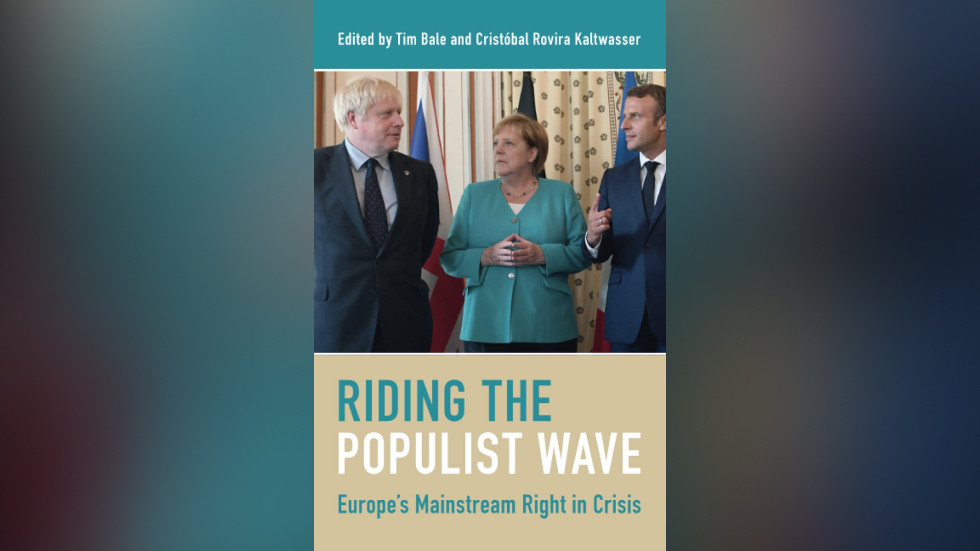 New book explains why the mainstream right is doomed

‘Riding the Populist Wave’ shows how the far right is dictating the counter-argument to progressives in areas such as immigration and EU integration – with the result that the mainstream right is now facing an existential crisis.
The European Union’s former Brexit negotiator, Michel Barnier, is a big beast in politics, but his withdrawal last week from the race to represent Les Républicains (LR) in next year’s French presidential battle is tacit acknowledgement of a new reality: the mainstream right across Europe is in a death spiral.

Changing an LR candidate is as futile as rearranging the deckchairs on the Titanic. With President Emmanuel Macron occupying the centre-liberal position with La République En Marche! and Marine Le Pen with the Rassemblement National on the far right, the mainstream right has struggled for some time to find policies, votes and power. Barnier clearly decided it was better to cut and run than go down the gurgler with this whole sorry mess.

The mainstream right – including conservative, Christian democrat and liberal parties – is facing an existential crisis, explored with fascinating insight in the recently published ‘Riding the Populist Wave: Europe’s Mainstream Right in Crisis’, edited by Tim Bale and Christobal Rovira Kaltwasser.

Running the rule over eight European nations – Austria, France, Germany, Italy, the Netherlands, Spain, Sweden and the UK – the team of authors all reach the same conclusion. And that is the far right is dragging the mainstream into assuming much tougher positions in four key areas: immigration, EU integration, moral issues and welfare. Maybe for good.

If further proof were needed of the mainstream right’s demise, look to Germany, where, after spending 57 of the last 72 years in power, the Christian Democratic Union/Christian Social Union government has capitulated to a coalition of progressives featuring formerly unlikely bedfellows in the form of the Social Democrats, Greens and business-friendly Free Democrats.

How, after 16 years of Angela Merkel, could the right lose its grip on power to such a hotch-potch alliance of progressives?

The answer lies in revolution. The ‘silent revolution’ and ‘silent counter-revolution’ are ideas that first took hold in the early 1990s. The silent revolution describes the situation in Western democracies where affluence has reached such a point that society looks for post-material concerns to occupy itself in the political arena. These are the matters that now occupy the minds of the left and of progressives, not workers’ rights or the ills of capitalism. And the silent counter-revolution is the response to that, which has emerged not from the mainstream right – it finds itself conflicted over such things – but from the new populist radical right (PRR).

The problem that the mainstream right has in addressing these issues is that it risks alienating its core voters by taking a tougher line. For instance, with its support for business, the mainstream right needs immigration to help grow the economy. Affluent, middle-class mainstream voters want immigration because it provides cheap plumbers and nannies for their children. The concerns of the PRR – that cheap labour causes wage compression and drives down salaries – fly in the face of those, so they’ve been left alone by the mainstream right, and their support has haemorrhaged as a result.

Or consider Austria, where the currently beleaguered Austrian Peoples’ Party – nominally a Christian Democrat party – shifted hard to the right under Sebastian Kurz in a bid to nudge the far-right Freedom Party of Austria off the ball. In the Netherlands, the liberals of the People’s Party for Freedom and Democracy have made the same move in a bid to nullify the gains made by Geert Wilders’ Party for Freedom and Therry Baudet’s Forum for Democracy.

Even in Sweden, where liberal values have been trumpeted for longer than most can remember, the far-right Swedish Democrats have put immigration and cultural integration high up on the political agenda, no longer to be brushed aside by moderate conservatives seeking to exclude them from the top table for daring to suggest the country has a migrant problem.

In European democracies, where alliances and coalition are the currency of government, any electoral gains, no matter how small, can be leveraged into power and this has meant that political positions once considered beyond the pale – outside the ‘cordon sanitaire’ – are no longer so.

In the UK, meanwhile, the liberal conservatism espoused by former PM David Cameron is rarely discussed by a Boris Johnson government that has adopted hardline positions on those very subjects so central to the ‘silent counter-revolution’ – immigration, EU integration, moral issues and welfare.

In ‘Riding the Populist Wave’, Richard Hayton, the author of the UK viewpoint, suggests that this “neo-conservative cultural mood” was actually a Thatcherite by-product, although traditional conservatives were too engaged in infighting over issues such as the EU and same-sex marriage to track the shift in public feeling. That left the field open to parties such as the UK Independence Party and then the Brexit Party, and we all know what happened there.

Events in Germany and France this year show that this drift to the far right and the ‘silent counter-revolution’ are not going away. Despite the fact that almost 50% of those questioned in a 2019 Bertelsmann Foundation survey for the European Parliament found the far right an unpalatable idea, its ranks and reach continue to grow.

This gives Bale and Kaltwasser some cause for concern, and they reach the conclusion that, “If mainstream-right and far-right parties become increasingly similar and eager to join forces, we may very well see the formation of a strong right-wing bloc bent on bold reform that could shift the post-war West European consensus on what democracy actually means.”

That’s a stark warning about an increasing polarisation in European politics, but, as the pair declare, “a necessary one all the same”.
#Boris Johnson  #Angela Merkel  #Johnson