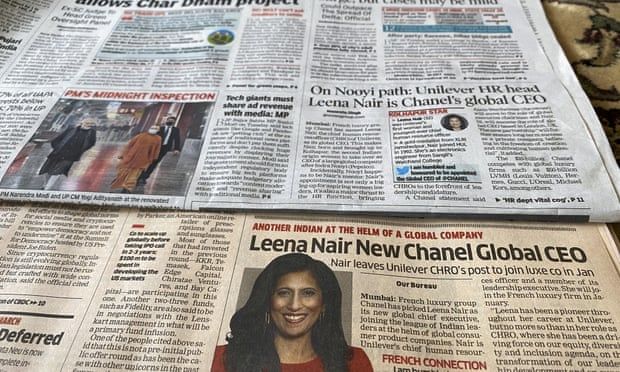 The announcement of Chanel’s new chief executive this week marks a departure for the French luxury brand, one that is being praised as a landmark for diversity within the industry.

Leena Nair makes moves from being the global head of human resources at the Anglo-Dutch consumer goods company Unilever, where she had worked for 30 years, to taking the reins at the 112-year-old fashion house founded by Coco Chanel.

When Nair joins Chanel at the start of January she will replace Alain Wertheimer who will become global chair of the French fashion house.

Nair and Wertheimer “will further ensure Chanel’s long-term success as a private company”, the brand said. Nair said she was “humbled and honoured” to be appointed chief executive of the “iconic and admired company”.

The Indian-born executive was Unilever’s first Asian, first female and youngest ever chief HR officer, a role under which she was responsible for about 150,000 people across more than 100 countries and led the Diversity and Inclusion (D&I) agenda for its workforce.

The optics behind her hiring echo sentiments made by Fiona Pargeter, Chanel’s head of D&I, in a powerful speech. “The intention is to diversify,” Pargeter said in 2019, as reported by Women’s Wear Daily.

“The intention is to take a more democratic approach to France itself,” she said. “We do know that there has been tension with our African brothers and sisters here in this country, our Arabic brothers or sisters in this country. Chanel understands that.”

Andrew Groves, a professor of fashion design at the University of Westminster, said: “Given Leena Nair’s track record, I’m hopeful that Chanel is entering a period of profound change.

“If Chanel, a privately owned company in a conglomerate world, is starting to alter its worldview, then there is a chance that we are witnessing a fundamental shift within the fashion industry.”

The fashion industry has been contemplating its structural biases since spring 2020 and the murder of George Floyd and the Black Lives Matter movement. Nair’s appointment marks the clearest indication so far that racial disparity within the industry is being taken as seriously as economic concerns.

In June, the fashion label reported that their revenue had grown by double digits in the first six months of this year. Despite this, the brand have struggled to capture the hearts and minds of the fashionistas since the death of Karl Lagerfeld in 2019.

He had been the brand’s creative director since 1981, and his successor Virginie Viard, who had worked closely with the enigmatic designer, has not had the same impact, with influential fashion website Diet Prada complaining one collection “simply lacked excitement”.

The brand was recently faced a backlash online for the contents of their Christmas advent calendar, which were mocked by some influencers.

“After 37 years of Karl Lagerfeld, Chanel had become a fossilised relic, still adhering to a Eurocentric, colonialist approach to fashion,” Groves said. “His death appears to have liberated the company, and this appointment indicates that they are looking beyond fashion, beyond Paris, and beyond being gatekeepers to become a more inclusive company.”