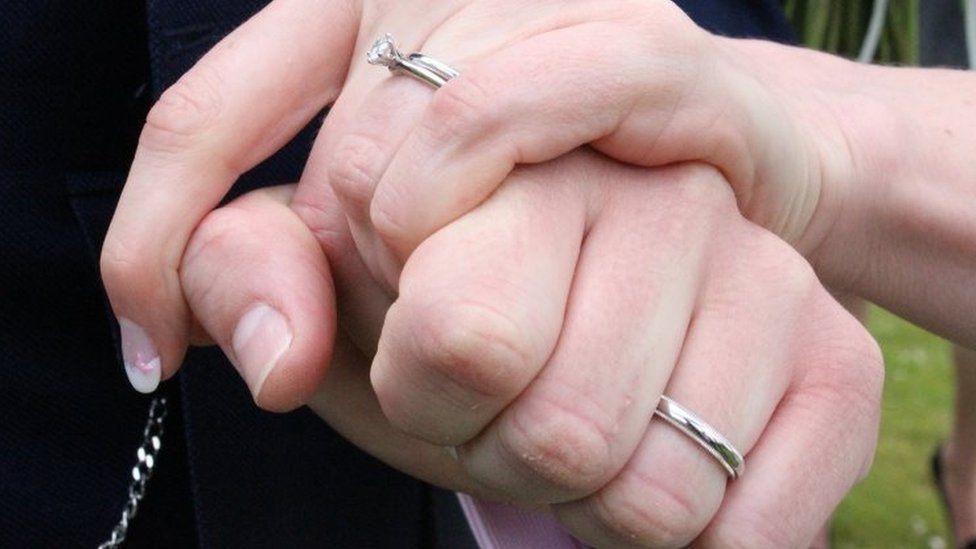 The legal age of marriage and civil partnerships has been raised to 18 in England and Wales.

Previously, people could get married at 16 or 17 as long as they had parental consent.

The new law also applies to cultural or religious marriages that are not registered with the local council.

Conservative MP Pauline Latham, who introduced the bill to Parliament, said it would "transform the life chances of many girls".

Under the new rules, children will not face penalties but adults who facilitate their marriage could face up to seven years in jail and a fine.

This would include adults who took children abroad to carry out the marriage.

Backed by the government, the bill has sailed through Parliament with very little opposition - and will receive Royal Assent later this week, meaning it will become law.

Payzee Malika, who was coerced into a marriage, said: "Today, tears of joy roll down my face because I know what this means for girls like me."

While Payzee escaped her marriage, her sister Banaz was murdered in a so-called honour killing.

"There has not been a single moment in this journey when Banaz was not at the forefront of my thoughts," she tweeted.

"Every day I thought of her. I fought for her. This law could have saved her."

Mihai Calin Bica, of the Roma Support Group, said the bill was "a good initiative to protect our youth", but the group expressed concern "about how it will be applied in practice".

It noted that in Roma communities the word "married" was often used to explain boyfriend-girlfriend relationships their children have.

They warned this could create complications when enforcing the law and urged the government to run an educational campaign aimed at raising awareness of the new rules.

The new law will not affect the validity of any marriages or civil partnerships that happened before the legislation comes into force.

The bill might have sped through Parliament without much opposition, but it has taken years for campaigners to get to this stage.

The hope is this new law will empower young people who are at risk, and the threat of prison will act as a deterrent for those trying to arrange any marriage for under-18s.

But it will take time for that information to trickle through to the communities it will most effect.

That's a worry for those who represent the Roma community who want an educational campaign to raise awareness of the new rules.

But those who have broken free from their child marriages have told me they think this law will make all the difference for children who most need it.

Forced marriage: 'I should've been protected'