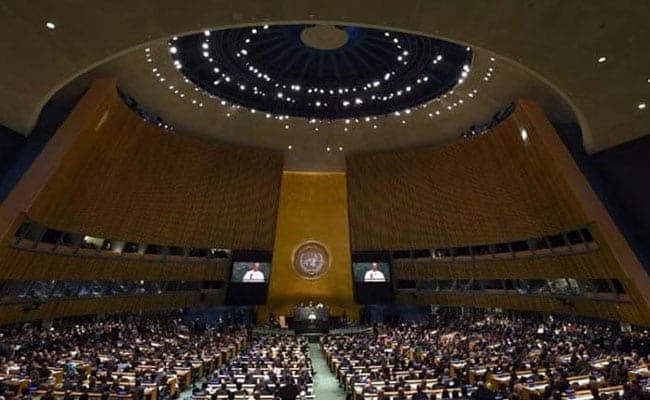 UN General Assembly Abdulla Shahid, while talking to the UN reporters was asked if delegations coming for the UNGA have informed him if they are unvaccinated due to no access to vaccines in their countries.
As world leaders arrive to attend the annual UN General Assembly session next week amid the coronavirus pandemic, New York City will have in place facilities that will offer COVID-19 vaccination and testing to all those attending the high-level meetings.

President of the 76th session of the UN General Assembly Abdulla Shahid, in his remarks to the opening of the 76th UNGA session Tuesday, said that with a view to recovering from COVID19, vaccinating the world is his top focus and he will be holding a high-level thematic debate on vaccine equity with leading experts and world leaders.

"As you are all aware, our host country has made vaccines universally available to the whole United Nations family, including staff and delegates. I am glad to announce that the city of New York will also be offering vaccination and testing resources for all the attendees of the High-Level Week" he said, urging UN envoys and delegates to be an "example" to the world and "do our part in following local requirements."

Mr Shahid, while talking to the UN reporters was asked if delegations coming for the UNGA have informed him if they are unvaccinated due to no access to vaccines in their countries.

"I have no answer to that question. That has not been shared with me how many are coming without vaccines but the host country has informed me that they will have the facilities to vaccinate all who are attending the General Assembly if they so desire. It will be facilitated."

Over 100 Heads of State and Government and many more foreign ministers and delegates will arrive in New York City next week to attend the annual high-level General Assembly session, which had gone virtual in 2020 due to the COVID19 pandemic.

Prime Minister Narendra Modi and US President Joe Biden are among the world leaders who will address the UN General Debate in person next week. However, concerns have been raised over the UNGA high-level week becoming a "super-spreader event" as delegations come from various parts of the world amid a still raging pandemic and low vaccination rates in many nations.

Last month, the US, host country of the UN headquarters, had urged heads of government and state and ministers to deliver their statements to the UN General Debate by video instead of travelling to New York to ensure that high-level week doesn't not become a "super-spreader event."

US Ambassador to the UN Linda Thomas-Greenfield had written a letter to the 193 Member States of the UN that as the Host Country of the UN Headquarters, her country bears a "significant responsibility" to ensure the safety of participants and New York residents.

"So too does the Secretariat and President of the General Assembly. We need your help to prevent UNGA 76 High-Level Week from being a super-spreader event," she had written in the letter.

UN Secretary-General Antonio Guterres had said in a press conference last week that the "the City of New York has offered to all delegates coming to the General Assembly the possibility to be vaccinated and we will have here a... I mean, a system to do it.

He said the City of New York was cooperating with the UN in a very effective way and thanked the authorities for it.

During the General Debate, only four delegates from a country, including the head of state or government, will be present in the General Assembly Hall.
#Coronavirus  #Joe Biden  #Vaccines  #COVID-19  #vaccine  #Covid