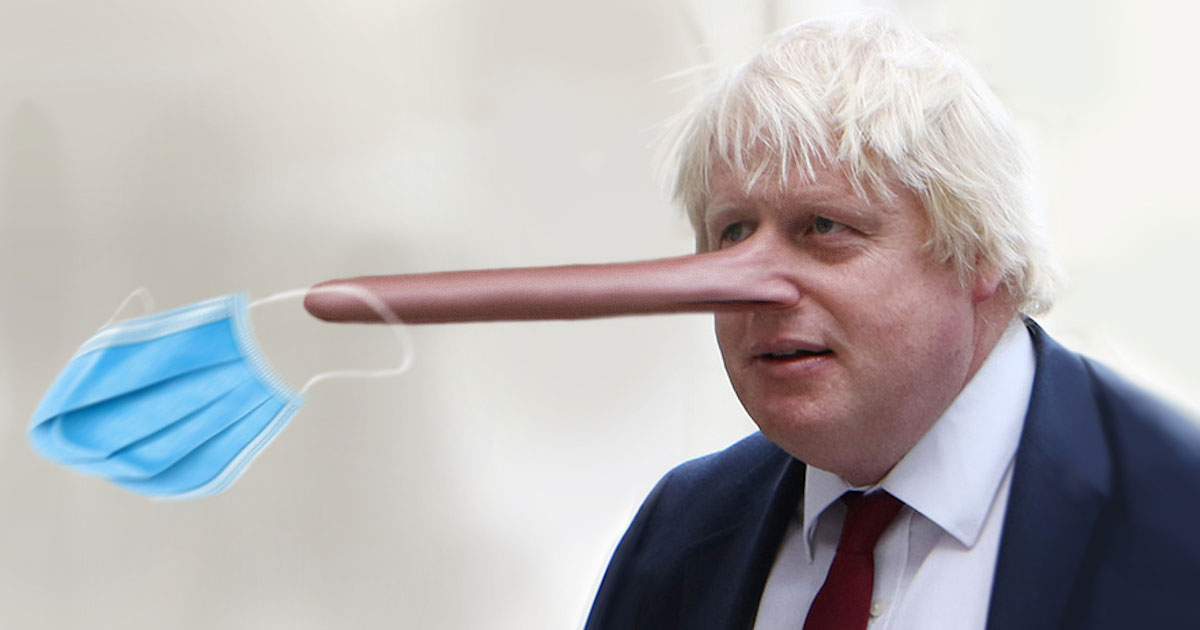 Nobody warned me drinks event was against rules - Boris Johnson

What this moron crook is talking about? Why should anybody warn him that what he is doing is against the rules that he, himself, and his corrupted government set??? Dominic Cummings - who claims PM lied about lockdown parties - is set to speak to Sue Gray's inquiry.

"Nobody warned me that it was against the rules," the prime minister said, adding: "I would have remembered that."
Former aide Dominic Cummings says he warned Mr Johnson at the time, and has accused him of misleading MPs about it.

Asked if he would resign if he was found to have misled MPs, Mr Johnson said: "Let's see what the report says."

Senior civil servant Sue Gray is due to publish a report into alleged Covid rule-breaking at lockdown get-togethers in Downing Street and government departments.

Ms Gray's team has approached Mr Cummings as part of their inquiry, the BBC has been told. He has said he is willing to answer any questions they may have.

Six MPs have publicly revealed they have submitted letters of no confidence in Mr Johnson, and the BBC has been told a seventh, Bury South MP Christian Wakeford, has also written to Sir Graham Brady, chairman of the 1922 committee.

The BBC's Laura Kuenssberg says a group of about 20 Conservative MPs who were first elected in 2019 have also been meeting to discuss submitting letters to Sir Graham.

If 54 MPs send letters to Sir Graham expressing no confidence in the prime minister, it will trigger a leadership contest.
One MP trying to remove the prime minister told the BBC they thought the threshold could be reached saying: "I think we've done it, difficult to tell though."

Our political editor said it was not clear how many of the 2019 intake MPs talking about submitting letters on Wednesday, would go ahead and do it.
A senior MP told the BBC it could be "a matter of hours" before things move.

But a cabinet member denied there was a big threat to the prime minister, telling the BBC: "It will be bumpy, but we'll get through."

They dubbed the meeting of 2019 MPs the "pork pie plot", because one of the attendees was Alicia Kearns, who represents Rutland and Melton (home of Melton Mowbray pies).

However, colleagues of Ms Kearns say she is not leading a rebellion.

It comes as Mr Johnson made a public apology to the Queen over No 10 parties on the eve of the Duke of Edinburgh's funeral in April last year.

Appearing to be distressed as he was quizzed about the parties, he said: "I deeply and bitterly regret that that happened.

"I can only renew my apologies both to Her Majesty and to the country for misjudgements that were made, and for which I take full responsibility."

On Friday, Downing Street apologised to Buckingham Palace over the two staff parties - which were not attended by Mr Johnson - on 16 April, 2021.

The following day, the Queen sat alone - socially distanced from her family - as she mourned her husband.

In his blog, Dominic Cummings, who was still working in Downing Street at the time of the drinks party on 20 May 2020, claimed the PM had waved aside his warnings.

Mr Cummings said the idea that a senior aide - the PM's Principal Private Secretary Martin Reynolds - would not have checked with Mr Johnson, after he was warned his invitation to drinks in the Number 10 garden broke the rules, "is not credible".

Two other former Downing Street officials told the BBC they remembered Mr Cummings telling them on that day he had advised the prime minister not to allow the drinks to go ahead.

Asked about Mr Cummings' claims on a visit to a North London hospital, Mr Johnson said: "I can tell you categorically that nobody said that this was something that was against the rules, that was in breach of the Covid rules."

You might call it the "nobody told me" defence.
But will a mixture of pleading ignorance and showing contrition be enough for the prime minister?

He was, of course, the person in charge, who decided how we all had to limit our behaviour during the pandemic, so this line of defence opens him up to new attacks.

Did he understand the rules? Should he have needed someone to point out a breach?

Even if he thought this was a work event, is that enough? - because work events were also prohibited in May 2020.

Sue Gray's inquiry may well find there's no incontrovertible evidence he was, explicitly, told the drinks event in his garden was a breach of the rules.

But what will voters think?
That will shape what Tory MPs think of their leader. It's a delicate position for a prime minister with already slipping poll ratings.

In his interview, Mr Johnson repeated the apology he made to MPs last week for "mistakes" made over the May 2020 get-together.
"As I said in the House of Commons, when I went out into that garden I thought that I was attending a work event."

He said he had not seen the email sent by Mr Reynolds inviting staff to "socially distanced drinks in the No 10 garden".
"I only saw it the other day. I only saw it when it emerged," said the PM.

"What I remember is going out into that garden for a short time and for 25 minutes thanking staff who'd worked on Covid, who were continuing to work on Covid, and then going back to the office.

"If I had my time again, I would not have allowed things to develop in that way."

Asked if he had lied to Parliament over the parties, he said: "No. I want to begin by repeating my apologies to everybody for the misjudgements that I've made, that we may have made in No 10 and beyond, whether in Downing Street or throughout the pandemic."

"He's the prime minister, he set the rules, he didn't need anyone to tell him that the party he attended broke them.
"If he had any respect for the British public, he would do the decent thing and resign."

Lib Dem leader Sir Ed Davey said the prime minister was "just making it worse for himself" with his "empty excuses" and "transparent lies".

The SNP's deputy Westminster leader Kirsten Oswald said it was "clear the prime minister was not being frank" about events in the Downing Street garden.

Cabinet minister have rallied round the prime minister, with Chancellor Rishi Sunak saying "of course" he believed Mr Johnson's version of events.

Deputy PM Dominic Raab said prime ministers would normally be expected to resign if they had been found to have misled MPs, but he believed Mr Johnson would remain in power for "many years".