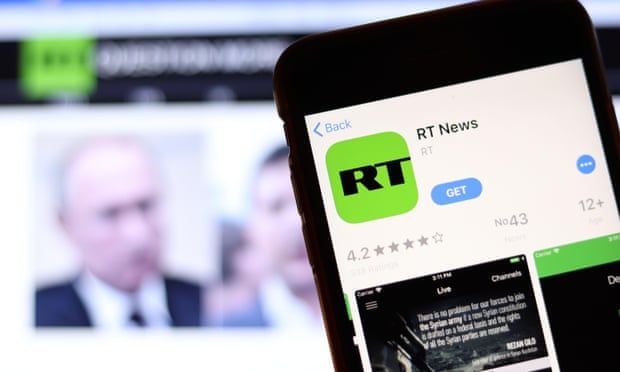 Kremlin-backed English-language TV station could close if found in breach of impartiality standards
Kremlin-backed television station RT could lose its licence to broadcast in the UK after media regulator Ofcom launched 15 separate investigations into its news coverage of the war in Ukraine.

The English-language channel, once known as Russia Today and fronted by several British presenters and journalists, has repeatedly echoed President Putin’s narrative of the invasion. It has consistently referred to the invasion as a “special military operation” and focused on how Russia is supposedly protecting breakaway regions from Ukrainian aggression.

The unprecedented scale of the investigation into RT, which relates to 15 editions of the channel’s hourly news headlines programme broadcast on Sunday, suggests Ofcom has grounds to believe RT has consistently failed to meet this standard in relation to coverage of the war in Ukraine.

Ofcom chief executive Dame Melanie Dawes said the investigations would be concluded urgently: “When reporting on an armed conflict, we recognise it can be difficult for broadcasters to verify information and events, but it is imperative that they make every effort to do so. They must also explain clearly to audiences where there is uncertainty or where events are disputed.”

The decision follows the EU’s move to block Russian-backed media channels – including RT – over the weekend, although details of how that will be enforced remain unclear. The BBC fears its own operations and broadcasts in Russia could be severely restricted if Ofcom chooses to remove RT’s licence in the UK.

Although Ofcom is operationally independent from the government, its leadership is appointed by ministers and it has come under substantial political pressure from both the Conservatives and Labour to investigate RT.

On Sunday, prime minister Boris Johnson strongly criticised the channel: “The stuff that RT is peddling at the moment is doing a lot of damage to the truth, and I think it’s important that Ofcom should look at it and make up its mind about whether that organisation is infringing the rules of this country”.

He said that while he might like to order it to be banned, “the difference between us and Russia is that the power is not with me, and that’s the right thing.”

Ofcom very rarely removes licences from television broadcasters. When RT was found to have made multiple breaches of the broadcasting code over its coverage of the Salisbury poisoning and the Syrian war, it was fined £200,000 – although it has yet to pay up.

RT’s online operation, which enjoys a substantial reach, would not be affected by any Ofcom ban. Only the television channel – which broadcasts on Freeview but has had historically low ratings – could be forced off air by the media regulator.

On Friday, Ofcom executive Kevin Bakhurst told the Guardian that his regulator needed to respect free speech and would take into the account the potential impact on British outlets of any ban.

He said: “We’d be mad not to think of the wider implications, not just for BBC journalists based in Russia but for Ukraine.”
#Boris Johnson  #Johnson