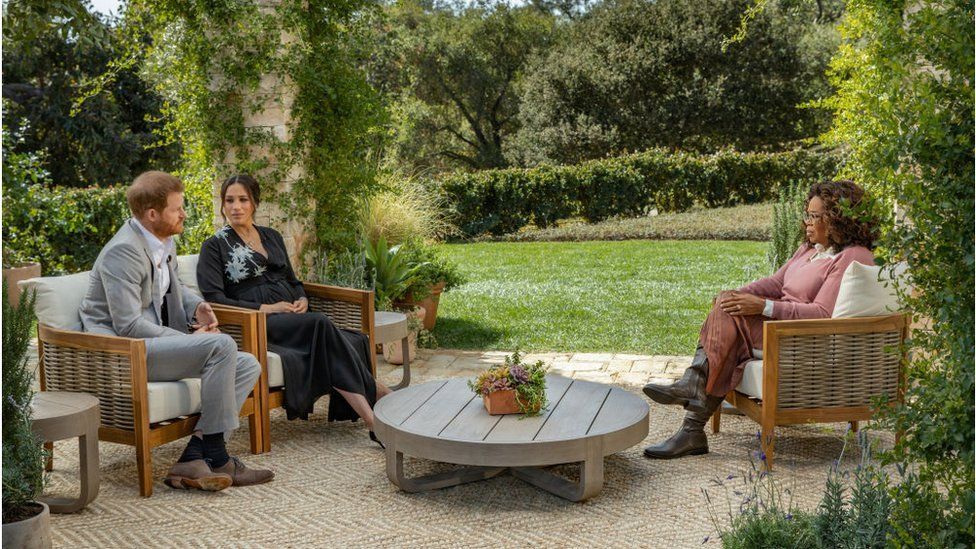 Oprah Winfrey has said Prince Harry clarified it was neither the Queen nor the Duke of Edinburgh who questioned what his son's skin colour would be.

Winfrey told CBS News on Monday the prince "did not tell me who was part of those conversations".

The revelation that a family member wondered "how dark" Archie's complexion might be came during a TV interview that aired overnight in the US.

The Duchess of Sussex had described the remarks as a low point.

"He did not share the identity with me but he wanted to make sure I knew, and if I had an opportunity to share it, that it was not his grandmother or grandfather that were part of those conversations," Winfrey said.

When asked for further details on Monday, Winfrey said she "tried to get that answer on camera and off" but the prince did not elaborate.

She told CBS This Morning that she was shocked to hear about the skin colour remarks during the interview. "Even on the take, you can hear me go, 'whoa I cannot believe you are saying this now'."

When asked why she thinks the couple agreed to speak with her, Winfrey said she felt they "were ready to do it" after having been "lied about for a series of years".

"I said to my team, the most important question to be answered here at the end of this show will be, 'why did they leave'?" Winfrey said.

"And I think the stories of blindsiding the Queen were very damaging to them and also hurtful because they understood clearly that there had been months and months of preparation."

In one, when asked by Winfrey if the couple left the UK because of racism, Prince Harry said that "was a large part of it".

In another clip discussing how the UK press treated other members of the royal family, Meghan told Winfrey that "rude and racist are not the same".

"You've also had a press team that goes on the record to defend you especially when they know something's not true, and that didn't happen for us," the duchess said.

Winfrey also asked Prince Harry if any family members had apologised to him for the reasons he felt he had to leave.

"The feeling is that this was our decision therefore the consequences are on us."