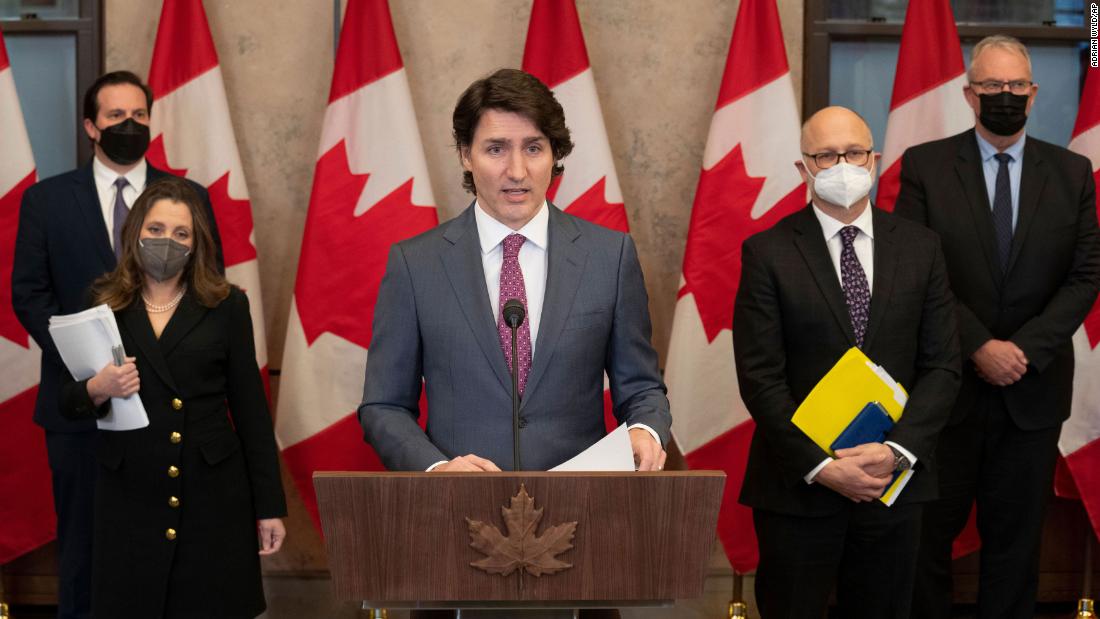 Amid ongoing protests against Canada's Covid-19 regulations, officials in Canada's capital and the police chief have reached a separation agreement, according to the chairperson of the police services board.

While Deans thanked Sloly for his service, she opened the meeting by saying that police were so far unable to achieve peace in the city.

"The OPS (Ottawa Police Service) has been unable to adequately enforce our laws and our residents continue to be terrorized. It isn't good enough," Deans said, adding, "I have watched in disbelief as this carnival of chaos has been allowed to continue."

Deputy Chief Steve Bell is now the interim chief. Deans said the board would implement a new command structure and would shortly appoint a new chief.

Sloly released a statement on social media, saying he was stepping down and had done everything he could to keep Ottawa safe. The department has added resources, enforcement tools and has a new Integrated Command Center, he said.

"I am confidant the Ottawa Police Service is now better positioned to end this occupation," he said.

Sloly had said enforcement has been complex and delicate, pointing out that families are embedded within the protesters. The chief had said repeatedly he did not have enough resources to deal with such a large protest.

Residents have told CNN they were dismayed by the chief's lack of enforcement on their city streets.

The news comes a day after Canada invoked the country's Emergencies Act for the first time in an attempt to sever financial support for protesters' costly blockades at US border crossings.

Financial institutions will now have the power to freeze personal or corporate accounts they believe are being used to fund the illegal protests, Minister of Finance Chrystia Freeland said Monday.

"This is about following the money. This is about stopping the financing of these illegal blockades," Freeland said.

The government will use the law to target those funding protesters who have blocked border crossings -- resulting in economic losses of as much as $500 million a day, she said.

On Monday, the Royal Canadian Mounted Police seized long guns, body armor and high-capacity magazines tied to a group within the protest in Coutts, Alberta, it said.

And now the US is closely coordinating with Canada to share information on people who might try to participate in blockades, Canadian Minister of Public Safety Marco Mendicino told CNN.

"The United States is monitoring carefully the blockades in Canada and what we agreed is that we could continue to share information and to advance the very close collaboration that exists between our CBSA (Canada Border Services Agency) and the (US) Customs and Border Patrol, so that we can identify any potential individuals who may trying to cross the border to advance illegal blockades in Canada," Mendicino said.

The public safety minister has been in regular contact with US Department of Homeland Security Secretary Alejandro Mayorkas he said.

"Given the current moment that we're in ... we're obviously going to do what we can to bring about the end of these illegal blockades," Mendicino said.

Prime Minister Justin Trudeau said Monday he was invoking the Emergencies Act for the first time since it became law in 1988 to blunt the impact of the trucker-inspired protests.

The rallies began when a group of truckers moved into Canada's capital on January 29, clogging streets surrounding the Parliament building and elsewhere in downtown Ottawa to protest a new mandate requiring them to be fully vaccinated when crossing the Canadian-US border or face a two-week quarantine.

They have been joined in Ottawa and at border stops and cities across the nation by others who want an end to other Covid-19 mitigation measures, like mask mandates, lockdowns and restrictions on gatherings.

"These illegal barricades are doing great damage to Canada's economy and to our reputation as a reliable trading partner," Freeland said.

The blockade at the Ambassador Bridge, which was cleared Sunday, impacted about $390 million worth of commerce a day, the minister said. The combined impact of blockades at border crossings, including those in Alberta and Manitoba, has been $500 million each day, Freeland said.

"These costs are real. They threaten businesses, big and small," Freeland said. "The Canadian economy needs (truckers) to be doing legitimate work, not to be illegally making us all poorer."

In addition to allowing financial institutions to freeze accounts suspected of funding illegal protests, Canada is also requiring crowdfunding sites and payment service providers used by protesters to register with the Financial Transactions and Reports Analysis Centre of Canada and report any large suspicious donations -- including digital payments and with cryptocurrencies. Some sites have raised millions of dollars.

While the Emergencies Act allows for the use of the military, the government will not take that step, Trudeau said Monday.

The measure can also temporarily suspend citizens' rights to free movement or assembly, but Trudeau said the government is not overriding the Charter of Rights and Freedoms -- a part of the Canadian Constitution that lays out "rights and freedoms that Canadians believe are necessary in a free and democratic society," according to a Canadian government website.

"We are not preventing people from exercising their right to protest legally," Trudeau said. The law will be limited geographically, in scope and in time, he noted.

The reopening of the Ambassador Bridge was "a win for Michigan's working families who are just trying to do their jobs and for businesses who can get back to shipping their products and produce," Michigan Gov. Gretchen Whitmer said in a statement Monday.

The bridge is the busiest land border crossing in North America, linking Detroit and Windsor, Ontario. It carries nearly 30% of annual trade between Michigan and Canada, Whitmer said.

That blockade, which caused supply chain issues for automakers on both sides of the border, ended when Canadian authorities cleared pedestrians and vehicles that had been blocking access to the bridge over the weekend.

Whitmer thanked US and Canadian border officials and business leaders for their work in resolving the ordeal and said it was important to "ensure that this does not happen again."

The company that owns the bridge echoed that sentiment and issued a "call to action" to prevent future closures.

"We must join together to come up with an actionable plan that will protect and secure all border crossings in the Canada/U.S. corridor and ensure that this kind of disruption to critical infrastructure will never happen again," said Matt Moroun, the chairman of Detroit International Bridge Company.

"They are critical pipelines that supply the goods we need to keep our factories going, our neighbors working and our economies thriving."

In Manitoba, the RCMP said Tuesday that protesters are expected to be gone by Wednesday, the result of a resolution reached with the demonstrators.

Chief Superintendent Rob Hill said officials were confident protesters would depart and that full access to the Emerson border crossing will be restored.

But the standoff at the Coutts border crossing in Alberta took a turn Monday.

Eleven people were arrested, and authorities seized 13 long guns, handguns, multiple sets of body armor, a machete and a large quantity of ammunition and high-capacity magazines connected to a small, organized group within a larger protest at the crossing, Royal Canadian Mounted Police said.

"The group was said to have a willingness to use force against the police if any attempts were made to disrupt the blockade," the statement said. "This resulted in an immediate and complex investigation to determine the extent of the threat and criminal organization."

Capacity limits will also be eliminated in all indoor public settings starting March 1, though masking requirements in Ontario will remain in effect "just a little bit longer," Ford said Monday.

But the loosening of pandemic restrictions has nothing to do with the protests, the premier said.

"Let me be very clear: We're moving in this direction because it's safe to do so," Ford said Monday. "Today's announcement is not because of what's happening in Ottawa or Windsor, but despite it."

He also vowed "serious consequences" for those who cause disruptions while demonstrating in Ontario.

"To those who are still there, to those of you who are there with the sole objective of causing disruption and chaos, there'll be serious consequences for this lawless activity," Ford said.

"We will continue to raise the consequences against those who are holding millions of jobs and people hostage."