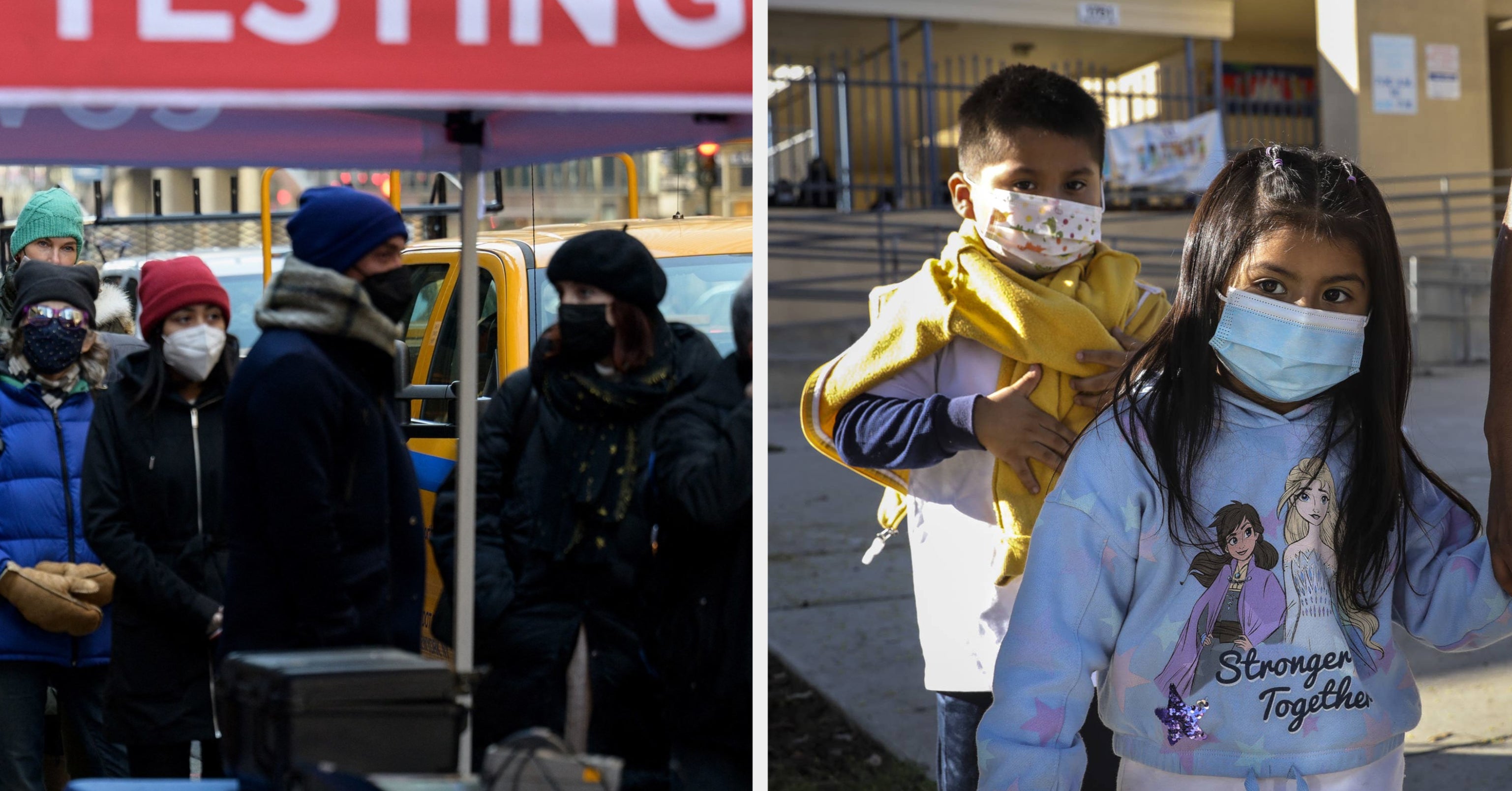 “I wish I hadn’t exposed any of my coworkers, but I didn’t know,” said one person who tested positive after multiple negative at-home tests.

The US set a global record on Monday with 1 million new COVID cases reported in a single day, as the highly contagious Omicron variant spreads and accounts for the majority of cases across the nation.

The 1,017,376 cases recorded on Jan. 3 by the New York Times come with a few caveats: The long holiday weekend caused a backlog in reporting cases, which boosted the number reported on a single day. Meanwhile, testing has been hard to access, which means more people may be positive than what has been recorded.

What we do know is that the country is in a very steep growth period for new cases, with a seven-day rolling average of 480,916. This new phase of the coronavirus pandemic has strained testing availability, disrupted businesses, and frustrated those who are fully vaccinated but catching Omicron, although the vaccines are reducing serious illness and death. 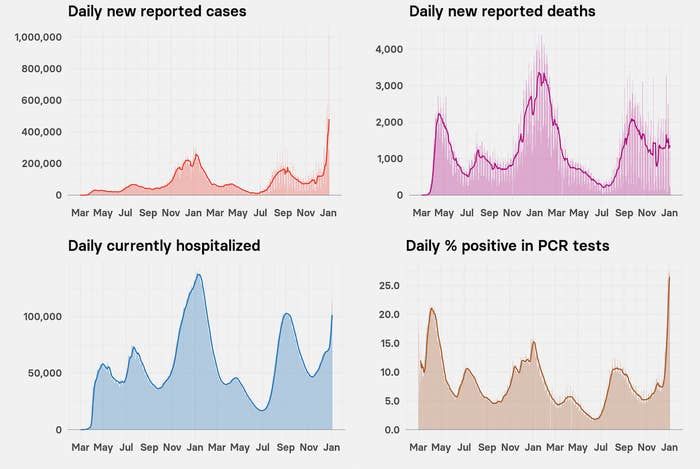 Still, the number of people hospitalized with COVID is surging past the peak of the Delta variant wave in early September 2021, and the percentage of PCR tests turning up positive is at the highest it’s ever been during the pandemic, according to data from the Department of Health and Human Services.

Bay Area resident Brittany McCulley woke up with a sniffly nose, itchy throat, and a minor cough Tuesday morning and immediately went to get tested for COVID. The 22-year-old hairstylist is 27 weeks pregnant, fully vaccinated, and received a booster dose to protect her from the virus. The test was positive.

“I immediately started crying,” McCulley told BuzzFeed News, adding that she felt “absolutely horrified,” “scared,” and “exhausted” by the news. “I’m tired of people acting like nothing is going to affect them, that if they get it, it’s fine because it’ll be ‘mild,’ while it poses serious risks to other people around them.” 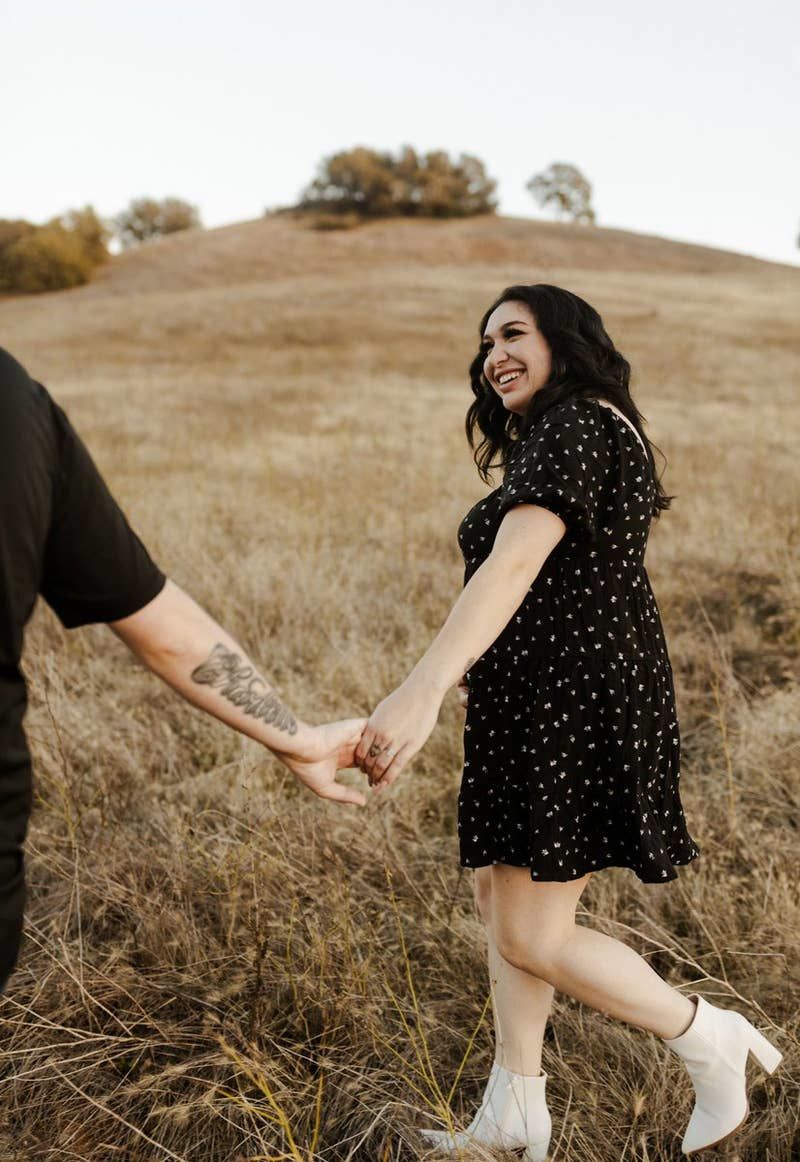 Brittany McCulley is 27 weeks pregnant and tested positive for COVID, despite the fact she is fully vaccinated and boosted.

McCulley will now miss work and two prenatal doctor’s appointments over the next 10 days.

“I’m going to struggle to pay bills now,” she said.

She believes she was exposed at work because coworkers have also begun to feel sick. McCulley said her major concern is potential complications to her pregnancy, such as preterm labor (a risk researchers have stressed for pregnant people who contract the virus).

People such as McCulley, who tested positive after the holidays, posted on social media about their need to change flights at the last minute or voiced concern that family members may also test positive. 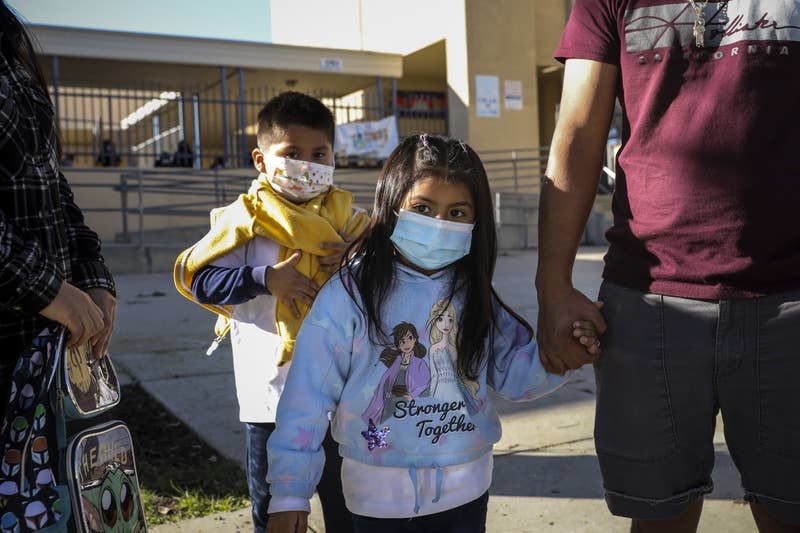 Jose Martinez, 7 (center left), and his sister Julissa, 5, stand with their parents outside the entrance to their school after winter break.

Doctor's appointments, school schedules, and employers have all been thrown into a confusing reality about how to best mitigate the virus and continue in any form of normalcy. Those testing positive also said they are feeling ashamed of putting colleagues and loved ones at risk.

“I’m frustrated more than anything because I wish I hadn’t exposed any of my coworkers, but I didn’t know,” said Lark W., who works at a rock climbing gym in Salt Lake City.

Lark (who did not share their last name for privacy reasons) is fully vaccinated and has a booster shot scheduled for next week. They were exposed to COVID on Dec. 26 and took at-home tests on Dec. 29 and 30, each of which returned a negative result.

“I did the best I could with the resources I had,” the 22-year-old told BuzzFeed News.

Citing the negative tests, they made the decision to go to work. But over the holiday weekend, Lark started feeling sick. On Tuesday morning, they tested positive.

“The fact that there’s so many cases makes it even more maddening that there’s absolutely no support,” they said. “I’m the ninth or tenth person at my job to test positive in the last couple months, and the best they’ve offered is reminding us of the three paid sick days we get per year.”

But three days won’t make up for the extra seven days of lost income.

“I don’t really care about the effect of this on my social life; I can spend 10 days at home no problem,” they said, “but I can’t afford to not work.”

The Centers for Disease Control and Prevention updated its isolation guidelines on Dec. 27, recommending a shorter five-day quarantine period for asymptomatic people, and then again on Tuesday with additional recommendations around antigen testing and travel.

Soaring cases are also coming at a time when high numbers of non-COVID patients are being admitted to emergency rooms for other reasons, experts say, straining resources. According to the HHS data, about 26% of ICU beds are being used for COVID cases as of Tuesday (of 5,448 national hospitals who report this data to the department).

The federal government’s response has been to reiterate the importance of vaccination, the necessity of wearing a mask, and the value of testing and other available methods to stop the spread of the virus.

“You can control how big an impact Omicron is going to have on your health,” President Joe Biden said Tuesday in remarks regarding the record number of reported cases. “If you’re unvaccinated, you have some reason to be alarmed.”

Biden also announced that FEMA has been ordered to provide additional hospital beds and that his administration will double the number of Pfizer-BioNTech COVID treatment pills to 20 million. The first batch of the FDA-approved oral drug was shipped out on Dec. 24.

“They’re a game changer,” Biden said about the pill, which takes months to manufacture. “Production is in full swing.”

But testing remains a frustration around the country, with long lines, a lack of rapid antigen tests, and few ways for people who test positive at home to report that to authorities. Starting next week, insurance providers will be required to reimburse people for at-home tests. Biden said a government website will launch later this month where people can request free at-home tests.

The virus has also posed an issue for schools returning from the holiday break this week. Public school districts in Newark, Atlanta, Milwaukee, and Cleveland have even opted to revert to virtual learning amid the rise in cases, marking a regression to safety measures made early in the pandemic.

Although the federal government is pushing hard for schools to remain open, many have struggled with staffing as teachers and administrators become ill themselves. And students who test positive risk falling behind as classes commence.

Tiki Duquella is a fully vaccinated student at a private high school in Knoxville, Tennessee. He tested positive for COVID on Tuesday and will have to miss a week of school and cancel a weekend trip to New York to visit friends. While his symptoms are “very minimal,” he said, he was glad a test confirmed they were COVID-related.

“I went to get a test because my school started up again and I did not want to get my classmates/faculty sick,” Duquella said. Like so many in the country, he is already struggling to catch up just days into the new year. “It’s the first week, so I feel like it will be pretty difficult to start my second semester a week behind,” he said.