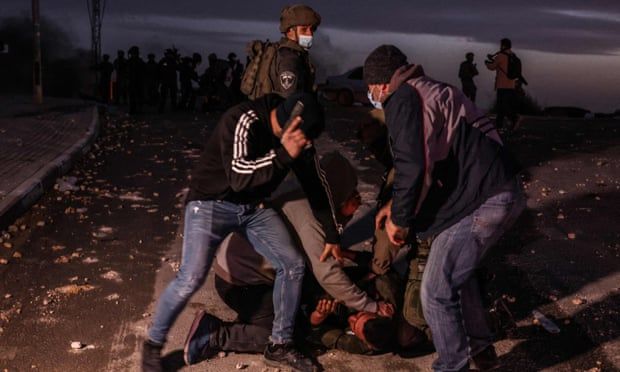 Last May, as war in Gaza raged and clashes over Palestinian access to Jerusalem intensified, large protests swept across almost every Arab and mixed city in Israel. In Haifa, the Israeli coastal city with a mixed Arab and Jewish population, Yousef Ibrahim attended almost every demonstration.

Over the years, the activist and organiser from Daburiyya, an Arab village in the north of Israel, has had his fair share of confrontations with Israeli undercover agents who pose as Arab citizens, known as Mista’arvim. But this time was different, he said.

Previously, the agents had been a ghostly presence, more sensed than seen, but this time, activists like Ibrahim, along with legal organisations, sent out warnings on WhatsApp and Telegram groups to raise awareness about the presence of these agents – and instructions on how to avoid being arrested by them.

Unlike in the past, when they would run away from Mista’arvim, Ibrahim and his fellow activists had begun openly confronting them and even directly clashing with agents, he said. The shift in the power dynamic might mean that these agents are not as powerful as they once were.

“The strongest of us marched in the front row” holding hands to protect the thousands walking behind them at a Haifa protest in May 2021, recalled Ibrahim. “Then the stun grenades and rubber bullets starting going off. They dragged away two girls and a guy, but we managed to pull them back in. It was hard but we did it.”

Mista’arvim, a word derived from Arabic that translates as “those who live among the Arabs”, are elite special operations units which include Jewish, Bedouin and Druze recruits developed by Israel’s powerful military and intelligence services. Inside Israel, where Palestinian citizens are subject to civil law rather than the military law that applies in the Occupied Territories, the agents carry out intelligence gathering including observing protests to identify organisers and recurring faces. 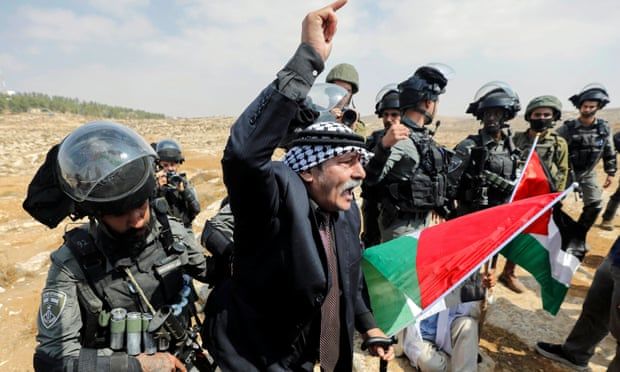 A Palestinian demonstrator gestures as he is pushed by border police officers during a protest in the Israeli-occupied West Bank.

The Mista’arvim also have law enforcement powers, and in recent years have become notorious for conducting arrests in which plainclothed agents infiltrate a crowd and then suddenly abduct a suspect.

According to Esmat Omar, a Palestinian expert on Israeli affairs and intelligence, one of the goals of these units is to create an atmosphere of mistrust, fear, and paranoia among protesters “because you can’t really know if this person next to you [at a protest] is another protester like you, or an undercover agent that can abduct you at any moment or pull out a weapon”.

Palestinian activists, lawyers and young people say Mista’arvim deployment against a country’s specific ethnic minority is undemocratic. Israel has only recently admitted to using them against its own citizens.

In a statement, the Israel police said: “The border police’s undercover Mista’arvim units operate in various sectors throughout the country, with their main missions being disguised activity against crime gangs, dealing with disorderly conduct with advanced capabilities and fighting terrorism.

“We will continue to act with determination while using all the means at our disposal, all for the sake of maintaining the safety and security of all citizens of the State of Israel.”

Messages have spread in WhatsApp groups advising young protesters to cover their faces at all times to avoid being filmed by Mista’arvim; to wear clothes that fully cover their skin so they won’t be easily injured by stun grenades or teargas; to write down a lawyer’s number on their arms in case they get arrested and their phones are taken away; and to make their waists visible and look out for those whose shirts are not tucked into their trousers, hiding guns in their belts, as they might be Mista’arvim.

Unlike during previous uprisings – most notably the first and second Intifadas – the agents’ presence during May’s protests in Arab and mixed cities in Israel is well documented due to the rise of social media and mobiles. 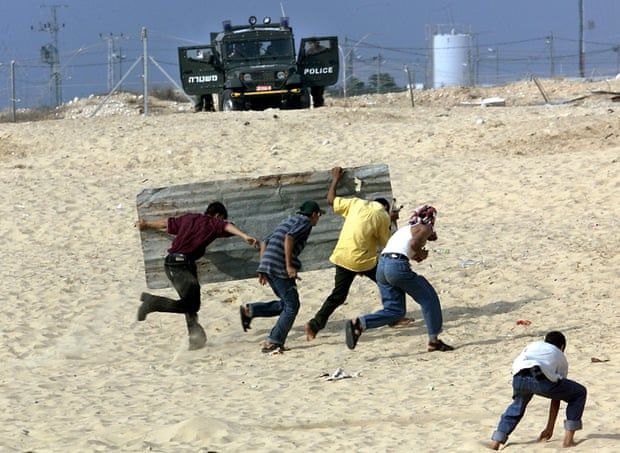 Palestinian youths take cover from police behind a sheet of corrugated iron in 2000. The second intifada erupted in September that year.

Two Palestinians and two Israelis died during the May clashes, while hundreds on both sides were injured, in the worst violence in Israel in years.

This protest was part of a nearly month-long uprising across Israel and the Occupied Palestinian Territories triggered by expulsion threats facing Palestinian families in a neighbourhood of East Jerusalem, which escalated into an 11-day war between Israel and Hamas in the Gaza Strip. A total of 256 Palestinians, including 66 children, were killed, along with 13 people in Israel.

Although Palestinian citizens of Israel make up about a fifth of the population, the community have often been seen as passive observers in the 74-year-long conflict. In May, however, they showed an unprecedented level of solidarity by protesting in large numbers.

The protests turned violent in mixed cities and a widespread campaign of arrests began: about 2,000 people were arrested by the Israeli police, 91% of whom were Arab, according to police reports.

Embedded in this chaos were Mista’arvim. Rawan Bisharat, an activist from Jaffa, said these units were no longer bothering to operate in the shadows. “For me, it’s like they came out of the closet.” She recalled that at one Jaffa protest she suspected one man to be an undercover agent. “To my surprise, he said: ‘Yes, I’m here, and there are another 19 of us here, but we are not bothering you, are we?’”

Afnan Khalifa, a lawyer and activist from I’bilin, alleged that Mista’arvim arrests were usually more violent than those of regular police because they did not wear identifying name badges. “They feel freer to use violence because they are anonymous,” she said.

Palestinian citizens of Israel have long complained that their government and police are working against them. Sixty-five laws in the Israeli constitution explicitly discriminate against the country’s Arab population and classify them as second-class citizens, according to the Adalah Legal Center for Arab Minority Rights in Israel.

In March 2021, Adalah sued the Israeli police over the illegal deployment of undercover Mista’arvim agents who were filmed violently arresting and attacking protesters. Adalah says these practices violate the democratic right to peaceful protest and argues that the Mista’arvim presence in Arab cities challenges the status of Israel as a democracy.

Creating two separate systems of law enforcement was “one of the characteristics of the apartheid regimes that are prohibited in the world and which contravene international law”, said the Adalah lawyer Wissam Sharaf.

The Hebrew University law faculty’s Ido Rosenzweig agrees. “Israel has an ongoing problem with racial discrimination under international law,” he said, so “if the goal is racial profiling, then you have a problem.”

However, he added that there were no limitations on the use of undercover units for law enforcement purposes within the state borders, “as long as they identify themselves as a law enforcement agent [when conducting an arrest], and they’re operating in a manner that won’t cause additional harm or risk anyone’s life.”

In October 2020 several intelligence officers in civilian dress arrested Yusuf Ibrahim at a protest, interrogated him for three days and then released him without charge. He said that his arrest occurred after a Mista’arvim agent he had outed at a previous protest reported him to the police, claiming Ibrahim was inciting violence and threatening to kidnap soldiers. The police did not find any evidence of that.

Ibrahim said he would continue to organise protests and be on the frontlines chanting and leading the crowds, but he envisioned a long struggle against a shadowy adversary.

“He was out to get me because I was out to get him. I still see him at every protest I attend, lurking in the back, watching my every move, and reporting back to the police. Every single protest.”