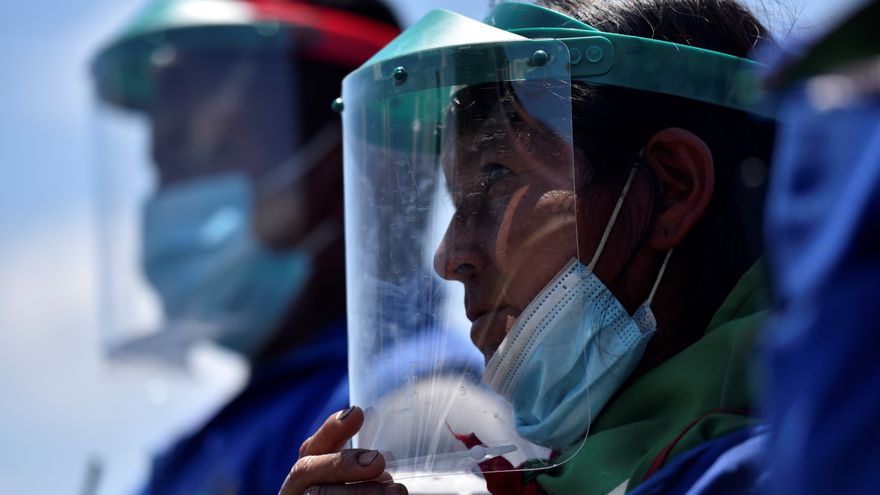 Peaks, outbreaks and deaths, but ... how about the aftermath of COVID-19?

Spikes, outbreaks, infections, deaths, the world got used to these words around COVID-19; America (18,031,681 infections) and Europe (7 million infections) are struggling to contain the virus that already has 37.6 million affected worldwide, but now the focus of attention is on the aftermath of the virus in the recovered patients.

At a time when coronavirus cases continue to multiply at different rates in various countries, the deaths worldwide are at 1,078,699, of which America already adds 590,000, after a day in which 5,500 new deaths were reported, according to the World Health Organization (WHO).

Latin America, registering more than 10 million cases and 368,000 deaths in a region that, after 7 months of pandemic, tries to avoid new confinements, as occurs in some European countries.


While the Johns Hopkins University map continues to update the case registry, the United States hanging on to the first place as the most affected country with 7.7 million infected and 214,985 deaths, followed by India (7.1 million and 109,150 deaths) and Brazil in third place with 150,689 deaths and 5,103,408 infections.

In addition to the situation in America, it is now Europe that after having lowered the numbers of infected and deceased again with the outbreaks, the figures have spiked up, generating concern in the health authorities.

But beyond this situation, what is really creating an alert are the recovered. The WHO technical director for COVID-19, Maria Van Kerkhove, pointed out this Monday that not only are serious cases and deaths from COVID in the world worrying, but also the side effects of the disease in patients who already have recovered.

The recovered patients are already more than 28.4 million worldwide, three out of four, and of the more than 8 million active cases, one percent (68,000) are in serious or critical condition.

And this is where the concern lies since only now are we beginning to see these effects on the heart, brain, lungs or mental health, added the expert to explain why it is still important to combat the increase in infections despite the mortality of the coronavirus is now relatively low, at only 0.6 percent of cases.

An example of this is what happened today with the president of Guatemala, Alejandro Giammattei, who is undergoing iron treatment after developing anemia caused by the medical management he used to recover from the COVID-19 that he contracted last September.


The electoral environment in the United States marks the controversial statements made over the weekend by President Donald Trump, who resumed his presidential campaign activities after overcoming the contagion of COVID-19 by ensuring that he is immune the virus.

Trump assured that he is in very good shape to fight the battles and this Monday night he prepares for his big rally in Standford, Florida.

His doctor Sean Conley, in a memorandum released by the White House shortly before the president participated in the Florida rally, noted that the president has given a 'NEGATIVE', on consecutive days.


In South America, although Brazil continues to be the first with the most infections and deaths, Colombia (fifth in the world) already exceeds the barrier of 900,000 infected and some experts fear that it will reach one million before a possible new outbreak in November.

Argentina with 894,206 positive cases, sixth in the world, and third in the region, seeks that the restrictions due to the pandemic are respected after a document signed by the governors of the 24 provinces, while Buenos Aires announced the return to face-to-face classes, which will be done progressively from this week and through a "bubble" system.

Peru, eighth place that is close to 850,000 contagions 33,305 deaths, signed non-binding agreements with 11 international laboratories, out of a total of 13 with which they hold talks to ensure the future provision of vaccines against COVID-19.

Mexico, ninth in the world, adds 83,781 deaths and 817,503 cases and has already reported the first case of coronavirus and influenza in the same person, a fact that is beginning to worry the country's medical community since the convergence of both diseases could put more tension the already weakened health system.


The situation of protests in Costa Rica against a loan from the International Monetary Fund (IMF) has raised tensions in the midst of the pandemic, after a group of protesters and the Public Force clashed on Monday in the vicinity of the Presidential House.

The country has become the focus of attention because almost 40 containers with medical supplies to combat COVID-19 in Central America are about to collapse after being stranded for several days on the border between Panama and Costa Rica, which is still blocked by the protests.

Because of the demonstrations, which began on September 30, about 1,100 containers are stranded in the Paso Canoas area, the main border between the two countries, of which 37 carry medicines, supplies and oxygen to combat the virus, the president of the National Chamber of Transportation of Panama (Canatra), Andrés Muñoz, told EFE.

At least 422,400 people have been infected with COVID-19 and more than 8,000 have died from the disease in Panama, Costa Rica, Nicaragua, El Salvador, Honduras and Guatemala, according to government data.