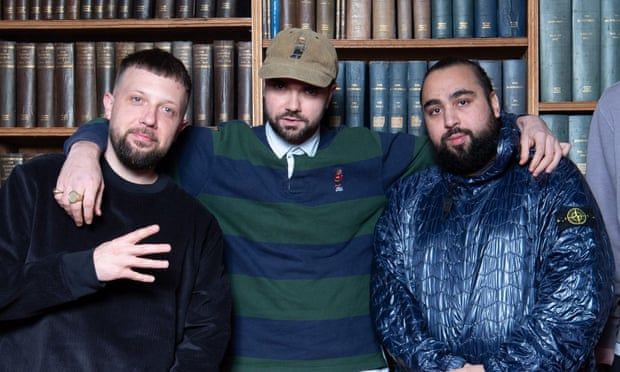 Asim Chaudhry and Allan Mustafa say much of comedy still dominated by white, middle-class people
The entertainment and journalism industries lack the diversity necessary to reflect British society, the creators of the acclaimed comedy People Just Do Nothing have said.

Speaking to the Radio Times, the stars of the Bafta-winning programme said much of comedy remained dominated by people from middle-class backgrounds, while they said they had been accused of racism by white journalists when depicting their own communities.

“What was so weird was these white journalists early on telling me that doing Chabuddy G’s accent was racist,” said Asim Chaudhry, who plays the character. “He was based on my dad. How can they think I’m mocking the culture? I am the culture. I just don’t think they’d actually met anyone from that culture before. For some reason, in our industry, all you see is white, middle-class people.”

His co-star Allan Mustafa, who is also known as Seapa and plays MC Grindah in the programme, agreed that a lack of diversity remained a problem in comedy. “We were coming not long after that ‘anti-chav’ comedy of Little Britain, and just doing things on our terms.

“You shouldn’t have to come from Oxford or Cambridge to be funny, but it’s still occurring in the industry in a lot of ways. It’s changing but it needs to change a lot more – not just class but ethnicity, gender. There’s still not enough behind the camera.”

Chaudhry has spoken publicly about the dynamics of race in comedy in the past, setting out a conversation he had with a white correspondent in 2020 who asked why some jokes could cause offence if they made them but would be less likely to do so if Chaudhry did.

“Chabuddy G is … an intricate, three-dimensional creation with depth, soul and heart,” he wrote to the correspondent. “Yes, you can do the accent too, but you need to put time and effort into it as it needs to [be] really good so it shows you care about the impression and not just being offensive.”

Asked to elaborate on why some things might cause more offence when said or done by a white person, he explained: “You have to put yourself in that person’s shoes. It’s empathy. Doing an accent badly can be offensive because it can trigger past trauma. When I was your age, people used to do bad Indian accents to me to mock me and it was very hurtful.

“You having a laugh is not as important as someone feeling hurt because you’re mocking the way they or their parents speak.”