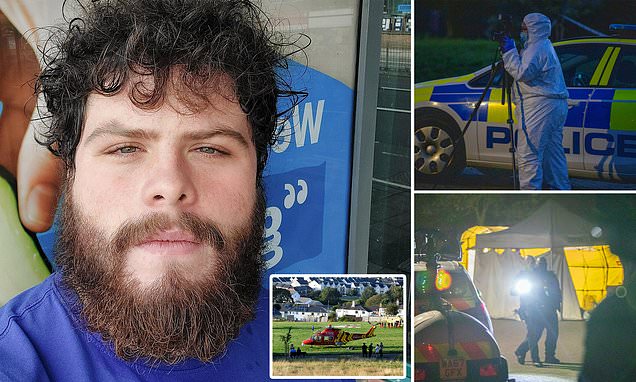 UK: gunman blasted five people to death in Plymouth before turning his gun on himself

Several witnesses reported that apprentice crane operator Davison, 23, had carried out the attack which left a girl of five among those killed.

He is said to have shot members of his own family before taking to the streets and opening fire on strangers. His rampage left the girl, two women, and two men dead with the majority of his victims not believed to be known to him. Two dog walkers were among those shot.

Witnesses have described seeing the gunman dressed in black and grey and kicking down the door of a semi-detached house and opening fire in the Keyham area of the city just after 6pm yesterday.

He was carrying a long-barreled gun and was seen fleeing to the rear of the property and into a park where he allegedly ran into the two dog walkers and opened fire.

The area of the naval port city where the killings took place was put in lockdown as emergency response teams raced to the scene.

Local MPs urged residents to 'remain calm' and stay indoors as they awaited more information, adding that it was a 'grim day for our city and our community'.

The incident – the first in Britain involving an 'active shooter' for 11 years – was so serious that Home Secretary Priti Patel was given regular updates. Security sources said it was not being treated as a terror incident.

Sharron Turner, 57, who lives behind the scene of the shooting, said that a gunman had 'kicked in' the front door of a semi-detached house before shooting a young mother and her daughter, who was aged about five.

'We heard a number of loud bangs which I said sounded like gunshots,' Miss Turner told The Times. 'Then he ran into the park and there were further shots. I heard someone say he had shot his brother.'

After the attack the gunman escaped through a park behind the house in Northdown Crescent and shot two dog walkers, she claimed.

A second witness wrote: 'I've just had to emergency drive out of my house. There's [someone] on the rampage in my cul de sac with a real gun and he's already shot two people. They are laying on the ground. One is dead, blood everywhere. I'm shaking like a leaf.'

Robert Pinkerton, 54, told the BBC he had 'bumped into a bloke with a shotgun' after he heard a 'loud bang'.

Mr Pinkerton then saw an injured woman in the doorway of a hairdressers and witnessed a man trying to give her medical attention.

While local resident Michelle Abdullah wrote said: 'Sad day, a man shot his whole family then went on a random shoot out. Police right outside my house. Three air ambulances at the park out my back garden.'

Last night a video posted on social media showed a body covered in a sheet lying on a pavement as an armed policeman stood close by.

One witness told MailOnline: 'I was at my mate's house after going to the gym. We were in his kitchen making some sandwiches and suddenly we heard shouting followed by screaming.

'We really thought nothing of it as the area can be noisy sometimes. We soon after heard what we thought was a firework going off so then walked towards the front off the house.

And resident, John, said: 'I heard the air ambulance helicopters, and two of them landed in the playing field behind us.

'Then we could hear police cars screeching and we saw armed response officers running up the hill, carrying guns. And loads of ambulances arrived. I went out to check that people were all right and to ask if there was anything we could do, and the Police Community Support Officers told everyone to get back indoors.

'Then we saw the ambulances take people away. It all seemed to be happening at the man's family home, I think. People are saying that the man has killed himself. He's only a young guy, late teens or early 20s.'

In the aftermath of the attack, Johnny Mercer, the Conservative MP for Plymouth Moor View, sought to reassure his constituents on Twitter, saying the incident was 'not terror-related' and the suspect involved was not 'on the run'.

He added: 'Awaiting confirmation of number of victims but this looks like a very grim day for our city and our community.

'Please can I ask that you think of the families and our community and not share any images or videos of any of the victims. #keyham.'

And Home Secretary Priti Patel said: 'The incident in Plymouth is shocking and my thoughts are with those affected.I have spoken to the Chief Constable and offered my full support.

'I urge everyone to remain calm, follow police advice and allow our emergency services to get on with their jobs.'

'However it's clear tragedy has hit Keyham. My thoughts are with the families and neighbours of those caught up in this nightmare. I pay tribute to our emergency services who ran towards events we'd all run from. '

Elsewhere, shadow home secretary Nick Thomas-Symonds tweeted: 'Truly terrible news. Thinking of the families and friends of those who have died and those injured. Thank you to our remarkable emergency services.

'I've been in contact with local representatives to express my support for the whole community of Plymouth on this awful evening.'

And Plymouth Argyle FC tweeted: 'Our hearts go out to victims of tonight's tragic incident in our city, alongside their families, friends, and the wider Plymouth community.'

Tonight, London Mayor Sadiq Khan wrote: 'Deeply saddened by the loss of life in Plymouth this evening. My thoughts and prayers are with all those affected and the emergency service workers responding to this tragic incident.'

Elsewhere Alison Hernandez, police and crime commissioner for the area, said: 'Aware of tonight's tragic incident in Plymouth. Thank you to Devon and Cornwall Police for dealing with the situation. Thoughts with those directly affected and the City of Plymouth tonight.'

Devon and Cornwall Police said: 'Police were called to a serious firearms incident in Biddick Drive, in the Keyham area of Plymouth at around 6.10pm today [Thursday 12 August].

'Another female treated at the scene for gunshot wounds, died a short time later in hospital.

'All of the next of kin of the deceased have been located and informed by Devon & Cornwall Police officers.

'Devon & Cornwall Police would stress this is not a terrorism related incident.

'The area has been cordoned off and police are not looking for anyone else in connection with the incident.

'Investigations are continuing into the incident and disruption to the road network in the Keyham will remain throughout the night.

'Police continue to ask any members of the public with mobile phone footage of the immediate aftermath of the incident not to post this on social media platforms and to respect those families who have lost loved ones this evening.'

Earlier today, a South Western Ambulance Service spokesman said: 'We were called at 6.12pm to an ongoing incident in Plymouth.

'We responded to the incident with a significant number of resources, including Hazardous Area Response Teams (HART), multiple ambulances, air ambulances, multiple doctors and senior paramedics. We will provide an update here in due course.'

A nearby school sports centre has been closed down and people are being told to stay indoors by police.

Cordons have also been put in place around a block of flats to prevent pedestrians accessing the area.

And Drake Circus Shopping Centre in Plymouth has also been evacuated as a precaution.

The last active shooter incident was the Cumbria shootings on June 2, 2010, when taxi driver Derrick Bird went on the rampage in Whitehaven and the surrounding countryside, killing 12 people and injuring 11.

Other mass killings in the UK since then have involved explosives or knife attacks.
#Priti Patel