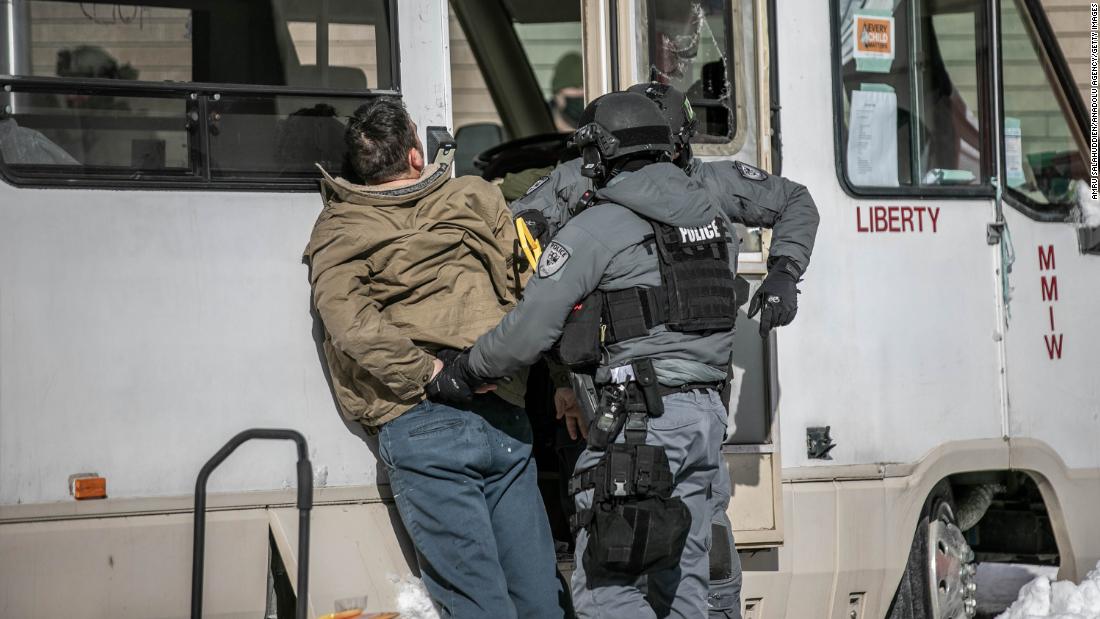 Police arrest 47 of the remaining protesters in Ottawa

Police say they have made 47 arrests in Ottawa Saturday as they cleared downtown, a day after a weeks-long protest turned violent.

City, provincial and federal law enforcement officers began an unprecedented operation Friday morning to remove demonstrators, their trucks and cars, that have been blockading the streets. On Friday, more than 100 people were arrested and 21 vehicles were towed.

Another 38 vehicles have been towed since Friday, police say.

Wellington Street in front of Parliament has been cleared. Police say they will continue restoring the streets to normal order over the coming days.

Tensions between Canadian authorities and protesters have been simmering for weeks as crowds and idling trucks filled the capital, demanding the elimination of Covid-19 preventative measures including mask and vaccination requirements.

"Protesters continue to be aggressive and assaultive on officers. They are refusing to comply with the orders to move," police tweeted Saturday about 12:20 p.m. ET. "You will have seen officers use a chemical irritant in an effort to stop the assaultive behavior and for officer safety."

"One protester launched a gas canister and was arrested," Ottawa police said in a tweet.

Police said their response would have public and officer safety in mind.

"We were slow and methodical, yet you were assaultive and aggressive with officers and the horses. Based on your behavior, we are responding by including helmets and batons for our safety," police said.

Parliament was under a "hold and secure" order similar to a lockdown.

On Friday, the gridlock reached a crescendo when Ottawa police say protesters assaulted officers and tried to remove their weapons. One person was arrested after throwing a bicycle toward a police horse, police said, and by the end of the day, more than 100 were arrested and 21 vehicles were towed.

Demonstrators have been blockading Ottawa streets since January 29; despite threats of legal consequences, many showed no signs of backing down. Law enforcement officers began an unprecedented operation Friday morning to remove protesters and their vehicles.

On Saturday, Legislators resumed emergency debate on the Emergencies Act, which had been interrupted Friday, House Speaker Anthony Rota said in a statement.

The Emergencies Act -- which is being invoked for the first time since it passed in 1988 -- can provide for the use of the military but may not necessarily lead to that, and the Prime Minister said the government is not bringing in troops.

The points of contention have become more delicate in recent days as some protesters placed young children between them and police. CNN has observed those children on the protest site in the last several days.

"This is a reminder if you bring a minor with you to an unlawful protest you may be charged and be fined up to $5000 and potentially spend up to five years in prison," police said in a tweet.

A primary goal of Prime Minister Justin Trudeau's invoking of the Emergencies Act is to help curtail funding to Ottawa demonstrators, officials have said.

And Trudeau has pointed out that some people in the US, as well as elsewhere, are funneling funding to the protesters.

"We see that roughly half of the funding that is flowing to the barricaders here is coming from the United States. The goal of all measures, including financial measures in the Emergencies Act, is to deal with the current threat only, and to get the situation fully under control."

Meanwhile, officials in US are concerned that similar unrest may arise in Washington, DC, as President Joe Biden prepares for the State of the Union address on March 1. 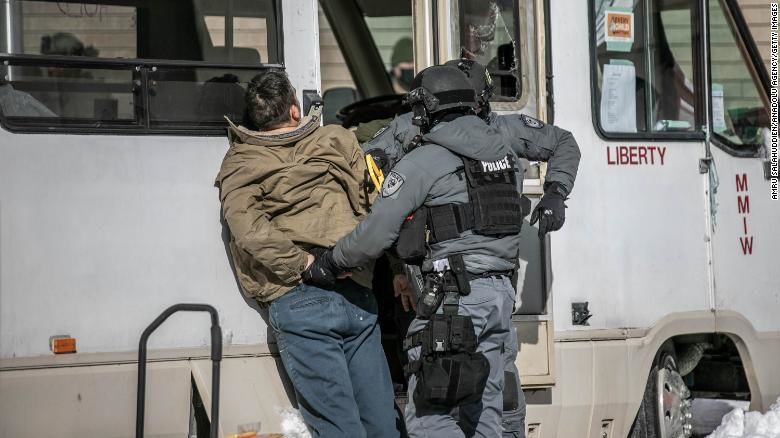 Several people arrested earlier this week have been charged in the protests, which have evolved from opposition to a trucker vaccine mandate to encompassing a disdain for all Covid-19 safety measures.

He was set to appear in court Saturday.

Barber had a contested bail hearing Friday, attorney Diane Magas said in an email to CNN. He was released on the condition that he leave Ottawa and a bond, she added. Lich is scheduled to appear in court Saturday morning for her arraignment.

This week, blockades to border crossings in Alberta and Ontario culminated in arrests as police cleared the areas. Four people were charged with conspiracy to commit murder at the blockade at Coutts, Alberta, and multiple weapons and rounds of ammunition were seized.