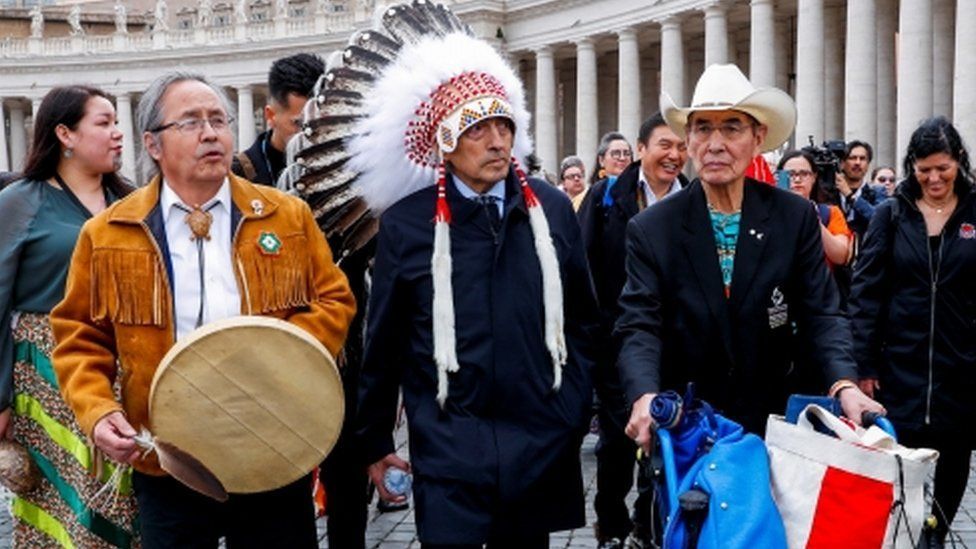 Pope Francis has apologised to a Canadian indigenous delegation for the Catholic Church's role in the country's residential school system.

The schools, operated for more than a century, were run as part of government policy to assimilate indigenous children and destroy their cultures.

The Roman Catholic Church operated up to 70% of residential schools.

Echoing other indigenous leaders gathered on Friday, Dene Nation National Chief Gerald Antoine called the papal apology "long overdue", saying it was a day "that will be lifted up in history".

Chief Antoine and his fellow leaders also said it will be important that a formal apology be made in Canada, one of the 94 "calls to action" released in 2015 stemming from the landmark Truth and Reconciliation Commission (TRC), which looked into the legacy of residential schools.

The Pope on Friday confirmed he would make a trip to Canada later this year to meet indigenous communities and to assist with reconciliation efforts.

In his apology, Pope Francis said the residential schools caused him "pain and shame" and asked for God's forgiveness.

"For the deplorable behaviour of those members of the Catholic Church, I ask forgiveness from God and I would like to tell you from the bottom of my heart that I am very pained," he said, speaking in Italian at the Vatican. "The content of faith cannot be transmitted in a way contrary to faith itself."

"I join my brother Canadian bishops in apologising," he added.

Natan Obed, president of Inuit Tapiriit Kanatami, thanked the Pope for his apology - delivered in "an empathic and caring way" - and said he was touched by the "way in which he [Pope Francis] expressed his sorrow and also the way in which he condemned the actions of the church in particular".

The pontiff was speaking to the whole delegation after separate private meetings during the week with its First Nations, Métis and Inuit representatives.

Friday's apology was the result of encounters between Pope Francis and indigenous leaders and residential school survivors, the Canadian Conference of Catholic Bishops said in a statement.

"Pope Francis was moved by their courage, their commitment and their resilience in the face of suffering," the statement said.

The visit by the delegation was organised by the conference, which has apologised for the suffering experienced at residential schools.

On Friday, Canadian Bishop William McGratten said the Catholic church in Canada held a "deep sense of gratitude" for the Pope's apology, and that it must be followed by action.

The church is committed to releasing records related to residential schools, he said, something that indigenous advocates have called for for years.

During the lifetime of the schools, an estimated 150,000 children were taken from their homes.

Many were subjected to abuse, illness and malnutrition and the TRC report called the residential schools system a central element of a policy of "cultural genocide".

Since last summer, thousands of unmarked graves, most believed to belong to former students, have been discovered at former school sites across the country.

Indigenous delegations unsuccessfully lobbied both Pope John Paul II and Pope Benedict for an apology. The latter issued a statement of regret in 2009, but without an acknowledgement of the church's wrongdoing.