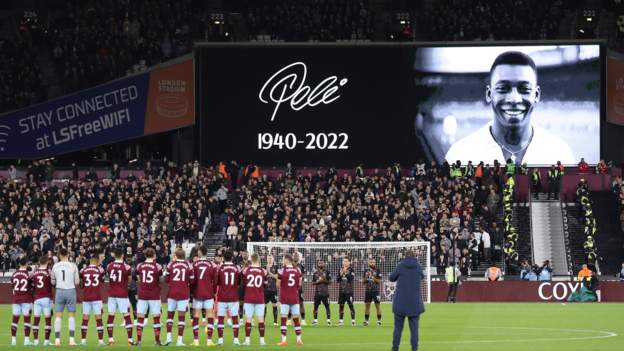 The Scottish Professional Football League has also suggested all clubs pay their respects with a minute's applause or "other appropriate gesture".

Three-time World Cup winner Pele passed away on Thursday at the age of 82.

Brazil has declared three days of national mourning as tributes pour in.

In the later kick-off, Liverpool goalkeeper Alisson and midfielder Jordan Henderson placed flowers on the centre circle at Anfield before the side's match against Leicester.

All 10 Premier League games over the weekend will hold similar tributes.

Speaking after Liverpool's 2-1 win over Leicester, Alisson told BBC Sport: "I believe everyone from the world of football is feeling something about his loss. We Brazilians are grieving. He is a huge loss but at this moment we have to look to the things that he did because he changed the world of football, not just for Brazilians but for everybody.

"There is a lot of talk about who was the best and who is the best, but for us he is the best of all time. What he did on the pitch reflected the nation, he put the Brazilian flag at the highest standard, not just him but his team-mates as well."

A minute's applause and black armbands were also seen at EFL fixtures on Friday and other clubs will follow suit on 1 and 2 January.

Football's world governing body Fifa has lowered flags at its headquarters in Switzerland to half-mast for Pele "as a symbol of mourning and respect".

The Italian Football Federation (FIGC) says it has "arranged a minute's silence to remember Pele," in forthcoming games, while Pele's contribution to the sport will similarly be recognised at matches in Spain and France this weekend. 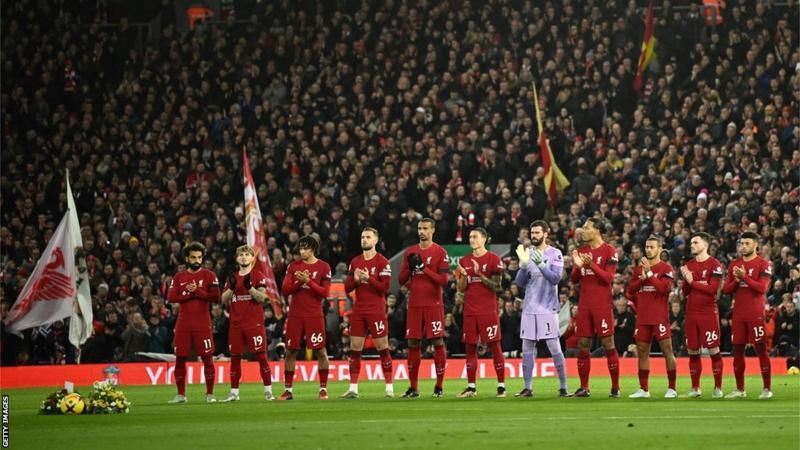 At Liverpool v Leicester, players placed flowers in the centre circle
Managers have also paid respect, with Manchester City boss Pep Guardiola saying Pele made football "a better place" for his ability to give people an emotional connection to the sport.

"There's not another show or event that can produce this type of emotion. It's part of what these exceptional players do," Guardiola explained.

"Football is football thanks to these types of people, players, human beings. Before, the number 10 was just a number and after him it became something special. Every top player wanted to wear number 10 in their team.

"What he has done for football is there and always will remain.

"These type of players will be forever, they will be eternal."

Tottenham manager Antonio Conte said Pele was "one of the most important players in the world. We are talking about the story of football".

He added: "I was lucky to know him and honestly I am really sad for his death. Also because Pele was a person who was an important person for football. One of the most popular. Maybe the most popular player in football.

"His behaviour, it was always a person who lived without arrogance and showed always to be a humble person despite, in my opinion with [Diego] Maradona being the best players in the world."

Arsenal's Mikel Arteta said: "He was probably the most complete player that the game has ever seen, and it is a big loss."

"In my era, you grew up knowing of Pele, thinking of him as the best player the world had ever seen at that moment," Howe added.

"It's very, very sad. Whenever an icon passes away, it's a very sad moment for football. Seeing the reaction of everybody, media, everyone connected with football, he's certainly well remembered around the world."

Everton manager Frank Lampard said: "The reach of his game was huge and has stayed. That name will continue for ever more. It's a sad day for football."

Fulham will pay tribute to Pele before their celebrations of the life of club stalwart and 1966 World Cup winner George Cohen.

Cohen died on 23 December and Fulham's home match against Southampton on Saturday will be their first game at Craven Cottage since his passing.