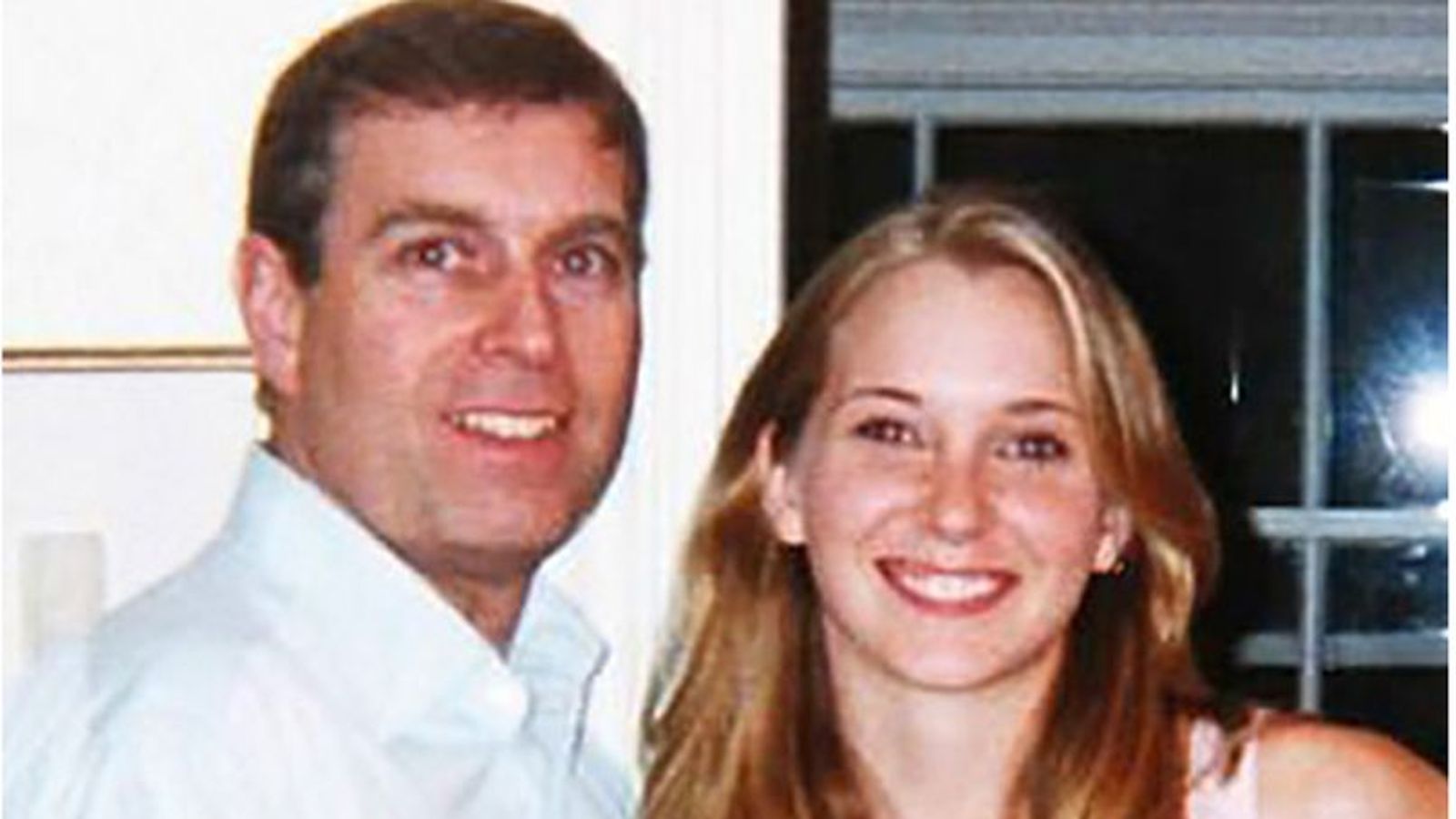 Prince Andrew: Jeffrey Epstein's 2009 settlement with Virginia Giuffre to be made public next week

The 2009 agreement between Jeffrey Epstein and Prince Andrew's accuser Virginia Giuffre, formerly Virginia Roberts, will be released on or around 3 January following an order by US judges. It will come as Ghislaine Maxwell faces years in jail.
A past settlement between sex offender Jeffey Epstein and Virginia Giuffre, which could be key to a legal case involving Prince Andrew, is set to be made public next week.

The 2009 agreement between Epstein and Ms Giuffre, formerly Virginia Roberts, will be released on or around 3 January following an order by US judges.

It will come after Ghislaine Maxwell, a friend of Andrew, was found guilty of recruiting underage girls to be sexually abused by her ex-boyfriend Epstein, who killed himself in 2019 while awaiting trial on sex trafficking charges.

Ms Giuffre has accused Andrew of forcing her to have sex more than two decades ago when she was under 18 at the London home of Maxwell, and abusing her at two of Epstein's homes.

Andrew has denied the claims and has not been charged with criminal offences.

The Duke of York's lawyers have also argued the 2009 settlement between Epstein and Ms Giuffre releases him from liability.

This is, they said, because it covered "royalty" and that Epstein had insisted it cover "any and all persons" who Ms Giuffre might sue.

But Ms Giuffre's lawyers have countered that the agreement "on its face" applies "at most" to people involved in underlying litigation in Florida, thereby excluding Andrew.

They have said that the Queen's second son should not use the 2009 agreement as a "get out of jail free card".

A New York judge is due on 4 January to hear arguments on whether to dismiss Ms Giuffre's civil lawsuit against Andrew, which is seeking unspecified damages.

The Duke of York's lawyers this week called for the case to be halted or thrown out because Ms Giuffre actually lives in Australia.

They claimed this means the New York court may not have "jurisdiction" over the lawsuit.

Ms Giuffre's legal team have described it as "another in a series of tired attempts by Prince Andrew to duck and dodge the legal merits" of the civil case.

If judges do not throw out Ms Giuffre's lawsuit against Andrew, a trial could be held between September and December 2022.

Gloria Allred, a lawyer who represents 20 accusers of Epstein, said it was now a matter of having to "wait and see" if the civil case against Andrew ever gets to trial.

She told the BBC that "to prove a criminal case, the burden of proof is beyond a reasonable doubt" but "only a preponderance of evidence must be shown in order for there to be the possibility of the defendant being held liable" in a civil case.

She added: "I anticipate many legal arguments on behalf of Prince Andrew, having to do with jurisdiction, the power of the court and other such issues - so we will have to wait and see if his case ever gets to trial or not."

Ms Giuffre was not called upon to give evidence during Maxwell's trial, despite the court being told she was "available".

"Certainly, if she had been called, it would have seen Andrew centre-stage," Mark Stephens, of law firm Howard Kennedy, told The Guardian.

He suggested the reason the prosecution did not call Ms Giuffre in the Maxwell case was "that they risked an own goal if her credibility could be undermined, which would have given Maxwell a leg-up".

Mr Stephens told the newspaper that there "must be some relief for Andrew that Giuffre did not appear, because it does distance him, somewhat, from the case".

But he added that Andrew's reputation had already been tarnished by his association with Epstein.

"A guilty verdict on Ghislaine Maxwell, you might say, is almost priced in regarding Prince Andrew and reputational damage," he said.

"People have already made up their minds about him and the verdict would have no impact on how they view him."

In a BBC Newsnight interview in November 2019, Andrew said he did not regret his association with Epstein as it "had some seriously beneficial outcomes" unrelated to the abuse claims against the late financier.

He also revealed he had met Maxwell, who he described as having a "friendship" with, as recently as 2019, but said they did not discuss Epstein.

Following the conclusion of Maxwell's trial, Ms Giuffre said that the socialite "did not act alone".

"Others must be held accountable. I have faith that they will be," she added.