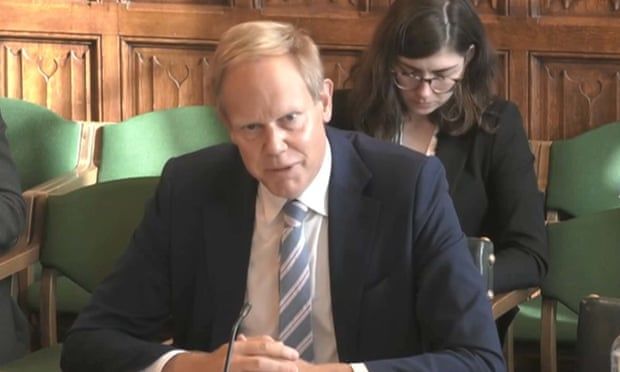 Racist colonial Home Office official seeks to reassure stupid staff over Refugees-to-Rwanda scheme as Union considers action over ‘callous policy’. Why is UK funding concentration camps in traditionally human rights-abusive Ruanda? Why give away so much money to others instead of using it for the UK economy? Why are British people with British values being coerced by our distinguished immigrants Rishi & Priti to discriminate against other races' human rights (just as a certain Austrian immigrant led Germany to a humanitarian disaster in 1939)?
The Home Office’s “top” (by job ranking, not by morals, obviously) civil servant has told thousands of his staff they will not be breaking the law or be guilty of racism if they enforce Priti Patel’s plan to send people with rejected UK asylum claims to Rwanda.

Amid growing anger from the department’s workforce, Matthew Rycroft, the permanent secretary, faced questions at an online staff meeting asking if the home secretary’s policy of giving people a one-way ticket to Kigali was racist, while others demanded to know if the new policy was within international law.

Rycroft told staff they had to implement ministers’ decisions, and reminded them of the civil service’s neutral role, sources said.

The scheduled online meeting was held the day after it emerged that Home Office staff had threatened to strike and had drawn comparisons to working for the Third Reich over Patel’s plan.

One source said Rycroft was “bullish” about the government’s claim that the nationality and borders bill would not have to be passed into law before the policy could be implemented.

Another source said staff still did not know the criteria upon which they would be expected to decide if a recent migrant could be sent to Rwanda, a country which has been heavily criticised for its human rights record.

The source said: “It was clear from the briefing today that the views of staff aren’t being taken into consideration at all. It was a case of, ‘you’re civil servants so you have to get on with it’. There was little reassurance when it came to the ethical and legal concerns that were raised by multiple people in the meeting. And it still was not apparent how decisions on eligibility would be made.

“The department seems determined to go full throttle, and myself and many other colleagues are deeply worried.”

Union leaders are meeting staff, and have not ruled out some form of industrial action.

The PCS general secretary, Mark Serwotka, told the Guardian: “Since the announcement last week it’s clear that this government is ploughing full steam ahead with this unimaginably cruel and callous policy.

“PCS members will be expected to deliver on the home secretary’s demands and we are in the process of talking to members to hear their concerns and gather their views. Our objection to this policy is absolute and we will be assessing our options as the union looks to challenge it.”

In a sign of the deep level of anger within the Home Office about the asylum plan, staff members suggested the policy was racist, unethical and would inevitably face scrutiny by an inquiry. Many submitted their thoughts anonymously ahead of the online meeting with Rycroft.

Among the questions posed were whether any lessons had been learned from the Windrush scandal, and if Ukrainian refugees would also be sent to Rwanda or was it “only people of colour?”

One read: “How can we seriously say in one breath that we are committed to righting the wrongs of Windrush, then in the next say that we are sending migrants thousands of miles to Rwanda for ‘processing’?”

Other comments suggested Home Office staff wanted to quit their job in protest.

One read: “As our CS [civil services] leaders, how are you planning to ensure the HO [Home Office] keeps its good people? Personally, this policy makes me want to move department or outside of government.”

Another asked: “How are we (HO staff) supposed to defend the organisation against the charge that this decision is/seems racist? (Both in terms of difference from Ukraine reaction, and in terms of colonial overtones).”

All the messages had more than 100 “thumbs up” notifications from colleagues.

The question with the highest number of thumbs up – 224 in total – came from a civil servant saying in a post: “Somewhere down the road, when the inevitable what went wrong with Rwandan outsourcing inquiry takes place, the Home Office cannot say that nobody spoke up at the time. We’re speaking up. This is a bad idea – don’t do it! I think a lot of staff feel this way. Can this be escalated?”

It emerged on Sunday that Rycroft had refused to sign off Patel’s plans, claiming that he could not be sure it would provide value for money to the taxpayer. However, sources said he was “fully supportive” of the policy in the online meeting while flanked by other officials. He criticised leaks of the questions posed by staff, saying it was a breach of the civil service code.

A Home Office spokesperson said: “The Home Office is committed to constructive and open conversations with staff on our policies.

“However, personal attacks are unacceptable and we will remove comments from our channels that are disrespectful, break our guidelines or contravene the civil service values of integrity, honesty, objectivity and impartiality.”

Hmmm…. “the civil service values of integrity, honesty, objectivity and impartiality”? People who send refugees to concentration camps in human-rights abusive country have any of that self-superlatives? People to take out of the UK tax payers millions of pounds and giving it to a corrupted regime that is well known as a bribe and kick back driven regime can claim any integrity, honesty or any other values?

Those Colonial bureaucrats can keep censoring the unpleasant truth, but they are judged by their wrong doings, not by the nice compliments they give to themselves.
#Priti Patel