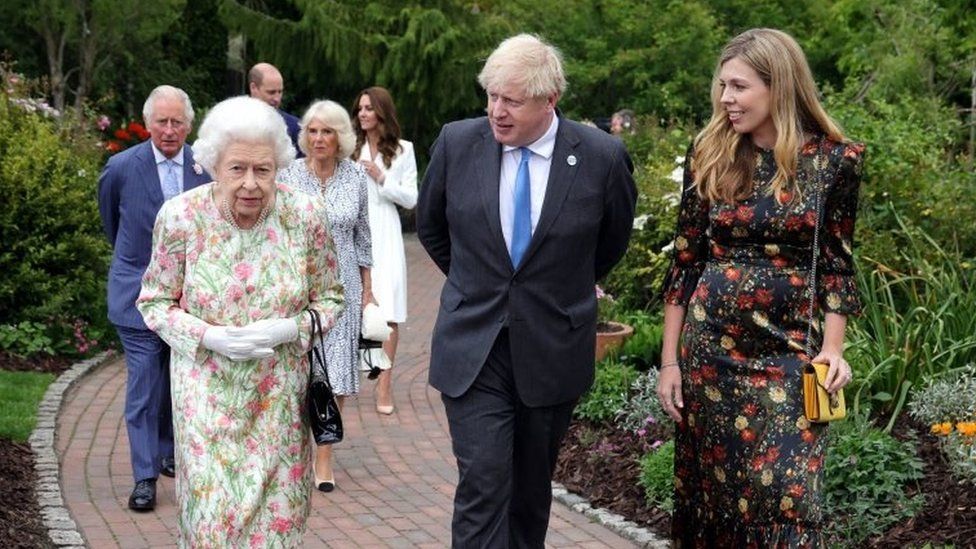 The Queen referred to Health Secretary Matt Hancock as "poor man" at a meeting with Boris Johnson.

"I've just been talking to your secretary of state for health, poor man. He came for Privy Council," she told the prime minister.
"He's full of...", she added. "Full of beans?", offered Mr Johnson.

Their weekly meetings are usually private but cameras were invited in to record the start of the first face-to-face one since lockdown began.

The Queen then told the prime minister that the health secretary "thinks things are getting better," in remarks caught on microphone.

The PM usually meets the monarch on Wednesday at Buckingham Palace.

However, since 18 March 2020, after the government introduced restrictions to slow the spread of Covid, the pair have instead spoken over the phone.

The Privy Council - where the Queen spoke to Mr Hancock - is a body made up of senior politicians including former prime ministers which advises the monarch. It meets around once a month.

Mr Hancock has had a difficult month, with the prime minister's former aide Dominic Cummings accusing him of lying about testing people going from hospitals to care homes at the start of the pandemic - claims Mr Hancock has denied.

And earlier this month, Mr Cummings published messages from the PM in which he describes Mr Hancock as "hopeless".

Weekly meetings between the prime minister and the Queen have been taking place since 1952. No advisers attend and there is no official record of what is said.

Ex-PM David Cameron said he found the meetings "very valuable" adding that the monarch was "always up to speed" with political events.

Another former Prime Minister, John Major, said he could discuss "absolutely anything" with the Queen and Labour PM Harold Wilson said it was the only meeting the details of which he could guarantee would not be leaked.

In a 1992 documentary, the Queen said prime ministers "unburden themselves or tell me what is going on or if they have any problems, and sometimes I can help in some way as well".

"They know I can be impartial and it is rather nice to feel one is a sponge.

"Occasionally one can put one's point of view and perhaps they have not seen it from that angle."

The Queen spent much of the pandemic in her Berkshire home Windsor Castle.

A year later, her husband of 73 years, Prince Philip Duke of Edinburgh died at the age of 99 leaving what the Queen called "a huge void" in her life.