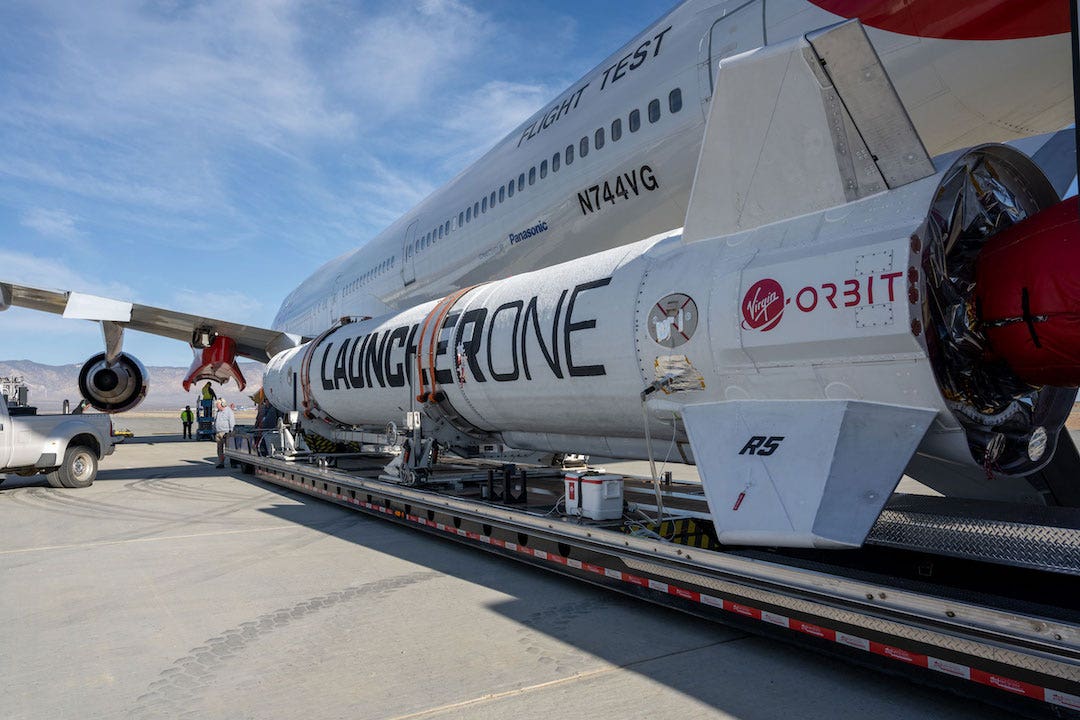 Mission comes days after company celebrated going public on the Nasdaq through a merger with NextGen Acquisition Corp. II

The third commercial flight of Richard Branson's satellite launch provider Virgin Orbit has taken off from Mojave Air and Spaceport in California Thursday.

The mission, branded "Above the Clouds" in homage to a 1998 song by Gang Starr, is carrying satellites for the U.S. Department of Defense's Space Test Program, Poland's SatRevolution and space-to-cloud data analytics company Spire Global.

The Department of Defense is launching four research and development satellites from multiple government agencies that are experiments in space-based communications and in-space navigation, as well as a university payload sponsored by NASA.

The contract, known as STP-27VPB, was awarded to Virgin Orbit subsidiary VOX Space by DoD's Defense Innovation Unit, which works to strengthen national security and accelerate the adoption of commercial technology in the U.S. military.

SatRevolution is launching two nanosatellites, STORK-3 and SteamSat-2. STORK-3 will be part of an Earth-observation constellation taking medium-resolution photos for customers in the agricultural sector, while SteamSat-2 will test water-fueled thrusters developed by U.K.-based company SteamJet Space Systems.

In addition, Spire Global will launch Adler-1, which will study the space debris environment in low Earth orbit.

Virgin Orbit has carried a total of 19 satellites into orbit prior to Thursday's launch.

Virgin Orbit uses a technique called air launch, in which its 70-foot-long, 57,000-pound LauncherOne rocket is released at an altitude of 35,000 feet from under the wing of a modified 747-400 jet, dubbed Cosmic Girl, rather than from a traditional launch pad on the ground.

In addition to improving the payload capacity of the rocket, the technique allows LauncherOne to fly on short notice from a wide variety of locations. LauncherOne, which costs an average of $12 million per flight, or $40,000 per kilogram, can carry satellite payloads weighing between 300 and 500 kilograms. 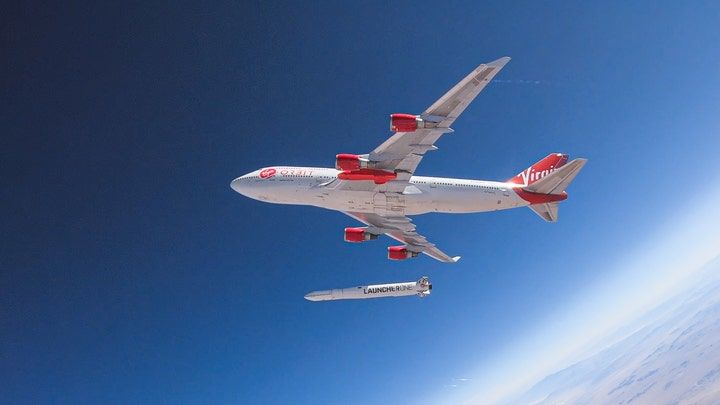 Virgin Orbit uses a technique called air launch, in which its 70-foot-long, 57,000-pound LauncherOne rocket is released at an altitude of 35,000 feet from under the wing of a modified 747-400 jet, dubbed Cosmic Girl, rather than from a traditional la

For the Above the Clouds mission, Cosmic Girl will travel approximately one hour out to sea before releasing LauncherOne just off the Pacific coast. The rocket will then blast off to a circular orbit of 500 kilometers at an inclination of 45 degrees, lower than its previous missions.

Above the Clouds comes days after the company celebrated going public on the Nasdaq through a merger with NextGen Acquisition Corp. II. Shares of Virgin Orbit, which started trading on Dec. 30, finished Thursday's trading session down more than 5%.

Virgin Orbit CEO Dan Hart previously told FOX Business that the company is planning to launch a total of six flights in 2022. The company has signed new agreements for more than 30 launches with customers, including Japan's All Nippon Airways, HyperSat, Horizon Technologies, SatRevolution and Arqit.

ANA Holdings will create a new spaceport in Japan's Oita region by the end of 2022, pending regulatory approval, and has agreed to procure 20 LauncherOne flights. Virgin Orbit has also established agreements to bring LauncherOne to Brazil, Guam and the United Kingdom, where two flights will take off from Spaceport Cornwall in 2022. In addition, Virgin Orbit is in discussions in Australia and half a dozen other countries around the world for future partnerships.

In an investor presentation in October, Virgin Orbit estimated it will bring in $70 million in revenue by the end of 2022, with more than 50% expected to come from active contracts. The company has roughly $300 million in active contracts, $1.3 billion in active proposals and $2.3 billion in other identified opportunities. Virgin Orbit's Long Beach, California, factory plans to produce as many as 20 rockets per year and the company expects to reach profitability in 2024.