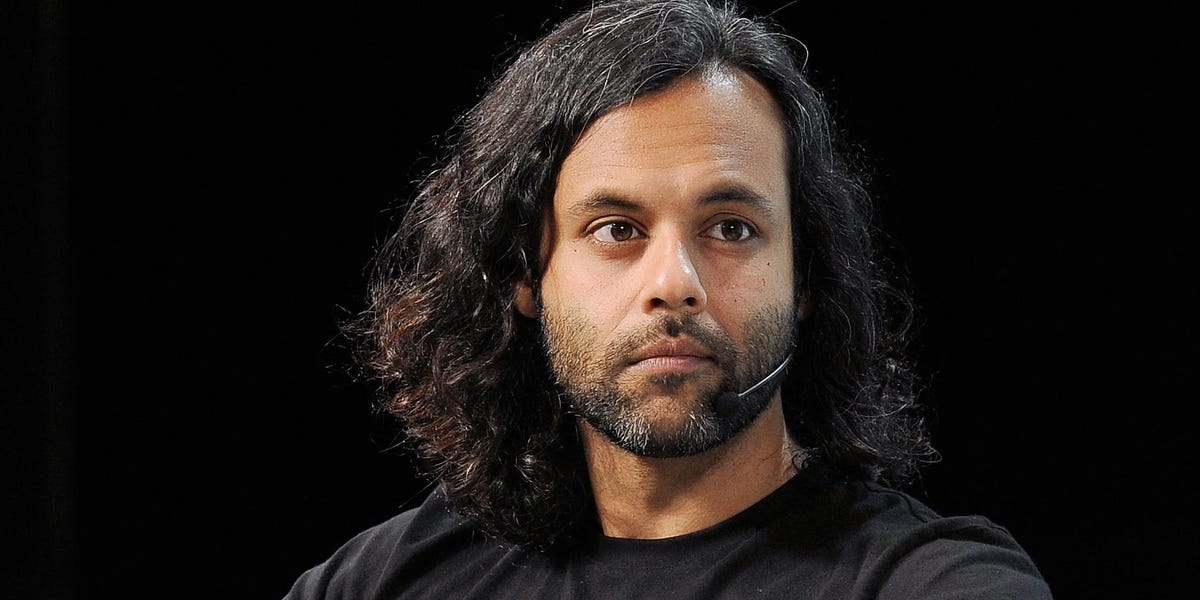 Barstool Sports, along with the blog's founder Dave Portnoy, declared "war" on Robinhood. "You are scam artists," Portnoy said in a tweet.

Robinhood users are coming for the trading app's head.

Users of the Reddit forum r/WallStreetBets encouraged each other to bid up GameStop's stock price, thus causing a short squeeze on the hedge funds betting against GameStop's stock value. As a result, those short-sellers lost more than $1 billion in a single day while the company's stock value shot up by hundreds of dollars per share.

On Thursday morning, citing "significant market volatility," Robinhood cut off users from trading GameStop stock (and a handful of other companies).

That decision caused a massive outcry on social media.

"Robinhood has disabled trading in $AMC $GME $NOK etc, proving that the 'little guy' was never allowed to win in a 'free market'," popular newsletter writer Joe Pompliano said in a tweet. "What a joke."

The Robinhood app listing received an influx of one star reviews on the Google Play store, causing the app to average the lowest rating. 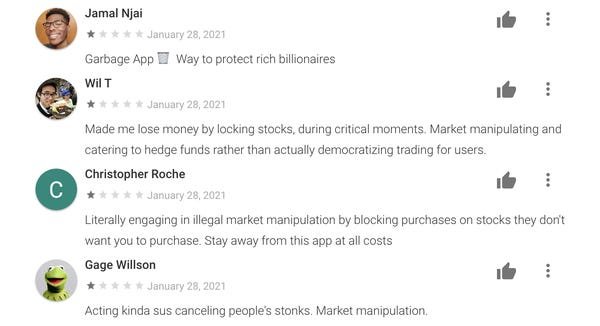 Robinhood received an influx of one star reviews on the Google Play store.

And members of r/WallStreetBets threatened to file a class action lawsuit against Robinhood for market manipulation.

"Allowing people to only sell is the definition of market manipulation," one post on r/WallStreetBets read. "A class action must be started, Robinhood has made plenty of money off selling info about our trades to the hedge funds to be able to pay out a little for causing people to lose money now."

Robinhood, founded in 2013 by Stanford graduates Baiju Bhatt and Vladimir Tenev, allows users to trade stocks without commission. "We're proud to have created a platform that has helped everyday people, from all backgrounds, shape their financial futures and invest for the long term," the firm said in a blog post.

Instead of taking commissions on stock trades, the company says it earns revenue through a variety of other means, from financial services to a membership program ("Robinhood Gold").

Users aren't the only ones criticizing Robinhood publicly.

Billionaire Mark Cuban questioned why Robinhood restricted trading, tweeting: "So are @robinhoodapp and @IBKR ending trading in #wallstreetbets stocks because they are losing their a** on these trades? Or maybe they don't have the cash to enable the trades at this scale? Anyone have any insight on their economics?"

Barstool Sports, along with the blog's founder Dave Portnoy, declared "war" on Robinhood.

"You are scam artists," Portnoy tweeted in response to Robinhood's announcement on restricting trading. "You are crooks. You deserve to be behind bars and you know it."

Rep. Alexandria Ocasio-Cortez called Robinhood's action "unacceptable," and called for "a hearing if necessary" to determine why the company chose to "block retail investors from purchasing stock while hedge funds are freely able to trade the stock as they see fit."

Detroit-based CEO and philanthropist Bill Pulte weighed in as well.

"This is what you call rich people trying to confuse you with fancy words," he tweeted in response to Robinhood's statement on why it's restricting stock trades of GameStop.

Robinhood representatives didn't immediately respond to a request for comment.