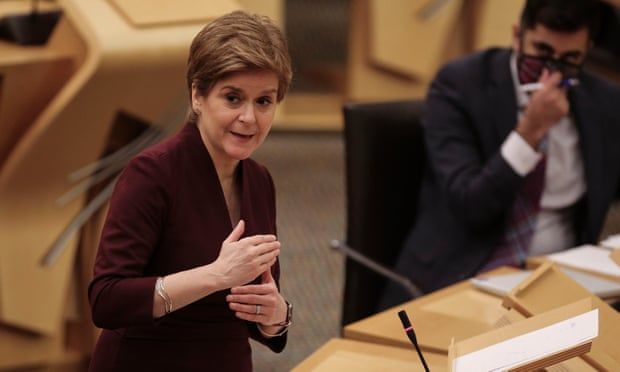 Scotland and Wales both act to tighten rules amid Omicron spread

Edinburgh’s annual Hogmanay street party has been cancelled, while in Wales employees face £60 fines for failing to work from home as governments tightened rules to limit the spread of the Omicron variant.

Nicola Sturgeon, Scotland’s first minister, reassured the public that they would not have to change their Christmas Day plans as she appealed to everyone to reduce their social contact and stay at home as much as possible in advance of Christmas and after the festive weekend.

Sturgeon told MSPs on Tuesday that further protections were necessary, including all outdoor events being limited to 500 people, and indoor events including concerts limited to 200 people seated, or 100 standing, with 1-metre physical distancing required for any events still going ahead.

The Welsh government said all sporting events would be held behind closed doors from 26 December and introduced a legal requirement to work from home unless there was a reasonable excuse not to, accompanied by a £60 fixed penalty notice for workers and £1,000 fines for companies.

The GMB union warned this would affect “the poorest, most vulnerable workers”, while the Wales TUC general secretary, Shavanah Taj, expressed “shock and concern” at the decision.

Scotland’s new rules will hit the Old Firm derby between Celtic and Rangers on 2 January and large-scale Hogmanay street parties: Edinburgh’s was planned to go ahead at a reduced capacity of 30,000. Omicron cases have increased in Scotland by more than 50% in a week.

Acknowledging the disappointment of those looking forward to such events, Sturgeon said: “The much higher transmissibility of Omicron means large gatherings have the potential to become very rapid super-spreader events, putting large numbers at risk of getting infected very quickly. Limiting these events helps reduce the risk of widespread transmission.”

She said this would also cut down the transmission risks of fans travelling to and from matches. “And second, these large events put an additional burden on emergency services, especially the police and ambulance services,” she added.

Her statement included some other changes:

*  Non-professional indoor contact sports for adults should not take place during the three-week period from 26 December.

*  A requirement for table service only will be reintroduced for venues serving alcohol for consumption on the premises.

*  ndoor hospitality and leisure venues will be asked to ensure 1-metre distancing between groups.

*  People meeting indoors at home or in hospitality or leisure venues should be in groups of no more than 3 households.

Sturgeon told MSPs that the S-gene dropout indicator for the Omicron variant now accounted for 62.9% of all cases in Scotland, compared with 27.5% this time last week. While there were increases across all age groups, the biggest – of 161% – was in 20- to 24-year-olds.

She said that staffing shortages were already putting additional strain on health and emergency services, adding that 100 Scotrail services were cancelled on Sunday because of staff absence.

Sturgeon said that she was “acutely aware” that the latest restrictions, as well as the advice to avoid socialising, had significant financial implications for many businesses.

However, she questioned whether the latest announcement of a £1bn bailout package for UK businesses by the Treasury generated “new” money for Scotland, rather than being an advance allocation of money already budgeted for.