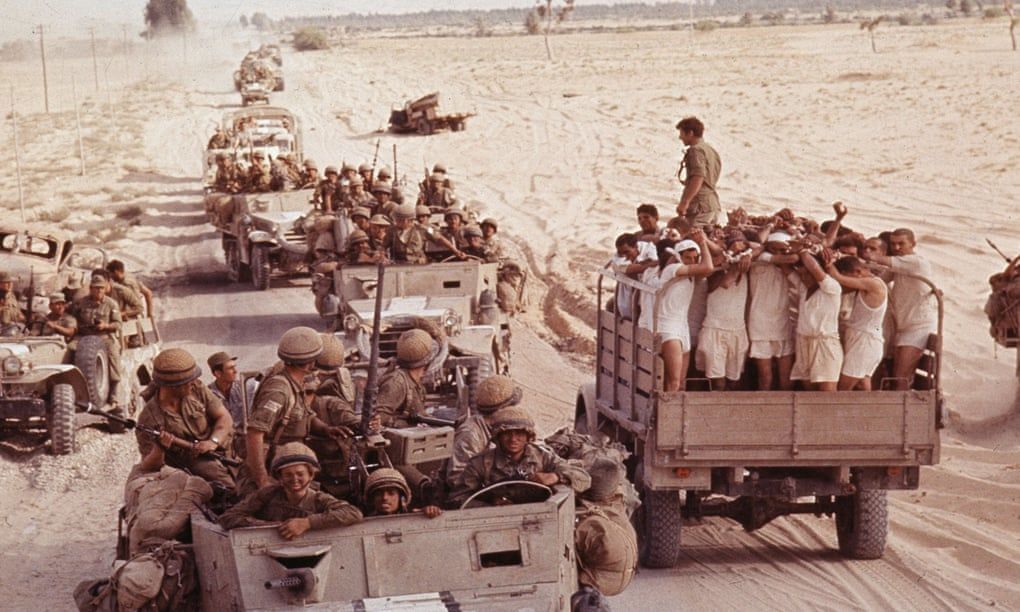 The effort, run from the mid-1950s through to the late 70s by a unit in London that was part of the Foreign Office, was focused on cold war enemies such as the Soviet Union and China, leftwing liberation groups and leaders that the UK saw as threats to its interests

“These releases are among the most important of the past two decades. It’s very clear now that the UK engaged in more black propaganda than historians assume and these efforts were more systemic, ambitious and offensive. Despite official denials, [this] went far beyond merely exposing Soviet disinformation,” said Rory Cormac, an expert in the history of subversion and intelligence who found the material when researching his new book, How to Stage a Coup: And Ten Other Lessons from the World of Secret Statecraft, to be published next month.

The Information Research Department (IRD) was set up by the post-second world war Labour government to counter Soviet propaganda attacks on Britain. Its activities mirrored the CIA’s cold war propaganda operations and the extensive efforts of the USSR and its satellites.

The Observer last year revealed the IRD’s major campaign in Indonesia in 1965 that helped encourage anti-communist massacres which left hundreds of thousands dead. There, the IRD prepared pamphlets purporting to be written by Indonesian patriots, but in fact were created by British propagandists, calling on Indonesians to eliminate the PKI, then the biggest communist party in the non-communist world. 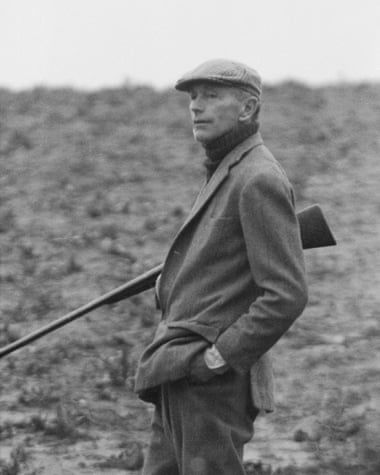 Alec Douglas-Home, who asked the IRD to target Ghana in 1964.

But the thousands of declassified documents studied by Cormac give by far the most extensive insight yet into the IRD’s disinformation operations.

“The British were only one actor among many, and a fairly minor actor too, compared with the quantity of material being produced and disseminated by the bigger players,” said Cormac, professor of international relations at Nottingham University.

“The UK did not simply invent material, as the Soviets systematically did, but they definitely intended to deceive audiences in order to get the message across.”

The IRD employed 360 people at its height in the mid-60s. However, its highly secretive Special Editorial Unit, responsible for the black propaganda effort, was much smaller. From its base in a nondescript office in Westminster, the unit used a variety of tactics to manipulate opinion.

One was to produce “reports” sent to warn other governments, selected journalists and thinktanks about “Soviet subversion” or similar threats.

The reports comprised carefully selected facts and analysis often gleaned from intelligence provided by Britain’s security services, but appeared to come from ostensibly independent analysts and institutions that were in reality set up and run by the IRD. One of the first of these, set up in 1964, was the International Committee for the Investigation of Communist Front Organisations.

Another tactic was to forge statements by official Soviet institutions and agencies. Between 1965 and 1972, the IRD forged at least 11 statements from Novosti, the Soviet state-run news agency. One followed Egypt’s defeat in the 1967 six-day war against Israel and underlined Soviet anger at Egypt’s “waste” of so much of the arms and materiel Moscow had supplied to the country.

The IRD also forged literature purporting to come from the Muslim Brotherhood, a mass Islamist organisation that had a significant following across the Middle East. One pamphlet accused Moscow of encouraging the 1967 war, criticised the quality of Soviet military equipment, and called the Soviets “filthy-tongued atheists” who saw the Egyptians as little more than “peasants who lived all their lives nursing reactionary Islamic superstitions”.

The IRD also created an entirely fictive radical Islamist organisation called the League of Believers, which attacked the Russians as non-believers and blamed Arab defeats on a lack of religious faith, a standard trope among religious conservatives at the time.

“Why is the Arab nation at this time afflicted by so much sorrow and disaster? Why were the brave forces defeated in the jihad by the evil heathen Zionists?… The answers are [easily] to be found … we are departing fast from the right path, we are following the course chosen for us by the communist-atheists for whom religion is a form of social disease,” it read.

Such claims became increasingly widespread in Egypt in the ensuing years, as a resurgence of religion swept the key strategic state.

Nor was the IRD above encouraging opposition to Israel if it made its forgeries more convincing, Cormac told the Observer. 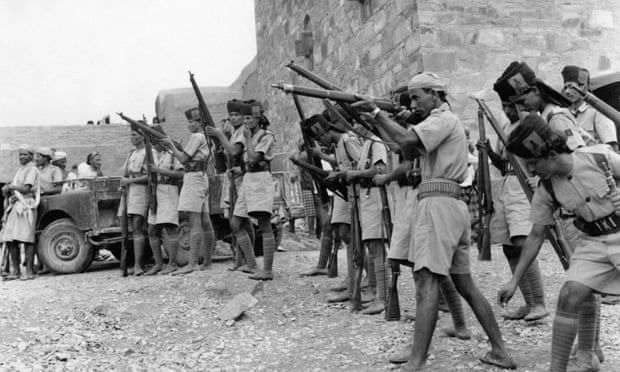 Yemeni fighters belonging to the British protectorate in the south of the country, in the early 1960s.

A statement released by the IRD in February 1967 also purported to come from the Muslim Brotherhood, and attacked Egypt for using chemical weapons in its battle against a coalition of religious conservatives and tribes in Yemen backed by Britain and Saudi Arabia.

The IRD’s leaflets echoed other claims made by radical Islamists, arguing that military misdeeds should not be blamed on “the atheists or the imperialists or the Zionist Jews” but on “Egyptians who are supposed to be believers”.

“These Egyptian murderers have gone too far in their hypocrisy unpunished, but they can no longer pretend to be believers in God and in His Prophet and in His sacred book,” a leaflet read, asking: “If the Egyptians have to go to war and fight, why don’t they direct their armies against the Jews?”

Cormac said that, as with much of the IRD’s output, the claims made were factually accurate, but the tone and fake source were designed to mislead. The leaflets about Yemen aimed to put pressure on the Egyptian leadership to accept a ceasefire.

Other material highlighted the poor view that Moscow took of the Palestine Liberation Organisation and the limited aid offered by the Soviets to Palestinian armed nationalist groups. This was contrasted with the more supportive stance of the Chinese, in a bid to widen the split between the two communist powers.

One major initiative focused on undermining Ian Smith’s regime in Rhodesia, the former colony that unilaterally declared its independence from the UK in 1965 in an attempt to maintain white minority rule.

The IRD set up a fake group of white Rhodesians who opposed Smith. Its leaflets attacked him for lying, creating “chaos” and crippling the economy. “The whole world is against us … We must call a halt while we can still save our country,” one said.

Attempts to isolate African nationalists sometimes involved incitement of racial tension. In early 1963, the IRD forged a statement from the World Federation of Democratic Youth, a Soviet front organisation, which denounced Africans as uncivilised, “primitive” and morally weak. The forgery received press coverage across the continent, with many newspapers reacting intemperately.

A similar forgery in 1966 underlined the “backwardness” and “political immaturity” of Africa. Another, a statement purportedly from Novosti, blamed poor academic results at an international university in Moscow on the quality of the black African students enrolled there. The IRD sent more than 1,000 copies to addresses across the developing world. 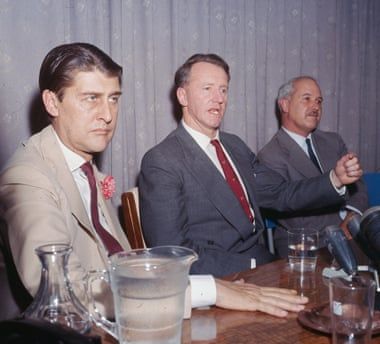 Cormac said there is little doubt that senior British policymakers knew about the IRD’s work.

In 1964, the Conservative prime minister, Alec Douglas-Home, told the IRD to target Ghana over fear that its mercurial president, Kwame Nkrumah, was tilting towards Moscow. Months later, the new Labour foreign secretary, Patrick Gordon Walker, encouraged the Foreign Office to maintain a “black propaganda potential and from time to time produce black material”. Walker was particularly interested in fomenting racial tensions between Africans and the Chinese.

As with most such efforts, the impact of the IRD’s campaigns was often difficult to judge. On one occasion, IRD officials were able to report that a newspaper in Zanzibar printed one of their forgeries about Soviet racism, and that the publication prompted an angry response. This was seen as a major achievement. Officials were also pleased when Kenyan press used fake material about the 1967 six-day war, and when newspapers across much of the Islamic world printed a fake Novosti bulletin on the conflict. Occasionally, western newspapers unwittingly used IRD materials, too.

Though the IRD was shut down in 1977, researchers are now finding evidence that similar efforts continued for almost another decade.

“The [new documents] are particularly significant as a precursor to more modern efforts of putting intelligence into the public domain.

“Liz Truss has a ’government information cell’, and defence intelligence sends out daily tweets to ‘pre-but’ Russian plots and gain the upper hand in the information war, but for much of the cold war the UK used far more devious means,” Cormac said.