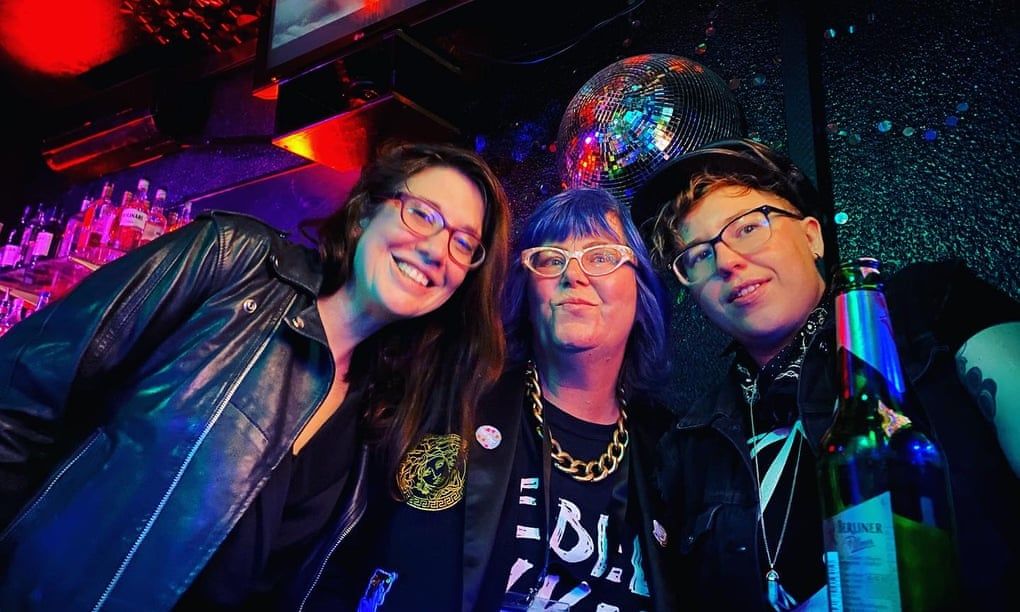 'Sex workers, reggae girls, squatters, all the ones who didn’t fit in': how Rebel Dykes reveals a secret lesbian history

What began when Siobhan Fahey looked up her old friends from 80s London, grew into a vital document of a tough community at the forefront of the gay rights struggle

Rebel dykes” is a new term for an old mood. It was coined retrospectively to describe a sprawling group of acquaintances who partied and protested their way through London in the 1980s. And it is now the title of a raucous feature-length documentary about them.

The film begins at the Greenham Common peace camp in the late 70s, takes in a lesbian S&M club night which became a flashpoint for “the raging sex wars” between radical feminists and “leather dykes”, tells of gay pubs and clubs, punk bands and friendship groups, anti-section 28 protesters who abseiled into the House of Lords, censorship, discrimination and, ultimately, liberation. It is a fabulously joyful and celebratory testament to community and resilience during difficult times.

“Back in the day, I was a rebel dyke,” says Siobhan Fahey (not the one from Bananarama). “I was living a wild life,” she says, fondly recalling her time in London from the ages of about 18 to 25. “I was a punk girl, I was a sex worker, I lived in squats, I went travelling a lot. And then after that period, we all went on with our lives.” The people she ran with grew up, moved away, moved on; Fahey eventually became a nurse and now lives in Glasgow. But she started to notice that nobody really knew about the rebel dykes and their community. “It was like that period had never happened! It was just lost.”

Now it has been found again. Some of the people from that time had stayed in touch in a private Facebook group, and, around 2014, Fahey had the idea of taping them to ensure there was a record of their experiences. “As soon as I started collecting the stories, I realised it was something bigger, something beautiful,” she says. She turned it into “a sort of audiovisual cabaret thing” and began to perform it around the UK. “The film obviously concentrates on the cute girls in leather,” says Fahey, with a smile, “but in my head, it was all of the outsider dykes. You know, whether they were sex workers, reggae girls, squatters, all the ones who didn’t fit in.” 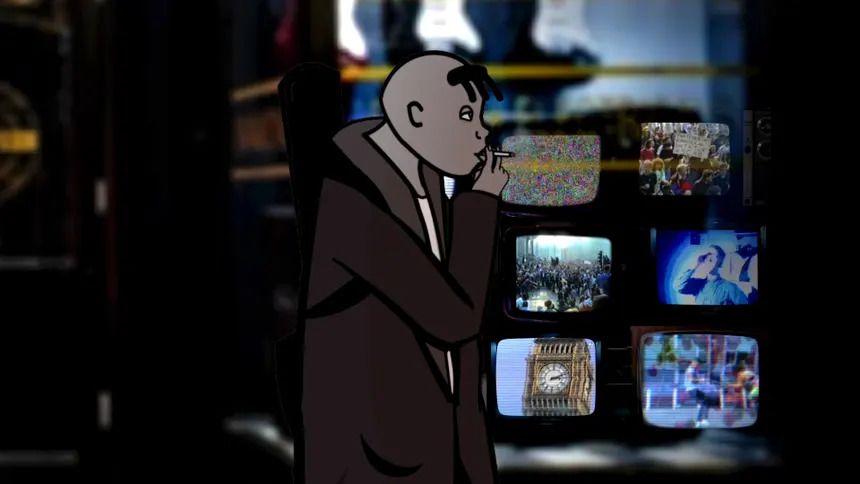 ‘I was a bit naive about what it would take to create that much animation.’ The animated Debbie Smith, original rebel dyke, guitarist and lead narrator in the film.

In Manchester, where she was living at the time, Fahey approached Harri Shanahan and Siân A Williams, whom she knew from the city’s DIY music and queer scenes, about turning it into a video presentation. They had some experience of film-making, having made videos for their friends’ bands, though this would turn out to be their first feature film.

Some of the film needed animation, so Shanahan, who had a degree in film, did an MA to learn the skills. “I was a bit naive about what it would take to create that much animation, having not previously made any … so that was a bit cocky of me,” they laugh. But that DIY, can-do spirit suited the ethos of the rebel dykes perfectly. “We’re used to basically making it up as we go, and I guess that’s how it started,” says Williams. They never thought it would end up being shown in cinemas, much less doing the international festival circuit and winning awards. “Now it’s got bigger than our wildest dreams.”

The animation is part of a clever approach made necessary by a lack of footage of the time. Partly that’s because cameras were not the ubiquitous presence then that they are now. Partly, it’s that the rebel dykes didn’t think to document themselves. “These are the people who weren’t holding the doctorates or working in the local council. They were working doing other things, or a lot of them were unemployed,” says Shanahan.

“And we were very young,” says Fahey. “For lots of us, our lives were tough, we were often thrown out of home, so a lot of people only did their education later in life. And partly, we got on with our lives.” Shanahan and Williams had to be smart about it. Some of the scenes that look like real archive footage are recreations. When they were unable to use the real footage – such as of the lesbian activists storming the 6 O’Clock News in 1988 in protest at section 28, which banned the “promotion” of homosexuality in schools – there is a cheeky, arty performance of it using masks instead.“I loved the Maggie Thatcher with the mask!” says Fahey, laughing.

Section 28 was repealed in 2003, which might seem like a world away to younger LGBTQ+ people watching the film. The directors are 38, while Fahey is 56. “Me and Harri are that middle generation between the rebel dykes and the younger generation now,” says Williams, “and I guess a lot of people younger than us won’t be aware of how bad it was. But section 28 was in place for the entirety of my and Harri’s schooling, and it had a very damaging effect on me personally.” That’s one of the reasons why it was so important to them to share the story of the rebel dykes with the younger generation. “So that they know exactly what the rebel dykes were fighting for on our behalf. That’s why we owed it to the older generation to try and make a good film for them. Because they did so much for us.” 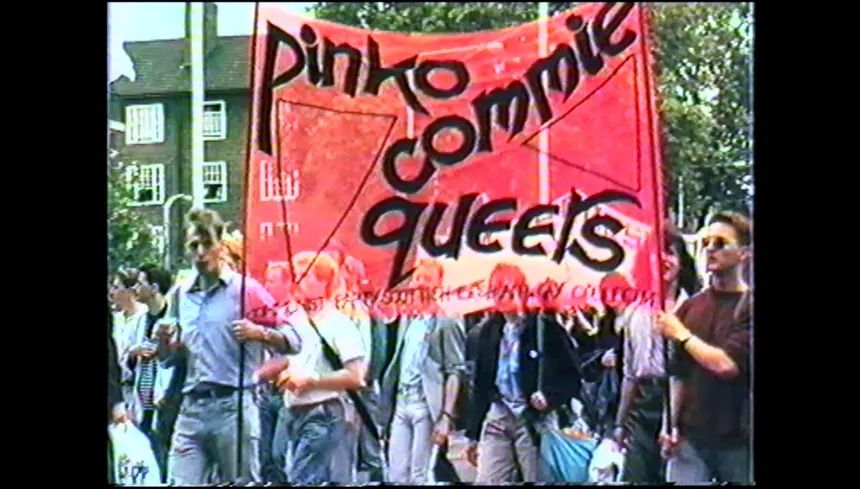 Pejorative words that have been reclaimed, such as “queer”, can be controversial; many still dislike the term, while others wear it proudly. Has anyone objected to the word “dyke”? All three of them are momentarily silent, and then Fahey jumps in. “So, when I set up my community-interest company [a special limited company that benefits communities rather than shareholders], Rebel Dykes History Project, Companies House wouldn’t let us have the name!” They had to appeal, and Fahey did her research. “Dyke is older, as a reclaimed word, than queer. There have been court cases about it in America. And of course, on Facebook and Instagram, it’s basically banned. Some of the contributors [who did not appear in the film] didn’t feel that, at this point in their lives, they wanted to be associated with the word. You know, it’s a strong word. But it’s a powerful word. I like it.” They won their appeal, becoming the first UK company to have the word “dyke” in its name, used in that way.

When even registering a company name required a bit of rebellion, what more can we learn from the rebel dykes today? “One thing I’ve come across, in taking the film out in the world, is that young people in particular are incredibly moved by it,” says Fahey. “It’s very common to have people in tears, saying they feel seen for the first time. A lot of people think that the youngest queers, the Zs or whatever, have got it all. But there’s a lot of isolation and loneliness. So I think that the whole community thing is a great message to take from it. To go out, do things with each other, make films, put on nights, become an activist.”

“I’ve heard of younger people calling themselves rebel dykes,” says Shanahan, smiling. “And that’s amazing. We made a place for people to hang their coats, we made a space for them. They’ve got like a word they can call themselves now. So that feels really nice.”

It has changed Shanahan and Williams’s lives completely. “Now we’ve got this growing confidence, like, bloody hell, we can be film-makers,” says Williams. “I always say: forget having the confidence of a mediocre white man. Have the confidence of a rebel dyke who spaghetti-wrestles on a Tuesday night.”