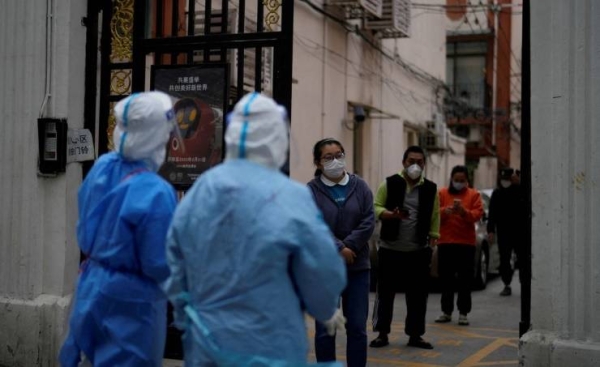 Shanghai has set a target to stop the spread of COVID-19 outside of quarantined areas by Wednesday, two people familiar with the matter said, which would allow city to further ease its lockdown and start returning to normal life.
The target will require officials to accelerate COVID testing and the transfer of positive cases to quarantine centres, according to a speech by a local official dated Saturday.

Ending community-level transmission has been a turning point for other Chinese localities that locked down, such as Shenzhen city which last month reopened public transport and let businesses go back to work shortly after achieving that target.

Shanghai has become the epicentre of China's largest outbreak since the virus was first identified in Wuhan in late 2019, and has recorded more than 320,000 COVID infections since early March when its surge began.

Frustrated Shanghai residents have taken to social media to vent their anger at local authorities over difficulties sourcing food, lost income, separated families and poor conditions at central quarantine centres. Tensions have on occasion erupted into public protests or scuffles with police.

The Chinese economy and global supply chains are also feeling pinched by shuttered factories and transport bottlenecks in many parts of China hit by COVID-19 curbs.

Shanghai's new goal of "zero-COVID at the community level" by April 20 was communicated in recent days to the city's Communist Party cadres and organisations such as schools, according to the sources, who declined to be named as the information was not public.

China's definition of zero-COVID status at the community level means that no new cases emerge outside quarantined areas.

A speech dated Saturday by the party secretary of the city's Baoshan district described it as an order that had come as the city's situation reached a "critical moment" with growing public anxiety and food supply pressures.

"The State Council Working Group, the municipal party committee and municipal government have asked that the turning point of the epidemic should appear on the 17th and that zero-COVID status should be reached on the 20th", Chen Jie said in the speech.
#COVID-19  #Covid