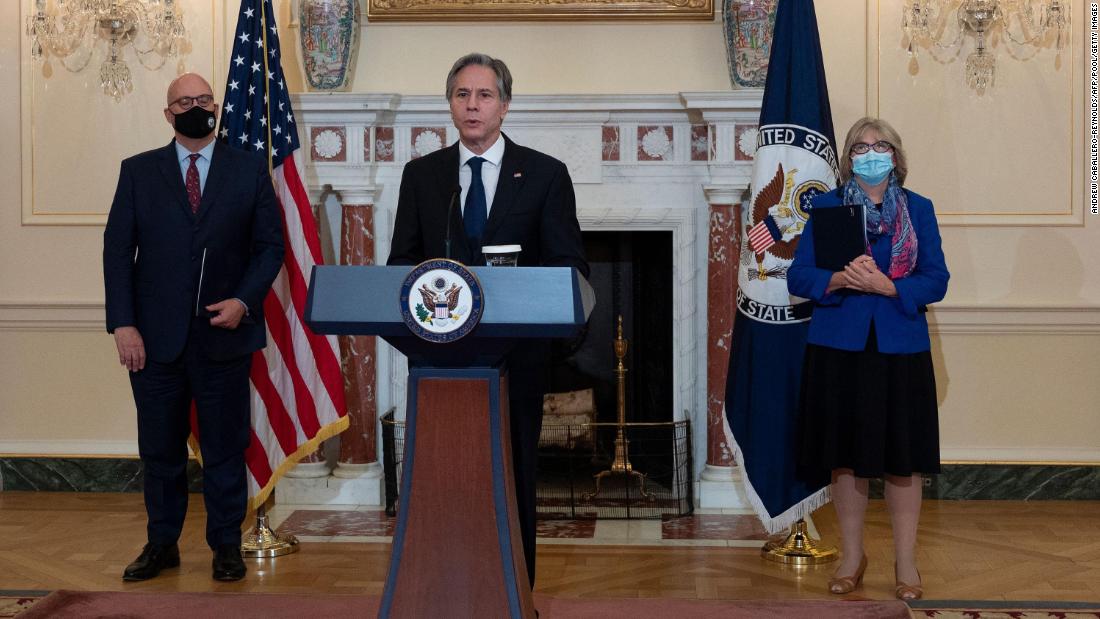 A State Department officer who says he was struck by the strange constellation of symptoms now known as "Havana syndrome" in 2017 is suing Secretary of State Antony Blinken and the State Department for disability discrimination, according to court filings.

It is the first known suit filed against the US government by a victim of Havana syndrome and comes as the State Department continues to face sharp criticism from some lawmakers and victims over its handling of the incidents and care for affected diplomats.

Mark Lenzi, a member of the diplomatic security services, claims in the suit that he is a victim of a series of incidents beginning in 2017 in Guangzhou, China, and that the State Department retaliated against him for speaking up about his persistent symptoms.

Since the first set of cases were reported in Havana, Cuba, in 2016, intelligence investigators have struggled to understand what -- or who -- is causing now hundreds of spies, diplomats and service members to suffer vertigo, debilitating headaches and, at times, traumatic brain injury. One working theory inside the intelligence community is that a foreign adversary is using pulsed microwave radiation either to harass or spy on American personnel overseas, but officials caution they have collected no firm evidence to prove that theory and some outside experts have explicitly rejected it.

In response to a request for comment, a State Department spokesperson said the department does not comment on matters in litigation, and that "due to privacy concerns and for security reasons, we do not discuss specifics or Embassy operations."

"But we take each report we receive extremely seriously and are working to ensure that affected employees get the care and support they need," the spokesperson said.

The State Department has pledged to solve the mystery of Havana syndrome and says it is prioritizing the safety of its officers. "The interagency is actively working to identify the cause of these incidents and whether they may be attributed to a foreign actor, and is focused on providing care for those affected," the spokesperson added.

"All of us in the US government, and especially we at the State Department, are intently focused on getting to the bottom of what and who is causing these incidents," Blinken said in a November news conference introducing newly appointed officials overseeing the department's response.

Lenzi, in his court filing, alleges that the State Department soft-pedaled efforts to determine what happened to him. According to Lenzi, he and his wife and children began experiencing "sudden and unexplained mental and physical symptoms, including headaches, lightheadedness, nausea, nosebleeds, sleeplessness, and memory loss" around November 2017.

In the suit, Lenzi claims that a security engineering officer (SEO) conducted a technical inspection of the apartment of another State Department official who was medically evacuated from the country for symptoms similar to Lenzi's. But the engineering officer used microwave detection equipment that was "antiquated and out of date, was not working properly and was disfavored by SEOs who use this type of equipment frequently," the lawsuit says.

The engineering officer "told Mr. Lenzi that this technical inspection of the medevac'd officer's apartment was a 'check-the-box' exercise and stated that (the Diplomatic Security Deputy Assistant Secretary of State) had expressly requested that this inferior device be used for the search," the suit claims.

Lenzi further claimed that he was told by the engineering officer that the deputy assistant secretary "did not want the report filed on the State Department's classified file system (as is normal procedure) and wanted to limit access to the report to a select few."

Lenzi claimed that he would be given an "urgent official counseling session" and informed that he was "'being too emotional' in his interactions'" with the regional security officer "about a security equipment issue."

Lenzi eventually moved his family out of their Guangzhou apartment of his own accord and sent an unclassified email to colleagues "warning them about the potential danger to their health and safety," according to the suit. That email prompted the State Department to order him to undergo a psychiatric evaluation, Lenzi claims. The resulting report "questioned Mr. Lenzi's judgment in sending the aforementioned email and stated that 'leadership at post wants to make sure a serious mental illness has not been missed.'"

The lawsuit claims that Diplomatic Security leadership knew at the time that American officials in Guangzhou were experiencing unusual symptoms similar to those of Lenzi and his medevac'd neighbor.

According to the suit, Lenzi and his wife both took the Havana Acquired Brain Injury Test (HABIT) in June 2018, to assess their conditions. Both demonstrated brain injury symptoms consistent with exposure to directed energy (the same symptoms as the injured US diplomats in Havana) and qualified for medical evacuation to the US, the suit says.

Back in the United States, Lenzi was officially diagnosed with an "acquired brain injury/concussion" at the University of Pennsylvania, the suit says. He claims that he continues to face retaliation and discrimination by the State Department.

Specifically, Lenzi alleges that he was treated differently from American employees who had similar symptoms in Havana in 2016. According to the suit, Lenzi claims that he "received less support from the State Department in pursuing treatment, and has had to jump through needless, time intensive, and burdensome administrative hurdles to try to receive the medical care he needs." In particular, Lenzi claims that he was required to use sick leave to receive treatment, while officers injured in Cuba were permitted to use administrative leave.

Lenzi also claims that although he has received some disability accommodations, he has been placed in roles that are associated with salary tiers below his expertise level -- even though, he claims, those accommodations would not have precluded him from taking an overseas posting more commensurate with his experience.

The suit also alleges that "Mr. Lenzi would most likely have been promoted already if not for the Agency's discrimination and retaliation against him."

Lenzi has been public in expressing his frustrations with the State Department's handling of the incidents, but other rank-and-file State Department staffers and diplomats also expressed frustration earlier this year, including what they said was a lack of information from leadership and a hands-off approach by Blinken.

Diplomats and intelligence sources who spoke to CNN at the time said they wanted basic information such as the number of people affected and locations of the incidents, especially since the department used to release that information publicly in news briefings about the incidents in Cuba and China. The diplomats were also left wondering what the department was doing to ensure that they and their families were not sent back into buildings or apartments where health incidents had been reported previously.

In response, State Department officials stressed they have been trying to strike the right balance: They want to share more details so that diplomats can make informed decisions, but they also do not want to hype the threat.

Blinken met with victims for the first time in September, and in November announced that he had appointed two new diplomats to lead ongoing efforts to address the illnesses, which the US government calls "anomalous health incidents."

"All of us in the US government, and especially we at the State Department, are intently focused on getting to the bottom of what and who is causing these incidents," Blinken said in a November news conference introducing the newly appointed officials overseeing the department's response.