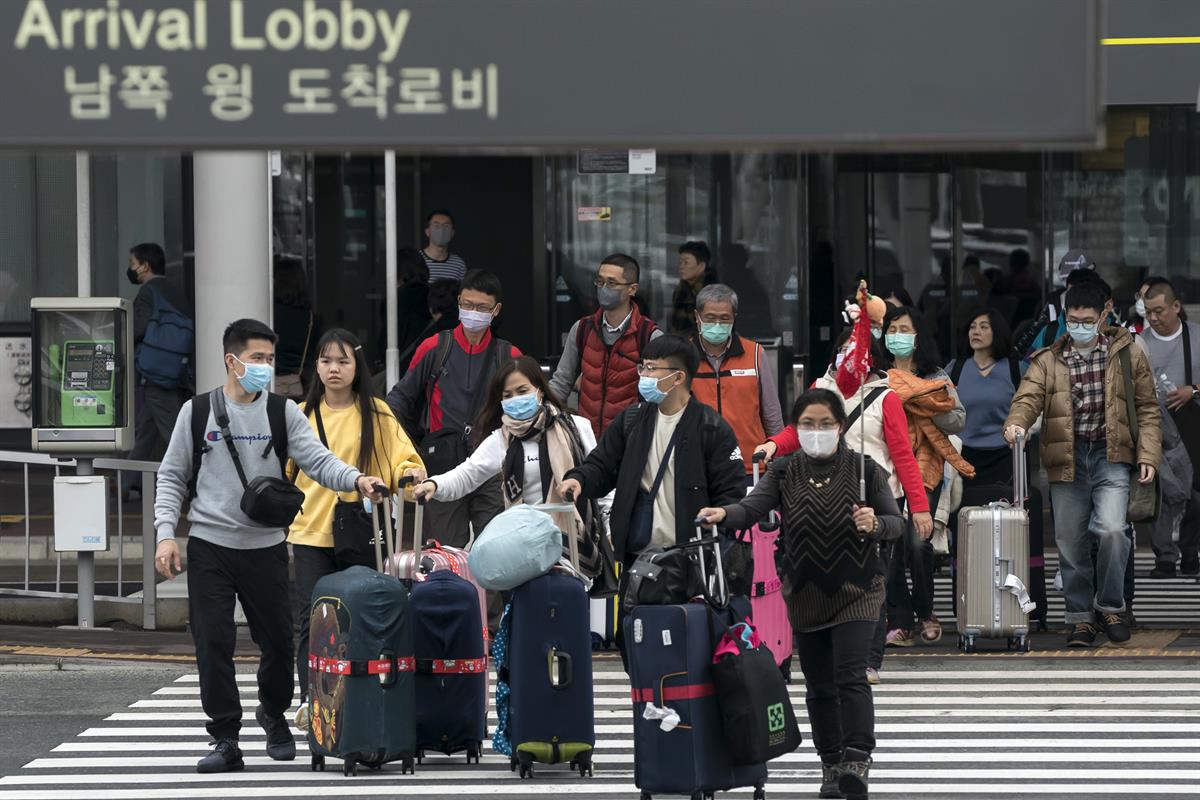 Following the advice of the Emergency Committee today, WHO Director-General has declared the outbreak of novel coronavirus (2019-nCoV) a Public Health Emergency of International Concern. In China, more than 7700 cases have been confirmed, and 170 people have died. There are 82 additional cases confirmed in 18 countries.

Proceedings of the meeting

Members and advisors of the Emergency Committee were convened by teleconference

The Director-General welcomed the Committee and thanked them for their support. He turned the meeting over to the Chair, Professor Didier Houssin.

Professor Houssin also welcomed the Committee and gave the floor to the Secretariat.

A representative of the department of compliance, risk management, and ethics briefed the Committee members on their roles and responsibilities.

Committee members were reminded of their duty of confidentiality and their responsibility to disclose personal, financial, or professional connections that might be seen to constitute a conflict of interest. Each member who was present was surveyed and no conflicts of interest were judged to be relevant to the meeting. There were no changes since the previous meeting.

The Chair then reviewed the agenda for the meeting and introduced the presenters.

Representatives of the Ministry of Health of the People’s Republic of China reported on the current situation and the public health measures being taken. There are now 7711 confirmed and 12167 suspected cases throughout the country. Of the confirmed cases, 1370 are severe and 170 people have died. 124 people have recovered and been discharged from hospital.

The WHO Secretariat provided an overview of the situation in other countries. There are now 83 cases in 18 countries. Of these, only 7 had no history of travel in China. There has been human-to-human transmission in 3 countries outside China. One of these cases is severe and there have been no deaths.

At its first meeting, the Committee expressed divergent views on whether this event constitutes a PHEIC or not. At that time, the advice was that the event did not constitute a PHEIC, but theCommittee members agreed on the urgency of the situation and suggested that the Committee should continue its meeting on the next day, when it reached the same conclusion.

This second meeting takes place in view of significant increases in numbers of cases and additional countries reporting confirmed cases.

The Committee welcomed the leadership and political commitment of the very highest levels of Chinese government, their commitment to transparency, and the efforts made to investigate and contain the current outbreak. China quickly identified the virus and shared its sequence, so that other countries could diagnose it quickly and protect themselves, which has resulted in the rapid development of diagnostic tools.

The very strong measures the country has taken include daily contact with WHO and comprehensive multi-sectoral approaches to prevent further spread. It has also taken public health measures in other cities and provinces; is conducting studies on the severity and transmissibility of the virus, and sharing data and biological material. The country has also agreed to work with other countries who need their support. The measures China has taken are good not only for that country but also for the rest of the world.

The Committee acknowledged the leading role of WHO and its partners.

The Committee also acknowledged that there are still many unknowns, cases have now been reported in five WHO regions in one month, and human-to-human transmission has occurred outside Wuhan and outside China.

The Committee believes that it is still possible to interrupt virus spread, provided that countries put in place strong measures to detect disease early, isolate and treat cases, trace contacts, and promote social distancing measures commensurate with the risk. It is important to note that as the situation continues to evolve, so will the strategic goals and measures to prevent and reduce spread of the infection. The Committee agreed that the outbreak now meets the criteria for a Public Health Emergency of International Concern and proposed the following advice to be issued as Temporary Recommendations.

The Committee emphasized that the declaration of a PHEIC should be seen in the spirit of support and appreciation for China, its people, and the actions China has taken on the frontlines of this outbreak, with transparency, and, it is to be hoped, with success. In line with the need for global solidarity, the Committee felt that a global coordinated effort is needed to enhance preparedness in other regions of the world that may need additional support for that.

The Committee welcomed a forthcoming WHO multidisciplinary technical mission to China, including national and local experts. The mission should review and support efforts to investigate the animal source of the outbreak, the clinical spectrum of the disease and its severity, the extent of human-to-human transmission in the community and in healthcare facilities, and efforts to control the outbreak. This mission will provide information to the international community to aid in understanding the situation and its impact and enable sharing of experience and successful measures.

The Committee wished to re-emphasize the importance of studying the possible source, to rule out hidden transmission and to inform risk management measures

The Committee also emphasized the need for enhanced surveillance in regions outside Hubei, including pathogen genomic sequencing, to understand whether local cycles of transmission are occurring.

WHO should continue to use its networks of technical experts to assess how best this outbreak can be contained globally.

WHO should provide intensified support for preparation and response, especially in vulnerable countries and regions.

Measures to ensure rapid development and access to potential vaccines, diagnostics, antiviral medicines and other therapeutics for low- and middle-income countries should be developed.

WHO should continue to provide all necessary technical and operational support to respond to this outbreak, including with its extensive networks of partners and collaborating institutions, to implement a comprehensive risk communication strategy, and to allow for the advancement of research and scientific developments in relation to this novel coronavirus.

WHO should continue to explore the advisability of creating an intermediate level of alert between the binary possibilities of PHEIC or no PHEIC, in a way that does not require reopening negotiations on the text of the IHR (2005).

WHO should timely review the situation with transparency and update its evidence-based recommendations.

The Committee does not recommend any travel or trade restriction based on the current information available.

The Director-General declared that the outbreak of 2019-nCoV constitutes a PHEIC and accepted the Committee’s advice and issued this advice as Temporary Recommendations under the IHR.

To the People’s Republic of China

• Implement a comprehensive risk communication strategy to regularly inform the population on the evolution of the outbreak, the prevention and protection measures for the population, and the response measures taken for its containment.

• Enhance public health measures for containment of the current outbreak.

• Ensure the resilience of the health system and protect the health workforce.

• Collaborate with WHO and partners to conduct investigations to understand the epidemiology and the evolution of this outbreak and measures to contain it.

• Continue to identify the zoonotic source of the outbreak, and particularly the potential for circulation with WHO as soon as it becomes available.

• Conduct exit screening at international airports and ports, with the aim of early detection of symptomatic travelers for further evaluation and treatment, while minimizing interference with international traffic.

It is expected that further international exportation of cases may appear in any country. Thus, all countries should be prepared for containment, including active surveillance, early detection, isolation and case management, contact tracing and prevention of onward spread of 2019-nCoVinfection, and to share full data with WHO. Technical advice is available on the WHO website.

Countries are reminded that they are legally required to share information with WHO under the IHR.

Any detection of 2019-nCoV in an animal (including information about the species, diagnostic tests, and relevant epidemiological information) should be reported to the World Organization for Animal Health (OIE) as an emerging disease.

Countries should place particular emphasis on reducing human infection, prevention of secondary transmission and international spread, and contributing to the international response though multi-sectoral communication and collaboration and active participation in increasing knowledge on the virus and the disease, as well as advancing research.

The Committee does not recommend any travel or trade restriction based on the current information available.

Countries must inform WHO about travel measures taken, as required by the IHR. Countries are cautioned against actions that promote stigma or discrimination, in line with the principles of Article 3 of the IHR.

The Committee asked the Director-General to provide further advice on these matters and, if necessary, to make new case-by-case recommendations, in view of this rapidly evolving situation.

To the global community

As this is a new coronavirus, and it has been previously shown that similar coronaviruses required substantial efforts to enable regular information sharing and research, the global community should continue to demonstrate solidarity and cooperation, in compliance with Article 44 of the IHR (2005), in supporting each other on the identification of the source of this new virus, its full potential for human-to-human transmission, preparedness for potential importation of cases, and research for developing necessary treatment.

Provide support to low- and middle-income countries to enable their response to this event, as well as to facilitate access to diagnostics, potential vaccines and therapeutics.

Under Article 43 of the IHR, States Parties implementing additional health measures that significantly interfere with international traffic (refusal of entry or departure of international travellers, baggage, cargo, containers, conveyances, goods, and the like, or their delay, for more than 24 hours) are obliged to send to WHO the public health rationale and justification within 48 hours of their implementation. WHO will review the justification and may request countries to reconsider their measures. WHO is required to share with other States Parties the information about measures and the justification received.

The Emergency Committee will be reconvened within three months or earlier, at the discretion of the Director-General.

The Director-General thanked the Committee for its work.