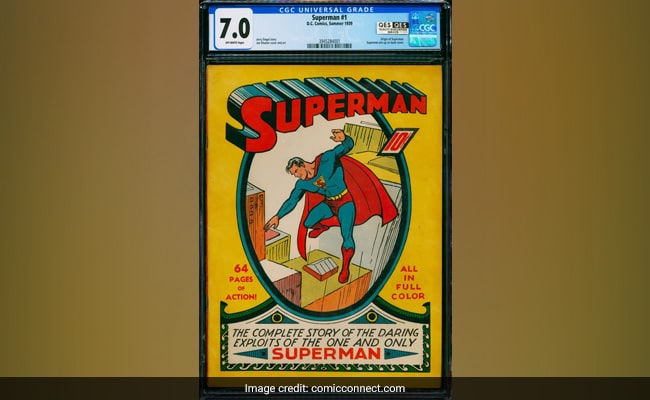 A rare copy of a Superman #1 comic book was sold for $2.6 million (roughly ₹ 19.76 crores) at an auction through ComicConnect, an online auction house. Thirty people had bid for the book.

This particular edition sold in the newsstands in 1939 for a paltry 10 cents and featured the superhero's origin story as Clark Kent. It was created by Jerry Siegel and Joe Shuster, and “introduced three of the most important supporting characters in the Superman pantheon: Ma and Pa Kent, as well as Lois Lane”, stated ComicConnect, the online auction company. It also contains the first mention of Krypton.

The issue was sold in the online auction on December 16, and the buyer preferred to remain anonymous.

The cover of the comic — The complete story of the daring exploits of the one and only Superman — had the superhero leaping over tall buildings. The 64-pages, full-colour issue has changed hands just twice — the first time being in 1939 from the newsstand, and then to its current owner — the seller at the auction, Mark Michaelson — about 40 years ago, who has since then kept the issue in a temperature-controlled safe.

ComicConnect stated that this issue — “a never-before-seen example of Superman #1” — was “a must-read for Man of Steel zealots”. Outlining the iconic status of Superman, the ComicConnect website added that “the big red ‘S' on his chest is one of the most-easily-recognised symbols in the world”.

Metropolis/ComicConnect founder and COO Vincent Zurzolo said that the “cover inks are rich and the interior pages supple”. Mr Zurzolo added that what made this book even more special is that “the consignor met his wife at NYCC twelve years ago at the ComicConnect booth”.

Metropolis Collectibles also shared a video on YouTube about the book:

The ComicConnect website also states that “Superman illustration on the cover”, created by Joe Shuster, “looks just as sharp today as it did when this issue was released”.

In April, ComicConnect had stated that they had sold a copy of Action Comics #1, the comic that introduced Superman in 1938, for $3.25 million (roughly ₹ 24.7 crores).