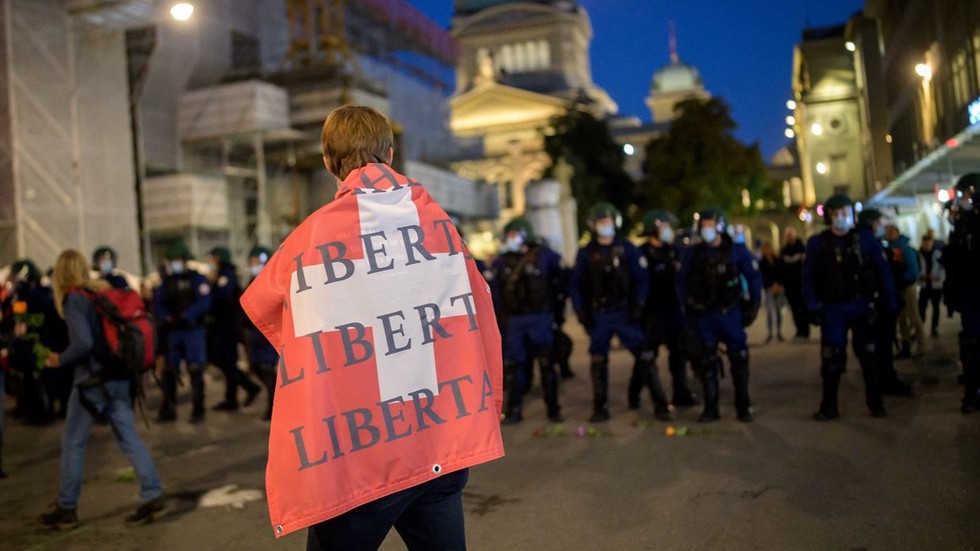 Thursday’s rally against the coronavirus measures was officially canceled by organizers and banned by the authorities, but a large number of people still turned up and marched through the city, chanting “freedom” and booing the police.

As night fell, the authorities responded by turning water cannons on the protesters. One journalist captured footage of riot police firing tear gas grenades as well.

Some of the protesters threw objects back at the police, while blowing whistles and booing.

Earlier videos and photos from Bern show crowds gathering at a transit station and chanting "Liberte!" – 'freedom' in French, one of the languages used in Switzerland. The same chant has been used in the neighboring France to protest Covid-19 passports.

Another video shows a crowd peacefully marching down the streets of Bern.

Police had been on high alert since morning, however, erecting a fence barrier around the Bundeshaus, the seat of the Swiss parliament.

Last Thursday, protesters against the newly implemented Covid-19 passes clashed with police outside the parliament building. Bern security director Reto Nause described it as an attempt to “storm the federal palace,” and the authorities responded by dispersing demonstrators with water cannons and banning future “unauthorized” rallies.

Citing a rise in the number of coronavirus cases, Switzerland rolled out mandatory Covid-19 passports effective September 13. The certificate shows proof of vaccination, recovery or recent negative test result, and has to be presented to enter restaurants, bars, gyms or other indoor public spaces. The measure is scheduled to expire in January 2022.